FUNNY CAR CHAOS IS A HIT IN AMARILLO 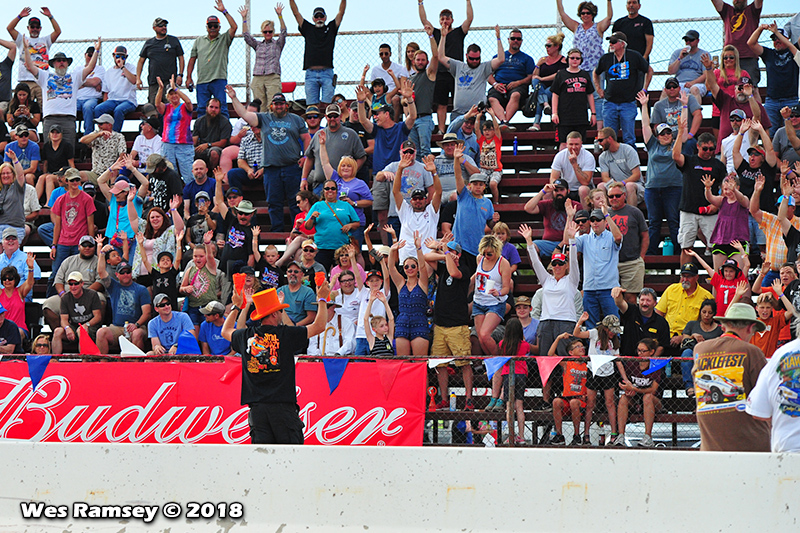 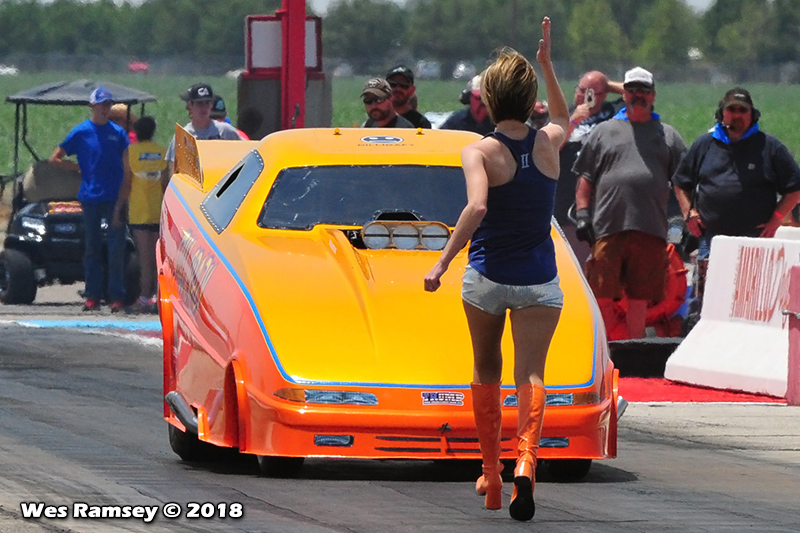 On June 1st and 2nd history was relived for drag racing fans from across the Texas panhandle as Funny Car Chaos thundered into Amarillo Dragway. This marked the first time nitro-fueled drag racing machines and funny cars of any type had been through the gates of the facility in nearly 30 years. Anticipation for this flip top frenzy was overwhelming, and fans were treated to two days of drag racing that seemed to have been pulled right from the archives of this historic facility. A track where world champions were once crowned, battles between west coast and east coast were settled and the biggest names in drag racing showcased their talents under the eyes of tens of thousands of hot rod enthusiasts.

Those days were long gone for Amarillo Dragway, through a series of ownership changes and lack of headline events, this gem of our sport was revived in so many ways with the running of Funny Car Chaos, the newest thing to hit funny car racing. Bringing in a unique and widely appealing 'no rules' format, any engine combination and body style is permitted to compete in Funny Car Chaos. This open rulebook approach debuted last fall and had funny car racers previously restricted by limitations and expensive financial requirements excited at a new opportunity. FC Chaos enables racers on a budget to competitively race and with a fair chance to win the guaranteed payouts reaching well over $25,000. Full fields have been the norm in these high stakes flip top showdowns. Riding momentum from two very successful events at North Star Dragway last fall and Mo-Kan Dragway this April, the Funny Car Chaos team didn't hesitate to book the thrilling show at such a historically rich track as Amarillo Dragway. This marked the second of four events on tap for the 2018 season.

The weekend was headlined by sixteen outlaw funny cars from across the country showcasing a wide range of power combinations and body styles. Nearly fifty Dirty South Gassers were in attendance with their gear slamming straight axle racers also including a dozen vintage Nostalgia Super Stockers. Toss in an eight-car field of blown altereds, and front engine dragsters and twelve big tire no-time 'list' racers battling for bragging rights and you've got a drag racing rock show, unlike anything these fans have ever seen. Friday and Saturday night were capped off with flame-throwing jet car action that brought the fans to their feet. 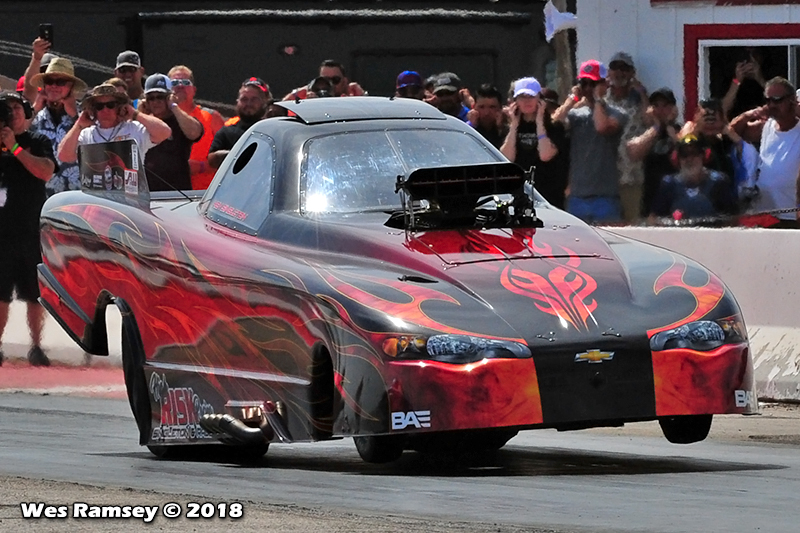 Friday welcomed less than favorable conditions with a record high temperature of 107 degrees and sustained wind gusts of 25-30 mph filled with dirt and debris picked up as the weather system charged across the Texas plains. An incredible effort was put forth by the Funny Car Chaos staff including promoter Chris Graves, race director Bubba Corzine and staging lane director Justin Haas combined with the staff at Amarillo Dragway. The end result after hours of track conditioning was an on-time start for the first of two qualifying sessions at 7 p.m. as fans barged through the gates and filled the stands eager for Friday night funny car action. Sixteen cars would be split into two fields as 'A' and 'B' classes of eight would compete on Saturday for Funny Car Chaos glory, awarding two winners on the weekend.

Ken Singleton brought his blown alcohol 2006 Monte Carlo ex. Jimmy Jones TA/FC to the contest fresh off his impressive domination of the previously held at Mo-Kan Dragway in April. Singleton and company put the "High Risk" entry back on top immediately with a 4.18 at 149 mph to take the number one qualifying position after Friday's sessions. Reno, Nevada's Chris Morel posted a 4.31 at 169 mph to secure the "Little City Cuda" in the number two spot of the 'A' field. Mike Newkirk's "Girl Watcher" 2002 Avenger bodied Kansas based alcohol burner nabbed the number three spot with a 4.34 at 152 mph. Local favorite Clay Cunningham and the "Still Crazy" 1996 Dodge Daytona rounded out the top half of the elite eight with a 4.80 at 142 mph as teams struggled early to find the right combination for the tricky surface and challenging altitude. 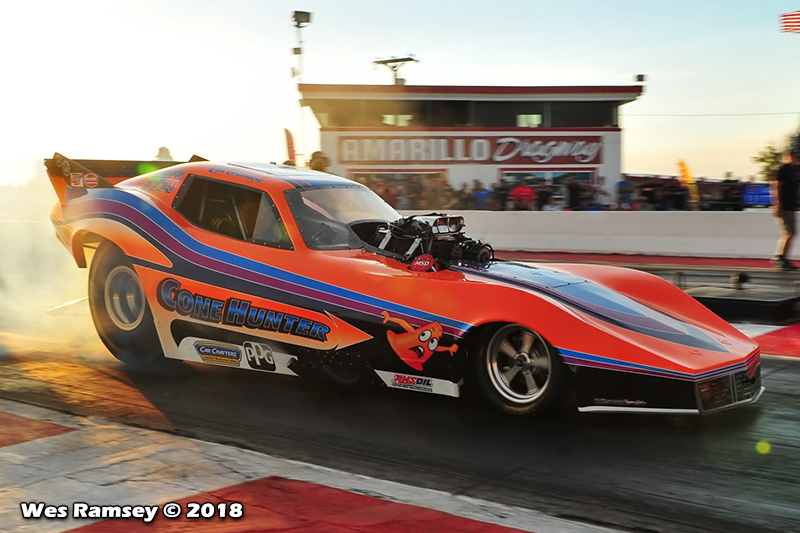 A very welcoming cool down on Saturday brought much more favorable conditions with high temperatures in the upper 80's and a full line-up of drag racing action. The busy starting line helped develop the fresh rubber and traction the funny cars needed and performances increased drastically throughout the day. Upon conclusion of the final qualifying session Saturday afternoon, the fields were set, and it was time to line em' up and let em' rip in Amarillo with the total purse surpassing $28,000 in payouts and bonuses.

The heads up and rules free "Outlaw Nostalgia Shootout" class came down to local runner Wyatt Curbo from Dumas, Texas in his nitrous assisted front engine dragster against John Sliney from Haslet, Texas in his blown slingshot rail. Curbo clicked off a 4.70 at 146 mph to take the win over Sliney's 4.84 at 143 mph in a memorable moment for the local who spent his childhood enjoying the drag races at Amarillo Dragway.

Funny car action was hot and heavy in the 'B' field as top qualifier Nick Poloson thundered through the competition in the "Bucket List" 1992 Dodge Avenger bodied nitro burner owned by Gary Doak of Kerrville, Texas. Poloson defeated Tom Furches and Robert Slaughter en route to his first Funny Car Chaos final to take on fellow fuel burner Ray Stringer. Stringer's winning rounds eliminated Larry Bradford and Mike Buchanan as the New Mexico based "Blown Cent-less" team charged into their first FC Chaos final. Stringer was pulling double duty driving two funny cars at this event, luckily for him the "Wayne's World" car owned by Wayne Reinart qualified in the 'A' field while the Stringer family-owned entry was slotted in the 'B' allowing him to swap rides just in time. 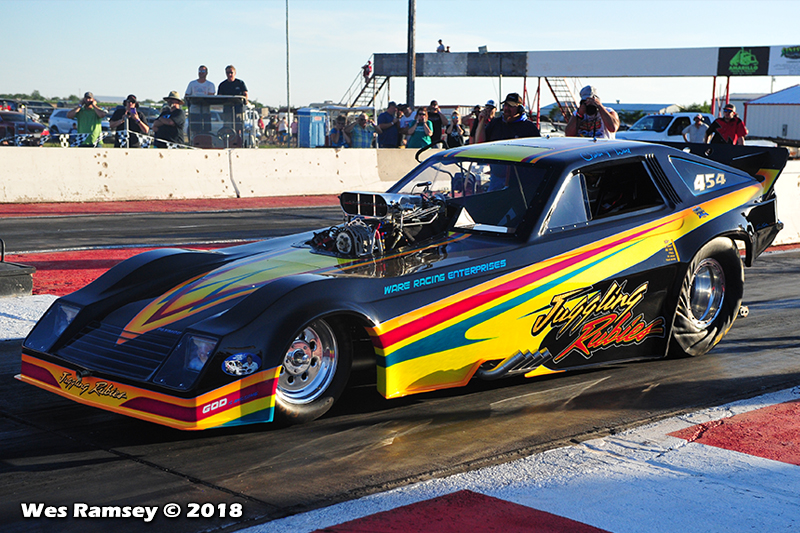 As the duo of fuel floppers crept into the beams, the crew chiefs made their final adjustments and sent their drivers into stage position. Stringer was off the line first by a slim margin which had been made up by the sixty foot by Poloson as he charged into the lead and pulled ahead at half-track. As they neared the stripe it was all Poloson with a 4.42 at 170 mph taking the win over Stringer's 4.85 at 161 mph in a fine drag race to kick off the final rounds. For Poloson, Doak and company this was a huge win for the newly formed team that fought many struggles prior to their success in Amarillo. With their hard work and well-earned victory, the "Bucket List" team has confirmed their attendance at the remaining two Funny Car Chaos events this season at Central Illinois Dragway in July and North Star Dragway in September. Congratulations to the entire team on a fine effort. 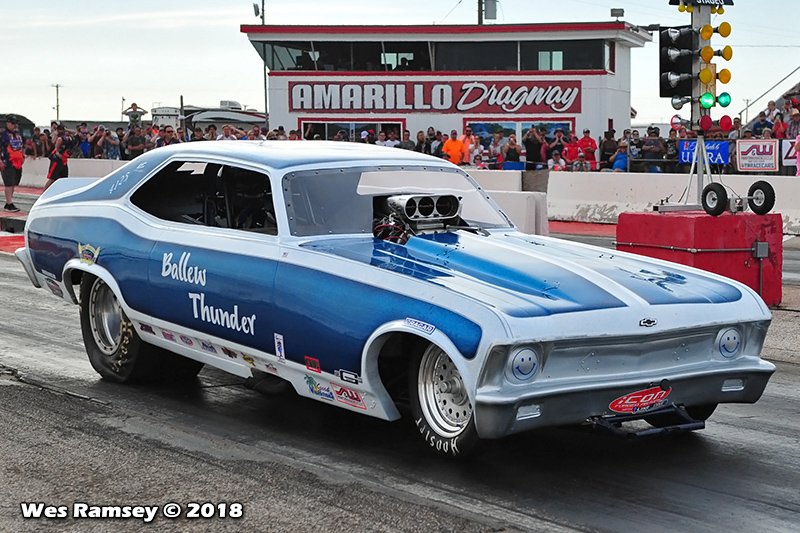 The elite eight cars on the property made up the 'A' field as the top qualifiers after three sessions. Red hot Ken Singleton continued his winning ways by eliminating Jordan Ballew and Clay Cunningham on his march to back to back final round appearances. His opponent was the newest funny car to call New Mexico home as Lyle Greenberg's "Cone Hunter" 1978 Corvette bodied nitro burner made it's competition debut here this weekend. Greenberg marched past two higher qualified racers in Chris Morel and Mike Newkirk to secure his final round position. Singleton had posted the best numbers of the weekend with a 4.03 and 4.01 while Greenberg had stepped his game up each round with a 4.31 and 4.26 respectively. On paper there was a clear favorite, but this drag race was certainly one not to be influenced by numbers.

Two stunning funny cars both capable of winning most any car show in the "highly modified" category came to life as the final pair of funny cars was set to do battle with $5,000 and massive bragging rights on the line. Singleton hoped to become the first ever back to back winner of Funny Car Chaos while Greenberg looked to cap off a dream weekend by winning in his debut event in his jaw-dropping Corvette. The drivers were given the go-ahead by their crew chiefs and at the flash of amber; Greenberg took a slight starting line advantage. Side by side they charged to the finish line as Singleton started to pull ahead past half-track. Wide open and charging hard, the win light went to Singleton with a 4.01 at 179 mph to claim his second straight Funny Car Chaos win and set low elapsed time of the event in the process. Greenberg's solid 4.14 at 181 mph was his best lap of the event and second highest speed recorded on the weekend. A fantastic and thrilling final dance for the capacity crowd on hand that overwhelmed the bleachers and filled the fence line as far as the eye could see. 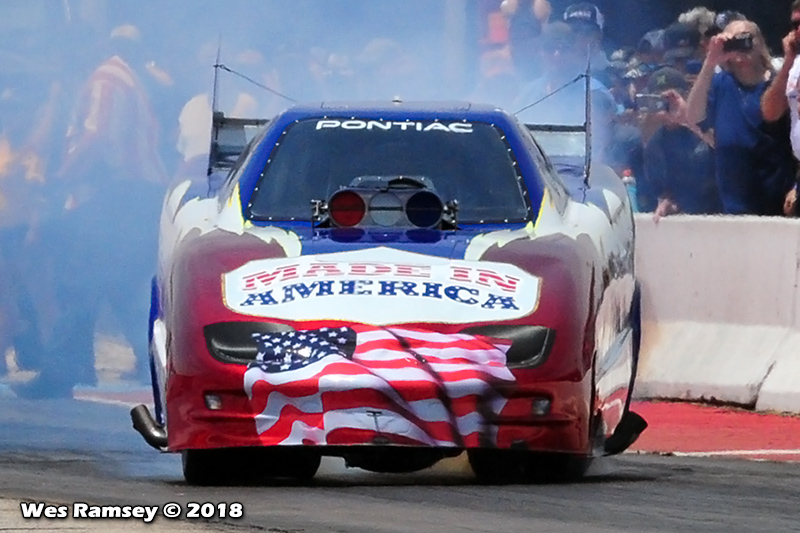 A truly historic weekend came to a conclusion with a memorable celebration in the winner's circle where fans were welcomed to join the teams on the starting line. Just a few hours prior, no one could have guessed how the results would pan out and the excitement of the eliminations thrilled spectators and racers alike throughout the day. Endless smiles and congratulations were offered from fellow competitors and media representatives as the winners circle concluded with feature winner Ken Singleton who claimed his second $5,000 win of the year in Funny Car Chaos competition.

Congratulations to all the personnel involved in hosting this pivotal event for Amarillo Dragway as the fire has been reignited for the new ownership and longtime drag racing fans of the Texas plains. A true funny car fraternity has formed with the racers who continue to support Funny Car Chaos, offering a very fresh and unique racing program that has proven to be one of friendships and fun with a side of nitro fumes and cash money. Support from major sponsors Red Line Shirt Club, AutoNation Chevrolet of Amarillo, Best of Texas BBQ Sauce, PatCon LLC, DJ Safety, S&W Race Cars, Arenas Transmissions, Dutcher's Auto Repair & Collision and Max Cackle Photos with additional support from numerous bonus program sponsors. 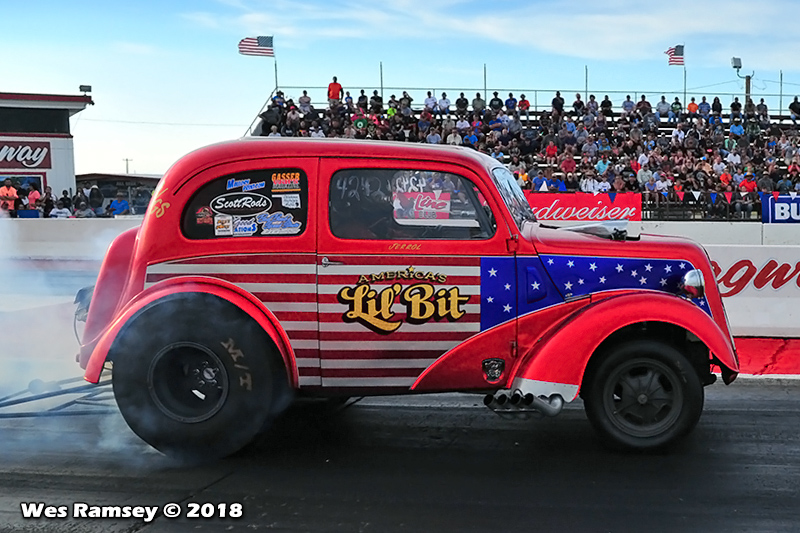 Two more events are inked for Funny Car Chaos this year with the next stop sending over 20 pre-entered outlaw funny cars through the gates of Central Illinois Dragway on July 27th-28th and the entry list is growing. This September is likely to make history as the largest Funny Car event to hit the lone star state of Texas in half a millennium as a possible 32 cars could charge into North Star Dragway in Denton, Texas on September 14th-15th.

Join the 'chaos' and find out more information on the hottest ticket in drag racing at www.funnycarchaos.com. 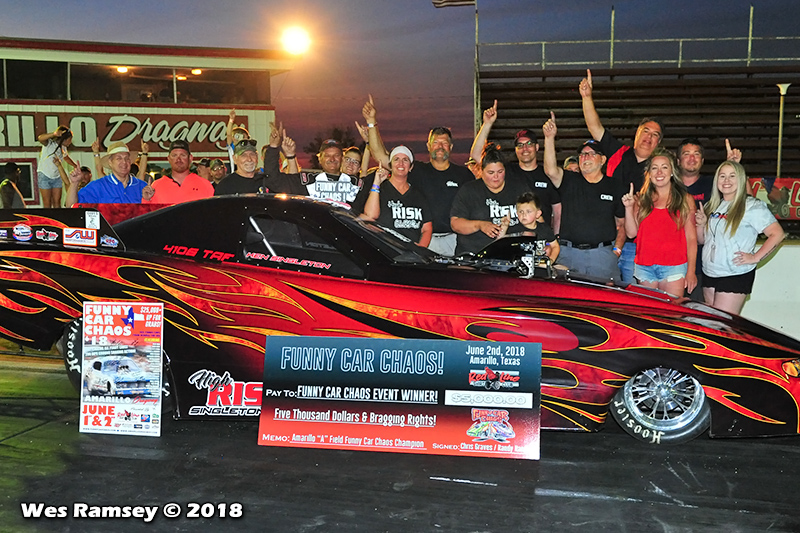 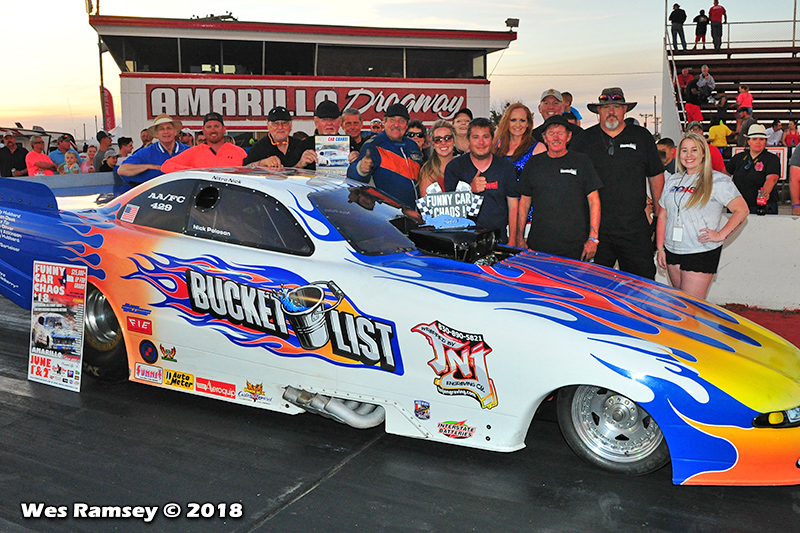 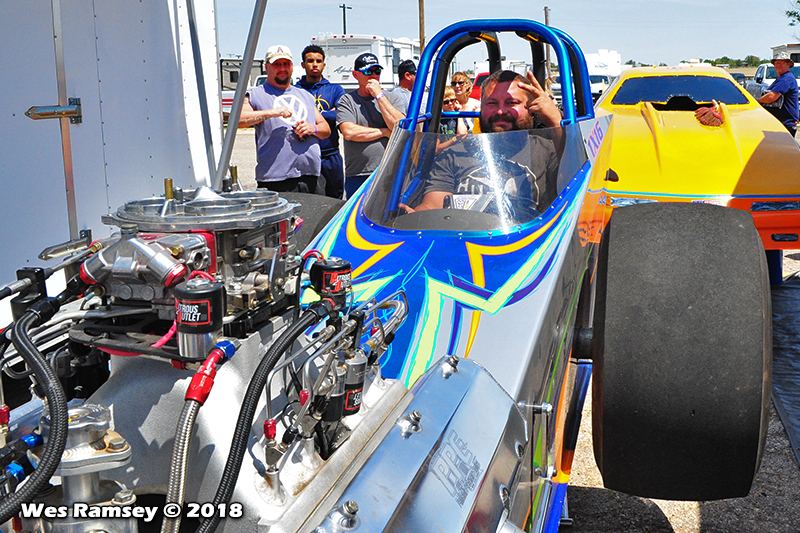 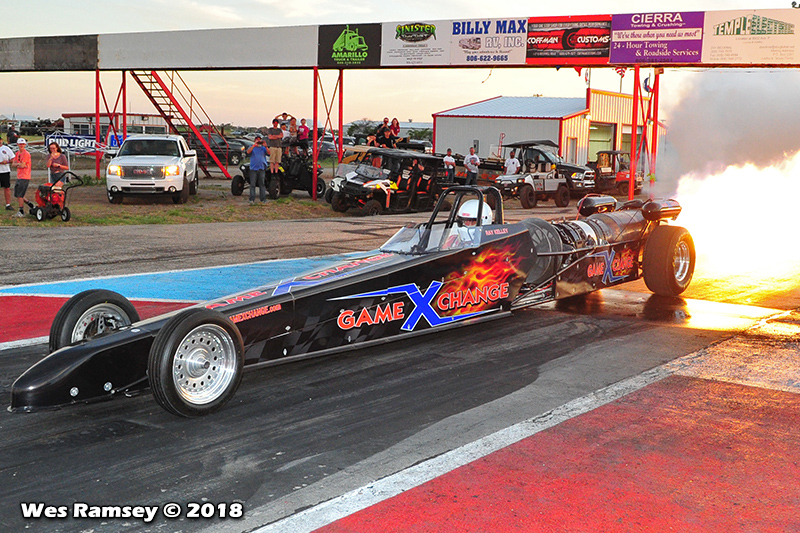