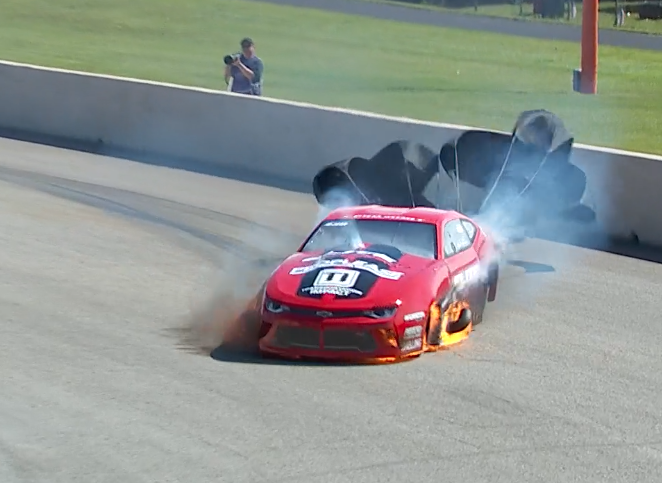 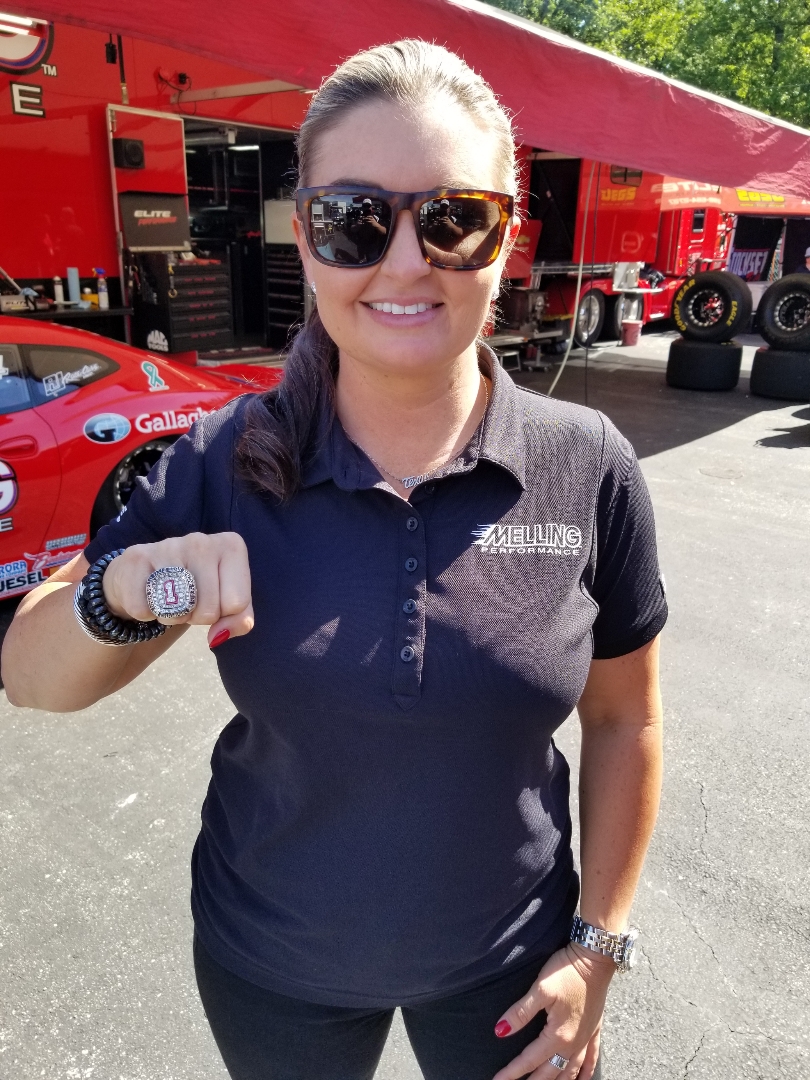 In the sport of drag racing, a racers day can go from good to bad in the blink of an eye.

With unnatural speeds and lightning quick passes all driven by machines pushed to the absolute brink of performance, just about anything can go wrong during passes that only take a few seconds from start to finish.

That point was driven home in a big way Saturday afternoon at the Summit Racing Equipment NHRA Nationals at Summit Motorsports Park as two-time Pro Stock world champion Erica Enders found herself in a fight for her life.

Doubling up in two classes, Enders was behind the wheel of her turbocharged Elite Motorsports Chevrolet Camaro in the Pro Modified class when a fire quickly turned her day from good to very, very bad.

Moments after crossing the finish line with the fastest pass in the history of the Pro Mod class with a 5.787-second pass at 261.22 mph, her motor let go, igniting a fire that immediately engulfed her car in flames and smoke. From that moment on, Enders was just along for the ride.

“I made a really great run. I put out my chutes, put the car in neutral and I guess right at the stripe it kicked the rods out of it and when it did it took out an oil line and the vibration broke the fuel system and that is what fueled the fire,” Enders said. “We run a mechanical pump on that car and it was just pumping 165-pounds of fuel pressure at 15 gallons-a-minute. So just as the motor is winding down, it is just pumping that fuel everywhere.”

That combination fueled a fire that quickly filled the car and created a dangerous situation as Enders struggled to slow the car and remove her safety equipment. She also struggled to find oxygen as the smoke and fumes instantly overwhelmed her following the completion of her run.

“It was immediate. At the stripe it just let go. I throw my chutes at the mile-per-hour cone so that they hit shortly after the finish line and then I heard the motor let go. The cockpit filled with smoke pretty quickly,” Enders said. “My initial thought was ‘don’t hit the fire bottles until you see flames.’ It is expensive and a mess to clean up, but it was right after that thought that the flames started coming up over the hood into the windshield, through the bell housing, and around the firewall.

“I was in a hurry to get the fire bottles unpinned and at that point my main focus was to stop the car as quickly as I could because you think you can hold your breath for a long time until you need your breath. And when your adrenaline is pumping in that panic situation, you need more oxygen than normal.”

Enders did eventually get the car slowed just shy of the top end, drifting the car across the track and bringing it to a stop before leaping from the car onto the track.

“Getting the car stopped was a struggle. I couldn’t see and I certainly couldn’t breath. I knew I was going slow enough at that point that if I hammered the brakes I wasn’t going to roll the car,” Enders said. “When you saw the car get sideways, I was locking the brakes up. At that point I hit my seatbelt and tried to get my window net down which was a struggle because you are blind and you are wearing those huge 20 gloves. When I got it down I just bailed.

“I was lying on the concrete on my stomach and I was telling them that my back was burning so they shot me with the fire extinguisher. The guy I was running, (Justin) Bond, when I finally got to my knees he was the first one that I saw and he helped me take my gloves and helmet off and took care of all of that for me.

“The Safety Safari picked me up and took me to the ambulance. They checked me out, got me oxygen and made sure I didn’t have too much carbon in my system. They came back to the pit a few times to check on me and make sure I was ok.”

While the experience was certainly traumatic, Enders admitted that she couldn’t let it keep her down. In fact, just a few moments later, Enders was back behind the wheel of her Elite Motorsports Pro Stock Camaro and made another pass to close out the evening.

“That was my main focus after that. I knew I was fine, it was just if the doctors would clear me and thankfully they did,” Enders said. “They came back right before I ran Pro Stock and checked my levels and I was cleared. My focus went from the fire to Pro Stock pretty quickly. I am glad that I did because I wouldn’t have wanted to go from that to not making a run going into eliminations on Sunday thinking about that.

“It is all out of my system and I am back in the car that I know is safe and I know I can handle anything that is thrown in my direction. Pro Mod is a little different, but this is my jam and I am glad to be back in Pro Stock.”

But while the initial shock is out of her system, she says she is determined to not let something like this happen again. In a class that is known for wild rides and hold-your-breath races, Enders says she wants to become an advocate for additional requirements in the class to help make Pro Mod a little safer.

“NHRA was over here this morning and that is at the top of my list now,” Enders said. “I don’t know why it is not required, but a manual fuel shutoff and then an electronic one with the system that they have at the track to deploy the chutes and kill the ignition. They should have one that shuts the fuel off. I don’t know why it isn’t that way, but it is going to be that way at least on my car if it is not implemented for the entire class. That is a huge safety issue.

“I already had a list of things that I was changing on my car. I was leaving here and going to Rick Jones’ shop prior to the fire to get some safety features added to it. I always try to take the positive from any situation and that is what it is going to be. I am going to become a safety advocate for the class and make sure that people don’t have to go through what we went through yesterday.

“It was very unfortunate and extremely uncalled for. I am just glad that I am OK. The car is pretty damaged. Just evaluating what happened it caused about $100,000 worth of damage to get it back to the track. But at the end of the day, equipment can be replaced, but people can’t. That is the most important part.”