While the exact years of drag racing's golden age are subject to endless debate, there's no doubt that the peak era for independent drag rags spanned the 1965 and '66 seasons — especially for writers, photographers, cartoonists, publishers, and ad salesmen based in southern California. This March, Drag World became the third national weekly produced in the Los Angeles area, joining long-established Drag News (since 1955) and fledgling Drag Sport Illustrated (1963).

Not every independent periodical with national ambitions came from SoCal, of course—e.g., Drag Times, Eastern Drag News, and Super Stock were all D.C.-based—but never has any other city or region exerted such control over what's now know as the flow of information.

Drag racing's golden age of publishing didn't last long (for reasons to be addressed in future issues), but it sure left us with lots of smelly newsprint to revisit and enjoy all over again; so much juicy material that we're splitting each of these glorious mid-'60s seasons into six-month segments. January-through-June issues of these and other publications were researched for this initial 1965 installment, but it was first-year Drag Worlds that kept rising to the top of our pile.

This scrappy new kid on the block appeared out of nowhere at the U.S. Fuel & Gas Championships and immediately set new standards—while breaking unwritten rules—for tabloid journalism and, yes, sensationalism. Most of the writing was done by ex-Drag News columnist Terry Cook ("New Jersey News"), who moved west to help publisher and art director Mike Doherty launch the paper for an investor unfamiliar with drag racing. (Doherty had answered an L.A. Times classified ad offering financial backing to would-be entrepreneurs with money-making ideas.)

Drag World's writing, typography, and graphic design far outshone the dated production values of both older independent tabloids. Cook's "On The Carpet" is arguably the best interview series ever published, pulling no punches. Now 79, Terry has recalled how "people in L.A. immediately called Drag World a 'scandal sheet.' They were so [bleeping] stupid! National Dragster was a house organ, not a real newspaper, and Drag News was mush. Drag Sport was mostly pictorial. Drag World was a real newspaper with real news."

Alas, Drag World also suffered real losses that ultimately resulted in a fire sale to AHRA (as we'll see in 1966's upcoming recap). Competing for readers was never the main challenge; there always seemed to be plenty of 25-cent buyers for all three independent weeklies. No, what was lacking was sufficient ad revenue to properly compete with "the bible," Doris Herbert's Drag News. Consequently, neither Drag World nor Drag Sport would prove sustainable for long. The colorful, brief histories of both papers -- along with a third weekly tabloid to be named later -- will unfold in coming episodes of Drag Rags.

*Editor’s Note: Some original, duplicate issues of these & other 1964 weeklies & monthlies are offered by the Wallace Family Archives’ personal library. E-mail requests to [email protected] 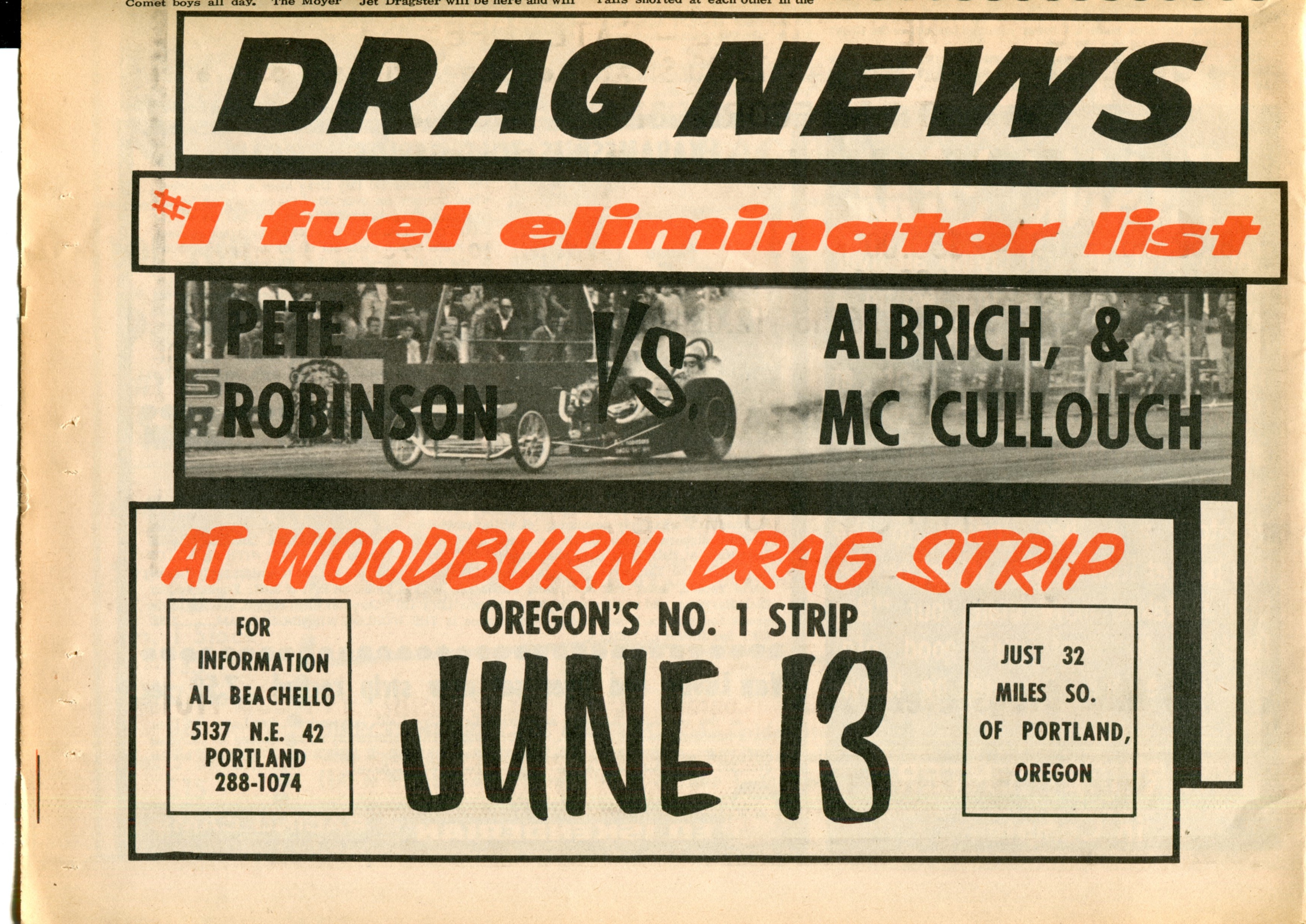 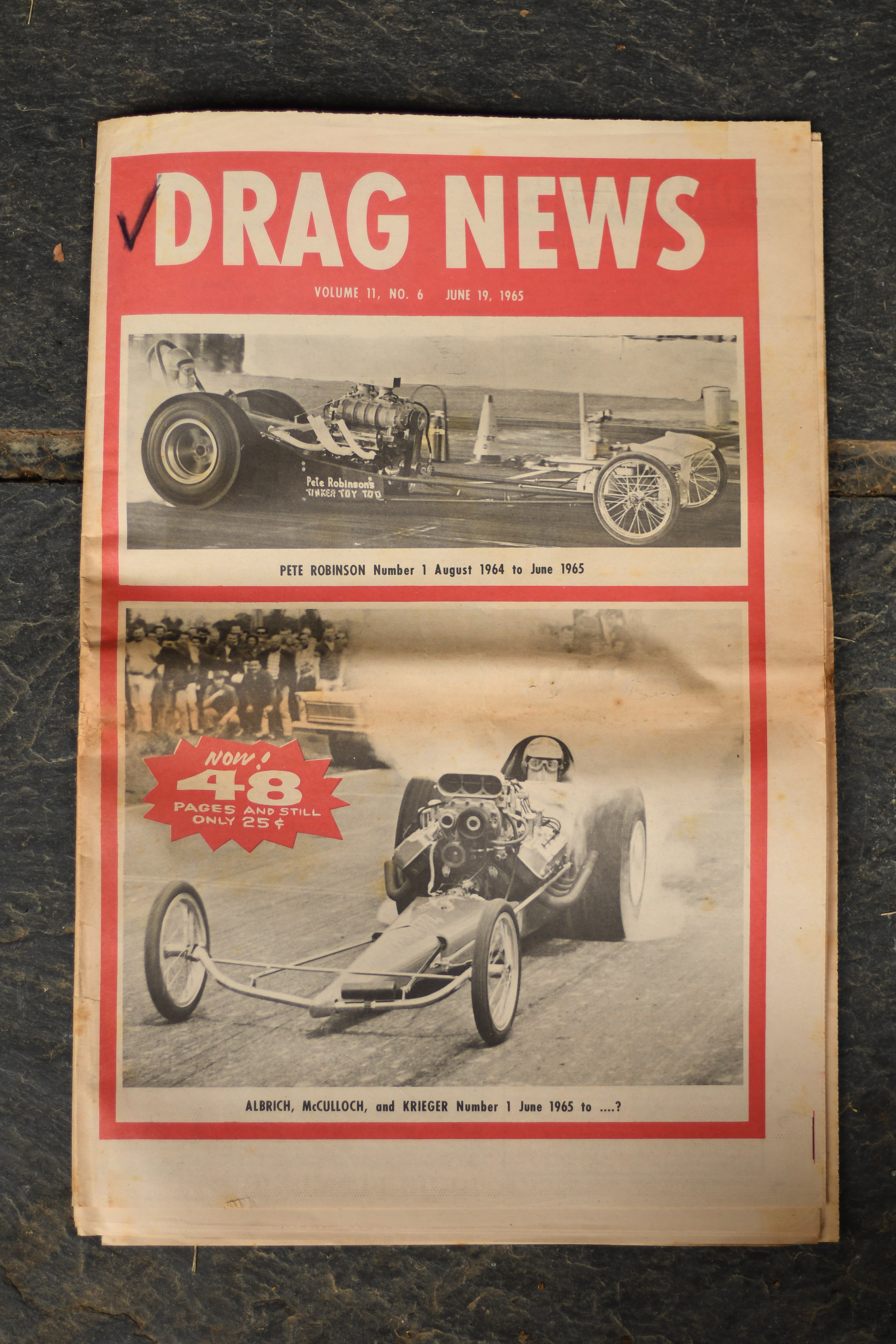