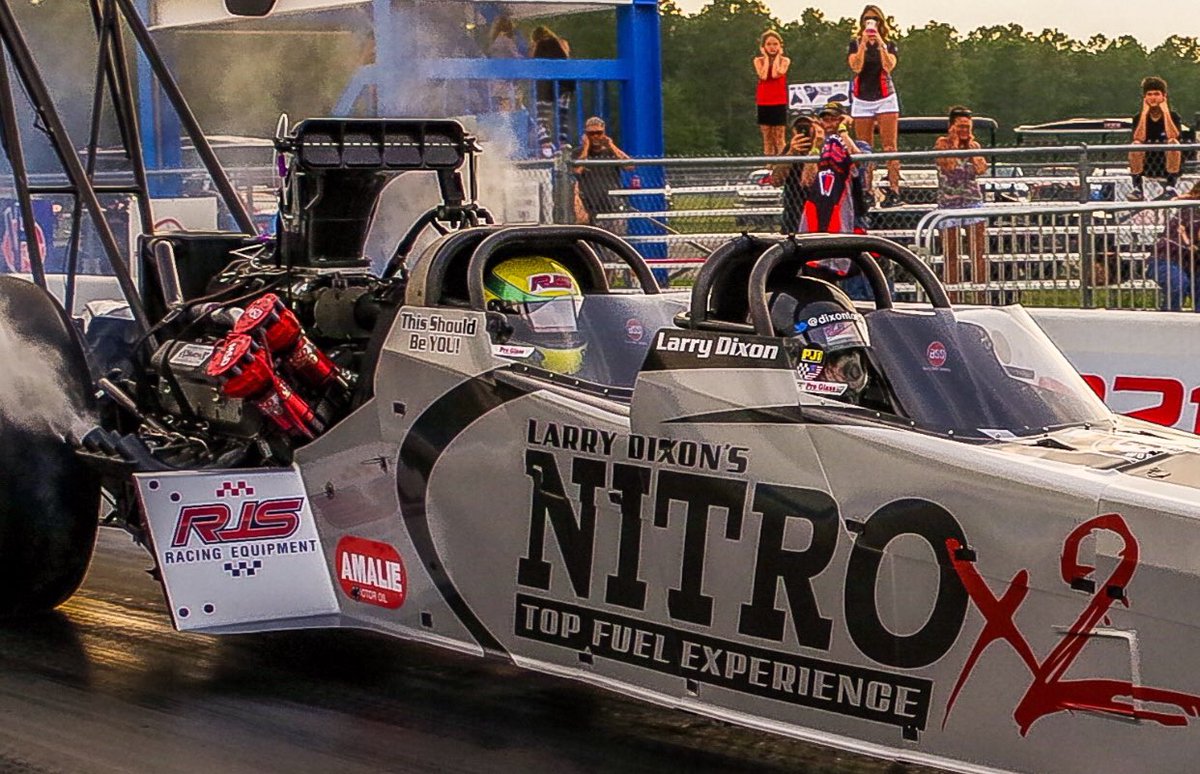 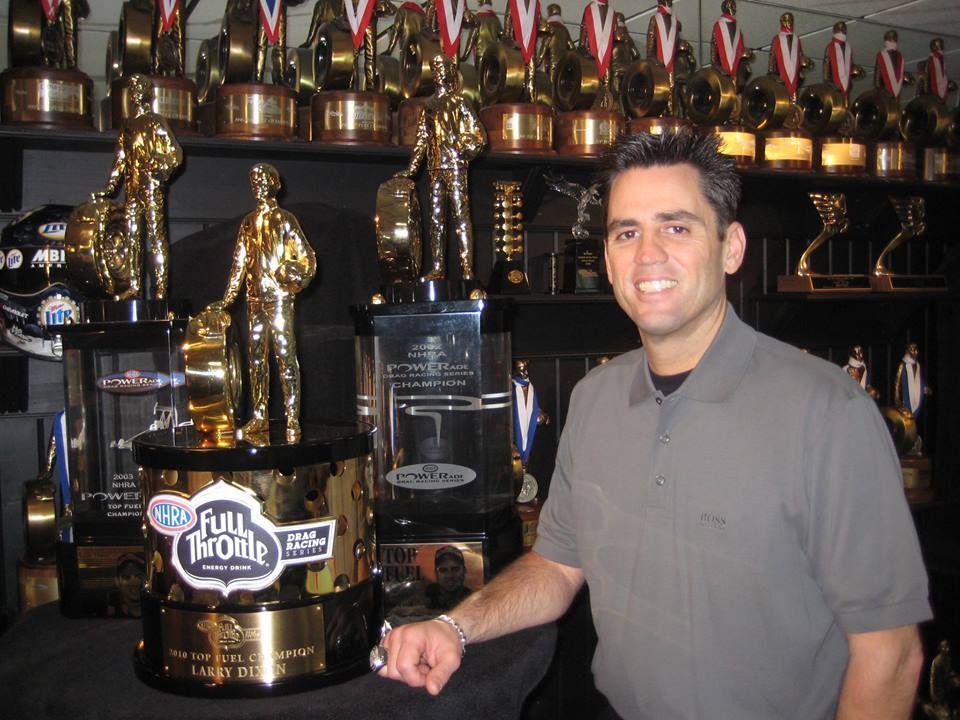 The NHRA has filed a motion to dismiss Larry Dixon’s antitrust lawsuit, leaving the case in limbo in the U.S. District Court for the Southern District of Indiana for the moment.

Almost three weeks ago at Pomona, Calif., Dixon got his first opportunity to be an instructor with B.R.A.K.E.S., the driving initiative Herbert established after the deaths of sons Jon and James in a January 2008 auto accident in North Carolina.

This weekend at Fort Wayne, Ind., Dixon again will serve as an instructor. His teenage daughter Alanna will be a student at this B.R.A.K.E.S. class. Her older brother Donovan attended a couple of years ago, and Alanna just started driving earlier this year.

He said he reached out to Herbert to become involved.

“I’m not busy 24 weekends a year like I once was. And I think it’s awesome what he’s doing. And if I can help make a difference, I’m excited about that. I’m trying to take advantage of the time that I’m not on the tour, to be able to do good things for people,” Dixon said, wanting to make sure “people don’t think I’m just sitting at home, waiting for a check from NHRA or something like that. I’m out there, trying to make a difference.

“I hate the reason why Doug did it, but I love that he’s doing it,” he said. “He’s definitely making an impact – not just on teens, but the parents, too, because there’s a lot that has changed since most parents went through a basic drivers ed course, [such as proper] hand placement on the steering wheel, There’s a lot of parents who don’t know how anti-lock brakes work and how to use them properly.”

He said it’s all about ”being better informed behind the wheel so when you have to make a split-second decision you have a little bit of knowledge on how your car operates.

“Being able to be a part of that is good. It’s not just education for the teens but for the parents, as well, so when they do go home, the parents can keep driving the message home that they learned at B.R.A.K.E.S.,” Dixon said. 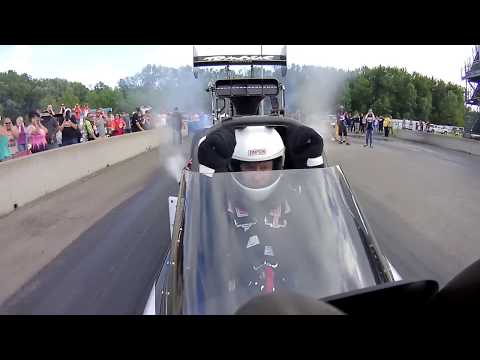 “Last week was my first week, and I got put in all roles: I’m helping set up the course, I’m chalking the lines for the course, I’m talking to the teens, I’m talking to the parents, I’m a tour guide for the parents at the different courses the teens go through as they’re learning. I’m trying to be a jack of all trades so they can plug me in any part of the course. I ran around on the skidpad. I was doing spinouts with all four wheels, so that was kind of interesting.

He said he noticed the parents ask more questions than the teens do: “Early on, it seems the kids are really quiet, that they probably got forced to be there, like, ‘Why do I have to do this? I already got my license. I’ve already gone through drivers education.’ It’s almost like a performance driving experience for the teens in the fact that you get to take your car and almost put it out of control in a controlled environment: putting the car into a slide and learning how to drive out of it.”

He said the course covers “basic things, like how you should have your seat adjusted to how you have the steering wheel adjusted to your mirrors. There’s a lot of things that get overlooked [when driving a car]. And even me just posting stuff on Facebook about it, getting response back from parents – ‘Hey, we learned a lot” . . . just that one weekend I was there I got feedback from parents, which was awesome.”

The B.R.A.K.E.S. course is set up at each location to present four classes, with about 45 students per class. So that’s 180 young drivers and their parents who come away with a much better sense of how to operate a motor vehicle.

Former Pro Stock Motorcycle competitor Vance, co-owner of Vance & Hines and one of the sport’s legends spotlighted this March at the Gatornationals, presented Herbert a check for $1 million this February during the Winternationals. His children had taken the B.R.A.K.E.S. courses, too.

“I was overwhelmed and I was proud at the same time,” Dixon said, “that a start-up motorcycle business and here he is, Terry Vance himself, donating $1 million to B.R.A.K.E.S. That was huge.”

He said, “You’re teaching parents, and you’re teaching teens – and those teens at some time are going to be parents. And word of mouth about the course [is valuable]. There were people who came over from Phoenix [about six hours away] because the wait there was too long. People drove over from Phoenix to L.A. to be able to go to one of these courses. It’s awesome to see parents that serious about wanting to help their teen out, trying to give them as much information ultimately to make them better and safer drivers when they’re out on the road.

“it’s one thing to let your teen loose in an empty parking lot somewhere. But the instructors who are at Doug’s course are police officers, Secret Service people, race-car drivers, stunt drivers that are all teaching these teens to drive. They have credentials to back up what they’re teaching them. That’s equally important, being able to learn from someone qualified to teach them,” Dixon said.

With his own two-seat project, Dixon has a chance to teach, as well.

Asked how many rides he has given so far, Dixon said, “Oh gosh, not a lot. It’s still challenging because of a lack of venues that I’m allowed to go to. I did two last year, and that was the first this year. I’ve got an event coming up after Indy, at Martin [Mich.]. And I should have three more at that event,” he said. 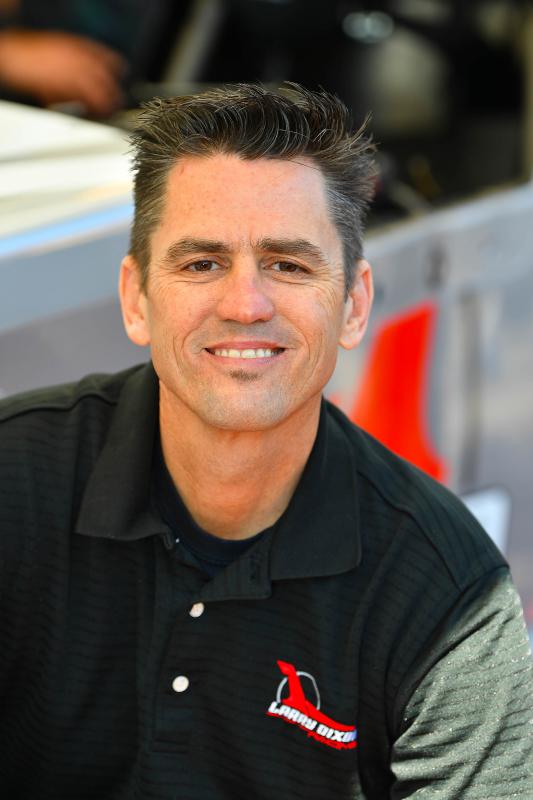 A number of NHRA-sanctioned track operators have said they would like to offer their facilities but don’t want repercussions from the sanction body if they were to permit Dixon to operate his two-seat dragster there. More than 100 non-NHRA-sanctioned dragstrips are available, but, he said, “How many of those tracks are capable of running a Top Fuel dragster at? Even with all the safety infrastructure, it’s really hard. There might be 10 in the country I’m allowed to run at, and there’s none west of Texas. So it makes it a little challenging.”

However, he said, “The Eddyville event was awesome. The track booked me. They paid for the ride. And what they did was they created a VIP package for race fans, where if you paid $100 and you got two days admission, and you got a hat and a T-shirt and a chance for a free ride in the two-seater – which I thought was awesome. My intentions for the car weren’t to go door to door, trying to sell rides to race fans, The intention was that fans were going to get an opportunity to ride in a car for free and doing these types of events, whether the track puts it on or a vendor or some type of company.

“To see Eddyville be the first one to step up and do that, I’m very appreciative to them for taking a chance on it,” he said. “It’s still a new deal, but it’s very successful from the event side of things. I was really happy with it and hopefully as time progresses, we’ll get more opportunities like that. I’m really appreciative of everybody at Eddyville for taking a chance. And I’m glad it worked out for them. And hopefully more tracks will want to do something similar.”

Meanwhile, the lawsuit is something that’s hanging over his plans.

Dixon took legal action against the Glendora, Calif., organization April 11 in Indianapolis, accusing officials of wrongfully suspending him two years ago, depriving him of his livelihood for more than a year, and not following its own rulebook.

“Now [the case] is at the point to where it goes to a judge to take a look at the case and see if it’s worthy of proceeding. They could throw it out and say, ‘No, you can’t field suit against them.’ Or they could say, ‘Yeah, you’ve got reasonable cause, and we’re going to go through with this.’ That’s kind of basically where it’s at. [From] everything I know, this is a long, drawn-out process – intentionally drawn out.”

The sanction body suspended Dixon indefinitely following a flap about the racer’s two-seater that was on display at the SEMA Show at Las Vegas. Dixon appealed and “won,” although its refusal to announce its reversal and refund Dixon’s appeal fee (as the rulebook dictates) has sent mixed messages to the racing community and to Corporate America. And because of that intransigence, Dixon essentially has been unable to proceed with his Top Fuel race team. (“It’s kind of hard to find funding under those circumstances,” Dixon said.)

Although the NHRA has not, per its stated policy, made public the fact it has reinstated Dixon’s competition license, or dropped restrictions, President Glen Cromwell told Competition Plus at the season-opening Winternationals that the organization had patched up its relationship with Dixon and that he would welcome Dixon back.

An unidentified fan, he said, wrote three e-mails to Josh Peterson, senior vice-president of racing operations, asking the status of Dixon’s situation. After the third message, the fan told Dixon he received a reply from Peterson, telling him the NHRA isn’t obligated to announce its ruling. “But,” Dixon said, “the rulebook says so. It left the fan disappointed, [wondering], ‘Well, the rulebook says you’re supposed to. So why aren’t you?’ And they say, ‘We don’t have to.’”

In an earlier interview with Competition Plus, Dixon said, “What I can say is if the appeal process had gone according to the rulebook, it shouldn’t have taken longer than 45 days, and that would have given me the opportunity to compete at the start of last season. And that didn’t take place. So that kept me from being able to work last year. I can’t get that year back. And this year, because this is still going on and I still have people asking me because nothing’s been posted officially on the results, I’m kind of looked at by a lot of people like I’m Pete Rose. And I don’t think that that’s fair.”

He said the extended nature of the appeals process – in which the NHRA ultimately reversed its decision – “took me out of the ’18 season, when I did have a driving opportunity, and it appears the ’19 season as well.”

That sort of stonewalling prompted Dixon to file an antitrust lawsuit, simple, he said to get answers.

He still doesn’t have them.