DELAGO, THE FREE AGENT, ENJOYS A WEEKEND AT THE TRACK 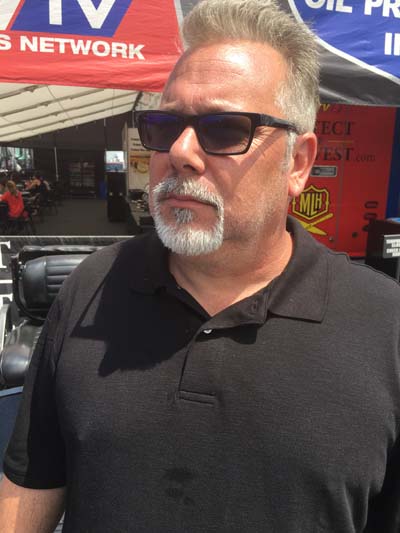 Friday at Heartland Park - Topeka, noted tuner/crewchief  Tommy DeLago made his way around the pit area. He looked every bit like a soldier without an army.

DeLago was taking in the sights and sounds of the nitro circus minus any responsibilities. He was released from his tuning role at Kalitta Motorsports earlier this week.

"I’ve learned this weekend that I actually have more people that care about me and that have been taking care of me all weekend," DeLago said with a smile. "It’s actually been a pretty good weekend so far."

DeLago struggled to remember the last time he came to an NHRA national event without a racecar to tune.

"I actually came to this race when I worked for Gilbertson’s where we missed this race one year for some reason but I did have a job so I was still getting paid," DeLago said. "But the last time I didn’t actually have a job and had to go to an NHRA race, I want to say it was 18 to 25 years ago."

DeLago, an avid San Francisco 49ers fan, understands being a crew chief on a race car presents a similar pressure level to that of an NFL Football coach. A change of scenery is necessary if only to maintain a sense of sanity.

"I read Bill Walsh’s book and I do believe, I’ve obviously never been an NFL coach so I can’t totally compare it, but from the outside looking in I think it’s a lot like being an NFL coach," DeLago said. "I try to use a lot of football analogies even when I’m training crew guys and trying to keep their mood up when we’re not running good. You’ve still got to keep the morale up. I like to think that a change of scenery is good for you but obviously there’s some people out here who work for the same team for almost ever and they seem to be very successful at it.

"For me, I’ve tried. I thought I was going to be able to retire from working with Connie’s. That’s one of the reasons why I chose to go there was because I thought this will be my last job. I also wanted to pay him back like pay it forward. He taught me a lot when I first came out racing and I was a crew guy. I wanted to come back out there and make him proud and win some races and win a championship. Well we didn’t win a championship but we did get to win Indy. At least we did a little bit of good."

While the bad news was handed down by Kalitta himself, DeLago said he was disappointed but understood drag racing is a performance-based business.

"Personally, I was okay with it. I’ve always had the thing in my mind was if I’m not wanted somewhere, I don’t want to be there. I’d rather be somewhere you’re wanted and that’s kind of what I live and die by whether it’s right or wrong."

This weekend's trip to Topeka has enabled DeLago to open up to the life which has always surrounded him, the world of networking and even spending time in the announcer's booth.

"I pretty much enjoy everything," DeLago said. "Maybe in some ways I’m kind of a little like Warren Johnson, obviously I’m not as smart, but I think some people don’t know that I am a pretty fun guy. I do like to enjoy life and I do like to have fun even though sometimes I look like I’m really serious. Sometimes it’s because I’m thinking and I’m pretty intense. But intensity and just being an angry person are two different things and I’m not an angry person, I do get intense with the task at hand. But I do like to have fun."

And fun for the man most everyone calls Tommy D, is being at the drag strip.

"Drag racing for me, it is a job," DeLago explained. "I do have responsibilities at home to pay the bills but if I was independently wealthy I would still do this. I do it with my own car on weekends that I can because it’s not a job to me, it’s who I am. I just have a passion for the sport and I’ve made a lot of friends through the years. S

"This weekend I’ve been able to just go see everybody as a friend and not have any stresses of making the sponsor happy or making the owner happy or making sure we do good so I can see my guys smile and help make them some bonus money. It’s kind of been a breath of fresh air this weekend."