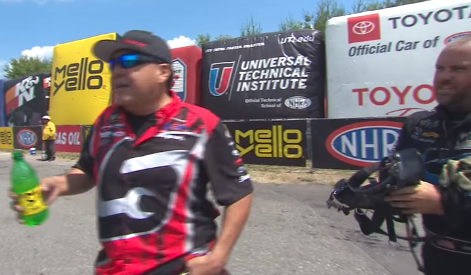 It all started with a tweet; then escalated to words exchanged on national television.

NHRA Funny Car racer Shawn Langdon expressed his dissatisfaction with what he felt was a subpar show for the fans at the NHRA New England Nationals in Epping, NH.

Langdon tweeted, “Maybe if @NHRA “thinks” 65/35 spray is good on a 135+ degree racetrack, they should refund the fans for a poor show #Q1fail #everyonewassmokingthetires”

Pedregon asked Langdon on the FoxSports broadcast, “Why you gotta badmouth the racetrack all the time?”

Langdon responded, “I was just questioning the percentages.” The drivers exchanged personal jabs at the top end before going their separate ways. Afterward, they explained their stances on Fox Sports.

“Those are my opinions, and certain people like Cruz don’t like it ... he doesn’t have to follow me on social media,” Langdon said. “He obviously had a couple of choice words at the top end. I’m not too worried about it. We are fighting for the top ten, and he’s fighting to keep that No. 11 spot. He’s got a lot of work to do. “This is only my second year, and he’s been out here 30 years. Obviously, he knows a lot more than I do; I am still out here learning. He’s looking up, and I’m looking down. I think he needs to keep focus on his crew chief job because he seems to have a lot of issues with his crew chiefs in the past, and fires them at the end of every year. If he doesn’t make the Countdown I’d hate to see him fire himself.”

“I normally don’t pay attention to social media, but I’ve been doing this for 30 years, and I have a lot of respect for the NHRA and what they do to prepare the tracks,” Pedregon said. “People that sweat their butts off and do the work on the race track. Guys that really don’t know what they are talking about are commenting how the race track is no good and bringing up temperatures. To me, that’s just a negative thing.

“We need more fans to come out here, not less. If they hear things like that, they are going to say, ‘Why will we bother to go out?”

“You gotta respect how we all make a living. That’s all. [Langdon] was bringing up irrelevant stuff that doesn’t matter. I don’t know where that came from. He’s got a lot of stuff bottled up.”