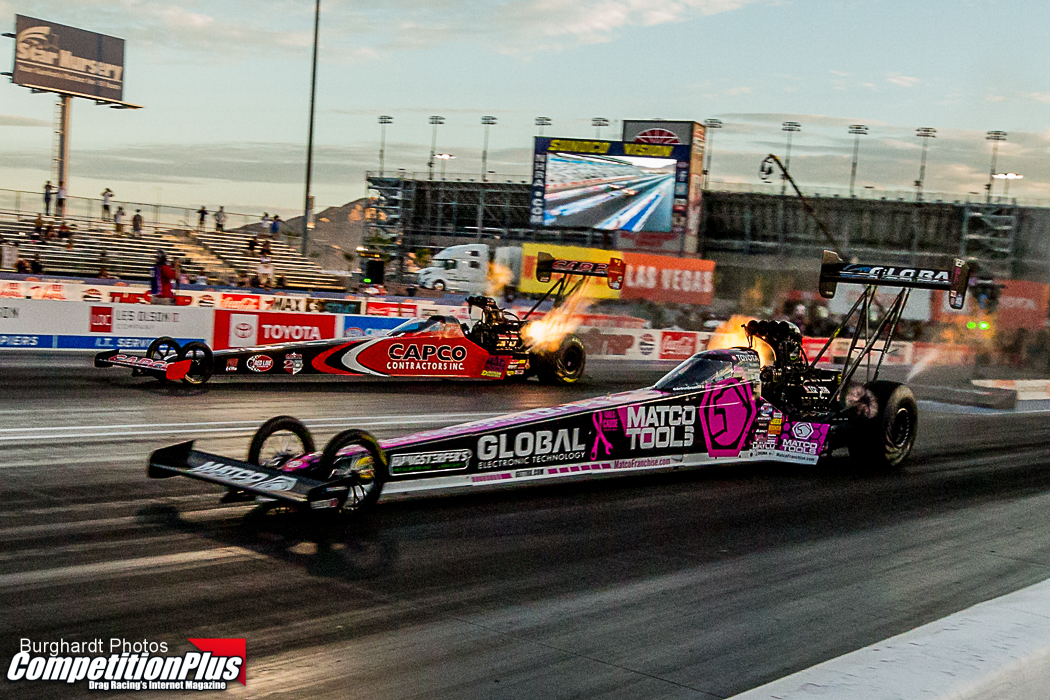 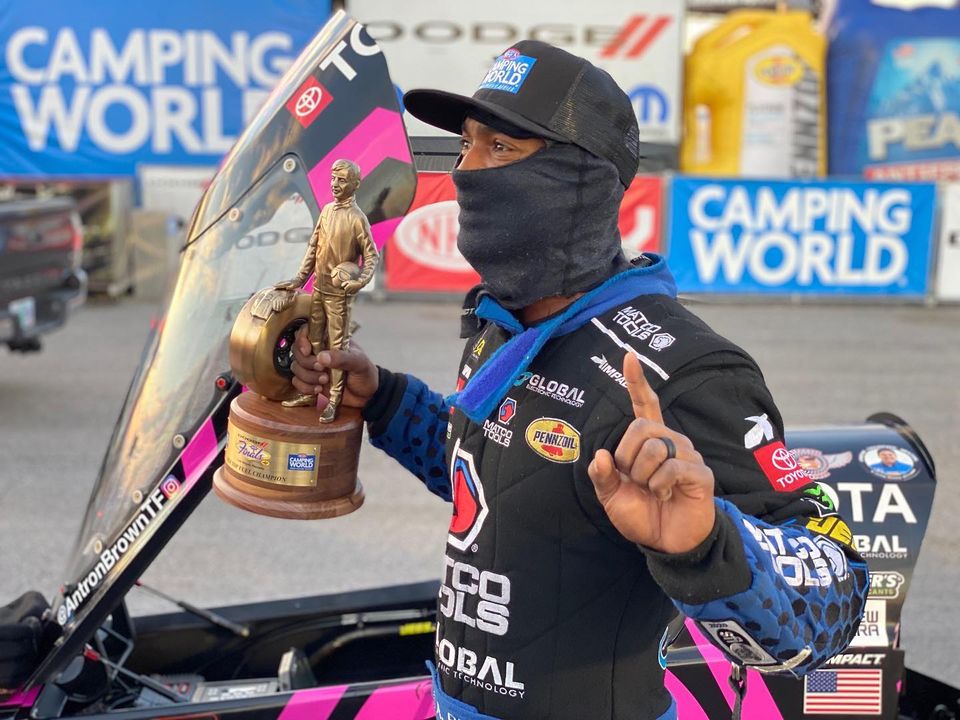 Antron Brown, who hadn’t won since the August 2018 race at Seattle (which also ended a sizeable winless streak), turned out to be one of the few Top Fuel racers who could tame newly crowned champion Steve Torrence.

With that, Brown ended a 42-race drought to give his Don Schumacher Racing organization back-to-back Top Fuel victories and a back-to-back double-nitro finish, its 67th overall.

The three-time series champion called this 51st Top Fuel triumph “medicine for when things aren’t going your way.” Although he said his team had “been down for so long and kicked all over the place,” he said he believed it was “just a matter of time” before he would be back in his groove.

He said he never let his thoughts wander to the place where he would think he might have won his last Top Fuel race when he registered No. 50.

“I never thought like that,” he said. The thing about it is time. And we got the whole gang back together: [crew chiefs] Brian Corradi, Mark Oswald, Brad Mason, all these Matco Tools / Global Technology boys. It just a matter of time. We just took it one step at a time. We stayed poised on a mission.

He put the abbreviated season in perspective.

Brown said, “Right now, we wouldn’t even be halfway through the year on the runs that we made. So this crew is coming on, and we're getting it figured out. We started with a whole different combination, and everybody said, ‘Why don’t you run this one?’ and I said, ‘No, we’re going to run this one.’  I never lost faith in any of these boys, and Lord knows that we kept our head down, cut out all the static. We stayed true to the game. The only way you can be persistent is with persistence.

“That just shows you what this team is made of. Next year, we're looking forward to 2021. We still got work to do. We're not where we want to be, but we're prepared where we can win rounds. We had low E.T. two of our four rounds today. That’s just showing that we're getting back to where we need to be.”

Brown was not in contention for what would be his fourth championship, although he closed the year with a top-five finish at No. 5. But he said winning the last race of the year gives him a sense of momentum.

“It’s medicine for when things aren’t going your way, and we've been so close and we ran some really good races in the wrong spot at the wrong time. Sometimes you got a little luck on your side, and it really benefits us if we can stay poised,” he said.

“It really started about three races ago where we came in saying, ‘We've got to do what we got to do. We're not worrying. We’re not trying. We're going to do what we can do.’  It paid dividends this weekend,” Brown said, “and that's where the mindset is at going into next year: keep our heads down, work harder and smarter, regroup, and come out. And we're going to be that much father ahead next year, because we’re going to pick up where we left off at this year.”

He said, “The main thing of it is, is that we have all the parts and pieces here at DSR, all the R & D for backing. We have all the engineering, but the thing about it is that we’ve been down for so long and kicked all over the place, it's really a good positive motivator for the boys, the guys on the team. The work you’ve been doing will pay off, and it has paid off. Now we got to keep on going and giving that energy. We are doing something for a purpose.”