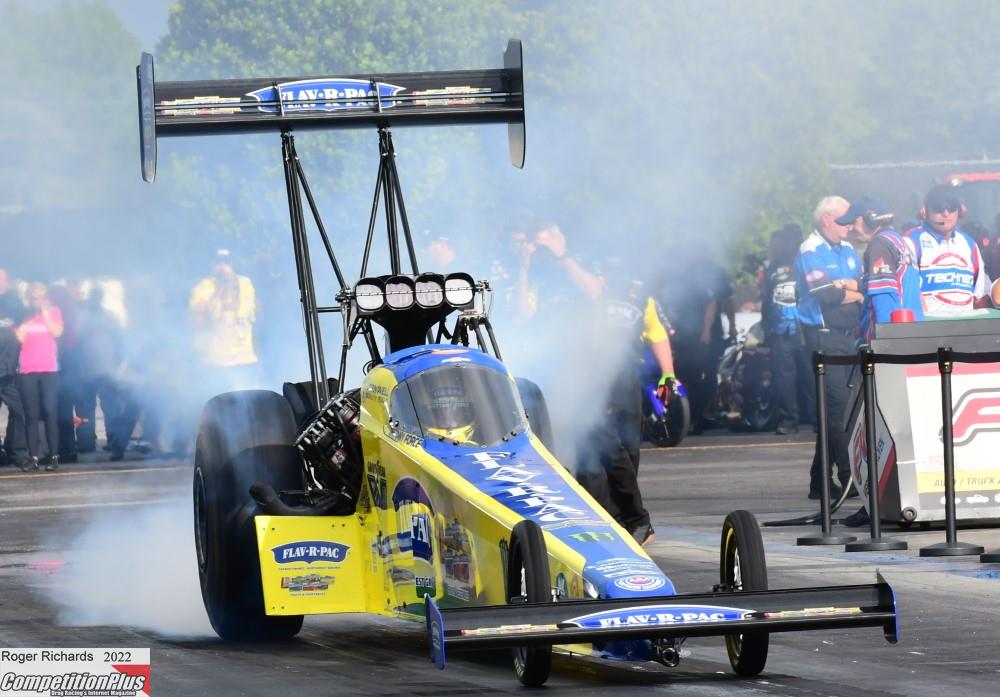 When it comes to record-breaking performances, there is little Brittany Force hasn’t accomplished in her illustrious career.

Topping the field at a nearly 17% clip in the Top Fuel category, Force added another notch to her already impressive belt Friday with the eighth fastest pass in NHRA history, resetting both ends of the track record at Virginia Motorsports Park and giving her the provisional pole at the Virginia NHRA Nationals.

With that pass, Force now has nine of the 10 fastest runs of all-time.

“We are pretty excited to do that here in Virginia. It has been since 2019 that we were here last and to be able to come out and put on a show for the fans that stuck out the rain was exciting,” Force said. “We just want to keep on improving, keep on stepping it up and see what we can do on race day.”

Force piloted her Flav-R-Pac dragster to an impressive 3.710-second pass at 335.82 mph, equalling the speed set by Funny Car competitor and provisional No. 1 qualifier in that class Matt Hagan earlier in the day.

That chart-topping lap came after a nearly four-hour delay following persistent showers in the area. While much of the afternoon the drivers and teams were left wondering if they were even going to see the track, Force was thrilled to be able to have that kind of performance on a green race track right off the trailer.

“We were excited just to get a run in. We weren’t sure with how the weather looked today if we were even going to get a shot at it. But it cleared up, (David) Grubnic had a goal set and we hit that mark,” Force said. “It was a good, solid run. You can usually tell when it is on a run like that. It is that continual pull once you get out there and it really just keeps on pulling you to the finish line.

“That was right where our goal was. (Grubnic) sets a low e.t. and a high e.t. and we are always in that area, typically on the lower end of it. So we definitely hit our mark and went beyond it. I am excited to see what we can do this weekend.”

Justin Ashley slotted in just behind Force in second with a 3.725 at 327.82 mph as one of 12 drivers in the Top Fuel category to record a three-second run. In Funny Car, only two cars made it into that same range.

After the run, Force revealed that she was actually in a different car than the one that took her to two victories and the Top Fuel points lead through six races this season, but was excited to be able to see that kind of performance out of a machine that hasn’t seen much action over the past few years. The car last ran regularly in 2018 and some in 2021.

“Trying to figure out a new car in Q1 is challenging for the whole team and definitely me as a driver trying to feel it out during the burnout and see how it steers and backing it up. It all just feels a little off,” Force said. “To be able to pull that car out and run like that we are excited.”

If her time holds on Saturday, it will be the 34th top qualifier award of her career and the second this season. Of course, with more rain forecasted for Saturday, Force knows that anything can happen as the team prepares for race day. Still, a solid start to the weekend and several great performances so far this season has the team riding high.

“Coming into Virginia as the points leader, you have that confidence boost, especially after two wins,” Force said. “We are feeling good. Looking at the forecast, it is a little bit iffy all weekend and to be able to come out and make a solid run, a clean run, we feel good going into race day no matter how it turns out, no matter how many more runs we get.”