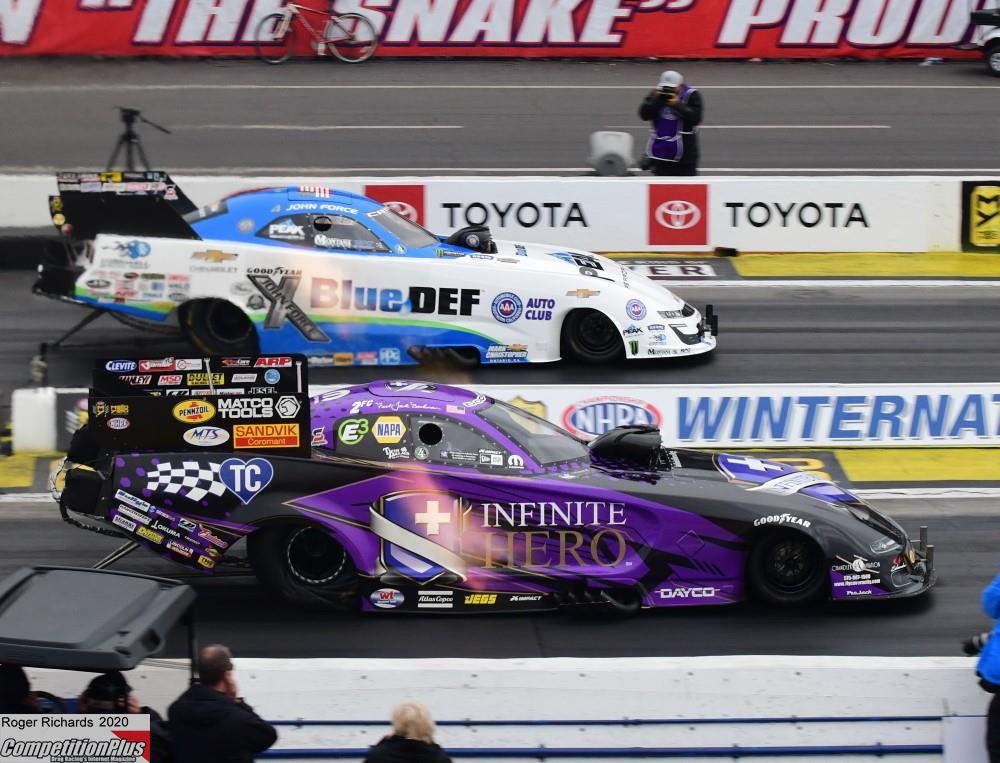 Just three months ago, Jack Beckman entered the season finale at Auto Club Raceway at Pomona on a lifetime losing streak in nitro at one of the sports crown jewel motorsports facilities.

Beckman knocked off John Force in his third-straight final at the legendary southern California facility, overcoming a small starting line disadvantage to cruise to his 31st career Funny Car win and first at the Lucas Oil NHRA Winternationals presented by ProtectTheHarvest.com. 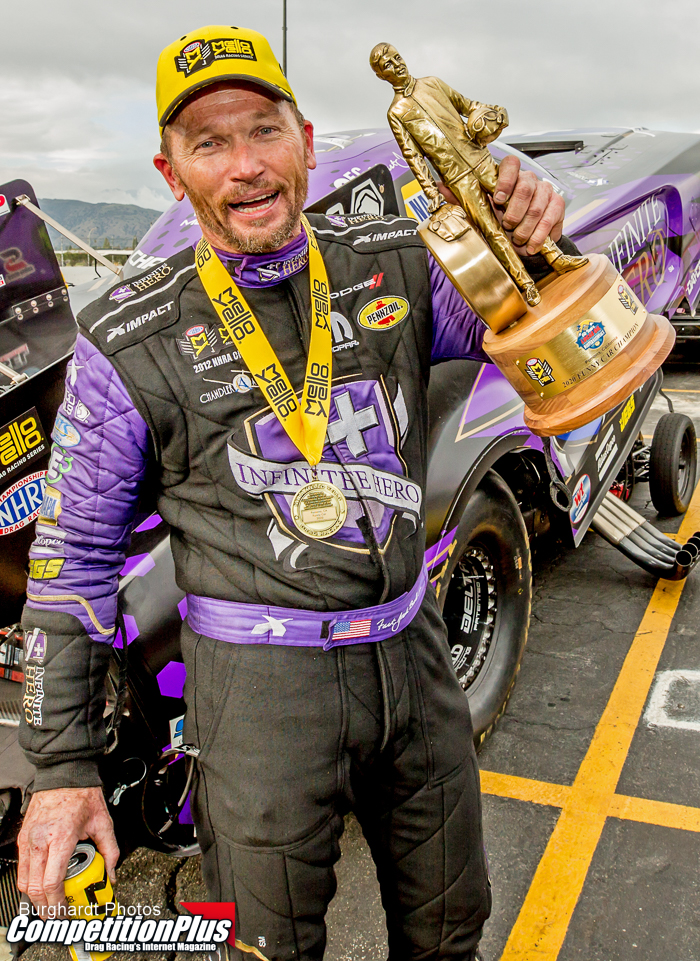 “When you look at your trophy case, they are all the same size. But when you look at that 2015 Indy one, it shines a little brighter because of what happened that weekend. We’ve got the last Funny Car trophy from Englishtown. Certain ones just stand out,” Beckman said. “But to get a Winternationals trophy in nitro, my first two trophies were at the Winternationals in Super Comp. Now I have two in three months.

“It is my home track. I have probably spent more time down on that starting line than anybody else. I feel comfortable here. I have a lot of friends and family out here today and it is the perfect storm. I had never won a nitro title at Pomona up until November of last year and now I’ve got two in a row. It is beyond magical. I’ve said it before, you don’t know if your last win is your last win. I am going to go out on a limb and say this ain’t our last win.”

Nerves were high in the final as a small drizzle put the competition on hold, leaving the drivers to sit and wait in the staging lanes. But after a small delay, Beckman pulled to the line and got the job done.

Beckman produced a 3.837-second pass at 333.33 mph in his Infinite Hero Dodge Charger Funny Car for Don Schumacher Racing, nosing just ahead of Force’s 3.897 at 332.34 mph. The win stopped Force short of earning his eighth Winternationals title as the 16-time champion reached his 11th final round at the NHRA season opener, but first since 2014.

“To beat John Force in the final, that makes for a pretty cool weekend. That Infinite Hero team is just on mean and our car has been amazing,” Beckman said. “There are so many tough people in Funny Car right now. The DSR cars are tough. Robert Hight has always been right there. J.R. Todd, there are a lot of tough cars out there. But there is nothing like beating John Force in the final round. I say that with the ultimate level of respect for that man.

“It is like striking out Babe Ruth. He is the man. He is the standard. But it is pretty cool once in a while to remind him that he is not the only one who can run good.”

Battling a cold throughout much of the weekend, Beckman admitted that he wasn’t entirely sure who won in that final round. Ready to return to his hauler and rest following a grueling afternoon, Beckman immediately perked up upon finding out that he had, in fact, won the race moments later

“I go down there, pull the parachutes, tug on the brake and I saw my win light come on. But nobody is on the radio saying ‘hey we got it done.’” Beckman said. “(Force’s) car shoots out in front of mine, but I am usually real quick on the chute, so ours slows down quick, but that doubt starts creeping up. Was that a win light? Maybe I didn’t see it. So I got on the radio three times, ‘did we win?’ Nothing.

“So they are pushing me off the track and I am preparing myself just in case I saw something that wasn’t there and we didn’t win. I felt like crap, but when they pushed me into the winner’s area, I suddenly felt much better.”

Beckman credits a lot of his success on Sunday to the strong finish the team enjoyed at the end of 2019, along with an offseason eye surgery that made a big difference in his reaction times.

“The reaction times for me have been better all weekend long and I attribute that to just getting my vision checked out,” Beckman said. “I had eye surgery a year-and-a-half ago to get rid of all of the floaters and they literally drained all of the fluid out and my eyesight took a dive after that. I am sensitive about my eyes. I don’t want to do anything that I don’t have to, but it was getting to the point that it was affecting my driving and, let me tell you, a hundredth on the starting line is almost five feet at the finish line. If you can help those guys out on the runs where our car isn’t the quickest and they can help me out the rest of the time, we are going to be tough to get around.

Qualifying second behind the strength of crew chiefs Dean Antonelli and John Medlen, the 2012 world champion eliminated Steven Densham, Ron Capps and Alexis DeJoria on his way to his 64th career nitro final. And each pass produced their own miniature drama.

In round one, Beckman had a small fire at the top end following an eventful pass, but lucked into the second round when Densham’s tires let loose at the hit. “The car goes out there and shakes, but that is the benefit of qualifying second,” Beckman pointed out. “I didn’t know where Steven was. I didn’t see him, but I am not about to turn and look over my shoulder so I pedal the car and it recovers. So Guido says later, ‘did you hear me say shut off?’ If I did I would have, trust me. So it pushed a head gasket out and we had a small fire. It turned out it really wasn’t that big a deal. We didn’t put any oil on the track, it wasn’t that much damage. When you have a great team, even on the short turnarounds, you get that stuff done.”

In round two Beckman saw his DSR teammate go up in flames as Capps lost a cylinder and had a major explosion after the 330-foot lights. In the semifinals, Beckman finally saw it all come together with a strong 3.843 at 332.92 to eliminate DeJoria and end her comeback bid after taking time off from the sport.

With his win on Sunday, Beckman became the 30th different Funny Car winner in Winternationals history and moved into a tie with Del Worsham for eighth overall in the class in wins with 31.

“We were top two every run in qualifying and, except for the first round, we were low ET or second low every single round,” Beckman said. “Our car was just absolutely amazing. And as a driver you don’t want to limp your way into the winner’s circle, you want to be dominant and it was awesome for us.”

Following a tremendous finish to 2019 that saw Beckman finish second in the championship with two wins in the Countdown, a strong test session in Las Vegas one week ago only adds to the confidence that this year carries into the rest of 2020.

“Frankly I fumbled it last year. If I hadn’t screwed up a couple of times in the Countdown, there is a likelihood we would have been world champs. That’s not taking anything away from Robert Hight, but that is some baggage I will carry with me,” Beckman said. “But we tested well and feel really confident right now. There are a lot of teams that go (to testing) and practice. What they do is they go burn parts and try to run quick.

“We tried five different clutch discs, a different set of exhaust valves, spare injectors, spare supercharger, spark intake manifold, we tried new wheels on the back of it, tried running sticker tires. We treated it like, let's cross all these off the list and see what works for us.

“We didn’t use much of it here, but that is the stuff that, down the road this year, is going to make us a championship contender.”