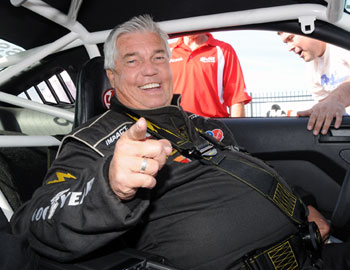 The nurses at a North Carolina hospital probably got worried when they tracked the vital signs of one of their patients and heard an uproar from his room.

It really wasn’t anything to be overly concerned about, it was simply drag racing Hall of Famer Roy Hill watching his car speeding to victory near St. Louis on Saturday night. A win was virtually the best medicine Hill could have received, seeing how he had been hospitalized last week. Injuries he suffered while standing behind the burnout box at NHRA’s Charlotte race a month ago required further medical attention.

Hill’s 2020 Ford Mustang, driven by Mike Bell, took top honors in the Extreme Pro Stock ranks at the ADRL’s Gateway Drags in Madison, Ill. Bell scorched the eighth-mile at Worldwide Technology Raceway in 4.138 seconds, 172.59, to win the event over Scott Benham of Conroe, Texas, who trailed at 4.236, 171.75. The cherry on top came as the Hill/Bell team received the Best Appearing Crew award.

Hill announced in June 2019 that he intended to field mountain-motor Pro Stock cars for Bell and Vincent Nobile during the 2020 season. The funding didn’t come together to make that happen, and then the COVID-19 pandemic shut drag racing down for three months.

Finally, nearly two years to the date of Hill’s announcement in Bristol, Tenn., his car was on the track across the Mississippi River from St. Louis.

"We knew if we could get some runs in the car we could go back to winning, and this just proves how good a team we have,” Hill said by phone Sunday.

"And it's not one person. Me and Mike Bell talked back and forth on the phone (and) two guys that's working for us. They'll do anything Mike asked them to do, and Mike's a person that wants to do it all himself. But you can't do that. It takes a team."

Bell, of course, isn’t a newcomer to mountain-motor action. In 1995, he won the IHRA Pro Stock title driving a Thunderbird for Hill. Bell has worked with the Roy Hill Drag Racing School for 32 years, and he’s built his own cars from the ground up. He was a 2018 inductee into the North Carolina Drag Racing Hall of Fame.

Over the weekend, Bell qualified No. 3 in an eight-car field at 4.150 seconds, barely trailing John Deflorian Jr.’s 4.11 and Brad Waddle’s 4.12. After taking out Dwayne Rice in the opening round of eliminations, Bell used a .033-second reaction-time advantage to better Doug Kirk on a holeshot, 4.17 to 4.15. He then covered Benahm by a full tenth of a second in winning the event.

Hill’s injury at zMAX Dragway on May 14 has forced Bell to step up even more in making sure the bossman’s plans are implemented and that business continues as close to normal as possible.

"I cannot do schools. I cannot go to the races. He had to take over,” Hill said of Bell. “And we got four, five good people, and they'll continue the schools and Kim's good in the office.

“Only problem is I'm the only person that knows how to raise money. But with winning this race, at least we got something to say that we have done and want to go further forward."

Hill was the victim of a freak accident in the zMAX Dragway staging lanes when a Super Comp driver, who has not been publicly identified, backed over him. The driver later called Hill to apologize. Hill said he holds no ill will toward the driver.

“When that car backed up and I didn't see it and it knocked me down, if you look at the video, you'll see my head go down and hit, bounce up, and go down again,” Hill said. “Then you see the tire coming up on top of my stomach and it's sunk down about four to six inches. And my guts come out around the edge of the tire and they are trying to get (the car) off me.

"Then the driver panicked, put it in gear, and hit the throttle. That's when it ripped my pants off from the waist down to my knees. And that's when it spun my leg around."

Hill said that despite the pain of his injury, he gave one of his other drivers his radio and headset and “told him to tell Mike to continue” the plans already in motion.

Hill was transported to a local hospital, where he underwent surgery.

"There's just so many people called. I'm very fortunate, and I got some friends I never believed I'd hear from so long ago,” Hill said. “There's so many prayers out there for me.”

While there’s no timeline for a return to the track, it’s certain it won’t be anytime soon based on the severity of his injuries.

"I got to overcome this, and if you give me an inch, I'll take another inch. And so that's where we're at, just trying to get well,” he said. “I broke a hip. They put a rod in it. And then my femur is broke. …  Just a hell of a mess."

That said, he’s confident his return is a matter of ‘when,’ not ‘if.’

"I won't go back ’til I can physically walk and take care of myself."

More wins certainly wouldn’t hurt his recovery process. And now there’s concrete proof that the performance they anticipated two years ago is a reality.