ABILITY TO ADJUST IS BECKMAN'S KEY TO WINNING 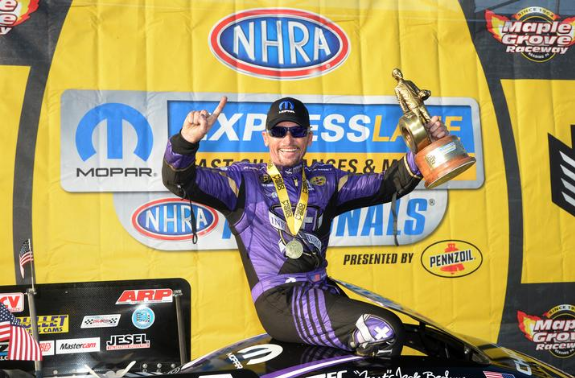 Jack Beckman is very much still in the 2019 NHRA Funny Car championship battle despite an early exit last weekend in St. Louis. He came into the second race of the six-event Countdown to the Championship, leading the point standings and with a lot of momentum on his side.

“We missed the beat here this weekend,” Beckman said, following the loss to defending series champion J.R. Todd. “We made it down the track two of four qualifying sessions, and our car the last two races had been absolutely stellar. I don’t think by any means we were lost. I was very confident heading into race day. The bottom line is this one goes down as a holeshot loss, and that was on me. Had my right foot been three-thousandths of a second quicker, we wouldn’t be talking about this; we’d be heading into the next round and racking up points. I feel like I let the team down.”

And with that admission, Beckman accepted the fact his championship pursuit will take on a different approach. For Beckman, one thing he’s learned in chasing a championship is that none of his bids to win a championship will ever be the same.

When he won the 2012 NHRA Funny Car championship, he didn’t lead the point standings until the third race of the Countdown, and never relinquished the top spot in beating Ron Capps by two points.

“I don’t think the goal is to hold onto the points lead,” Beckman explained. “I think our goal is to widen the points lead, right? It’s not like you go out there, and you win the first four races of the Countdown and say all we have to do is qualify at the last two races, and we win. We want to win everything.

“I do think that the crew chiefs race differently in the Countdown era. It’s afforded you the opportunity a little bit like major league baseball, to try a whole lot of things during the regular season so long as you still make the playoffs. Even though there’s a trophy for every race, which is very different than major league baseball, you still realize the big picture is the championship.”

One thing which never changes once you get into the Countdown is your approach.

“There is no more testing. And the irony is we have tested less this year than I have in my entire nitro career. We skipped pre-season testing, we didn’t do the pre Indy testing, and that came down from Don and said you guys can have 12 runs per year of testing. That’s to save money and I think it’s a brilliant move because I think it’s forced us to be much more efficient with the test runs that we make, and I think it’s forced us to be more critical of ourselves getting in the show firmly Friday and then trying stuff out on Saturday.”

As Beckman sees it, a team can never glean too much data.

“Provided that you know what the data means,” Beckman added. “The problem with these cars, the track conditions change. You know, the quickest you could drag one of these cars up for back to back runs is probably about 55 minutes. And that would be a real quick service and getting it back up there. And even in that hour, the track changes.

“So we don’t have access to so much data that we eliminate the variables out there. At the end of the day, for every run, it’s really still an educated guess on the crew chief’s part. Todd Okuhara used to always say, ‘I don’t mind testing, I hate practicing.” 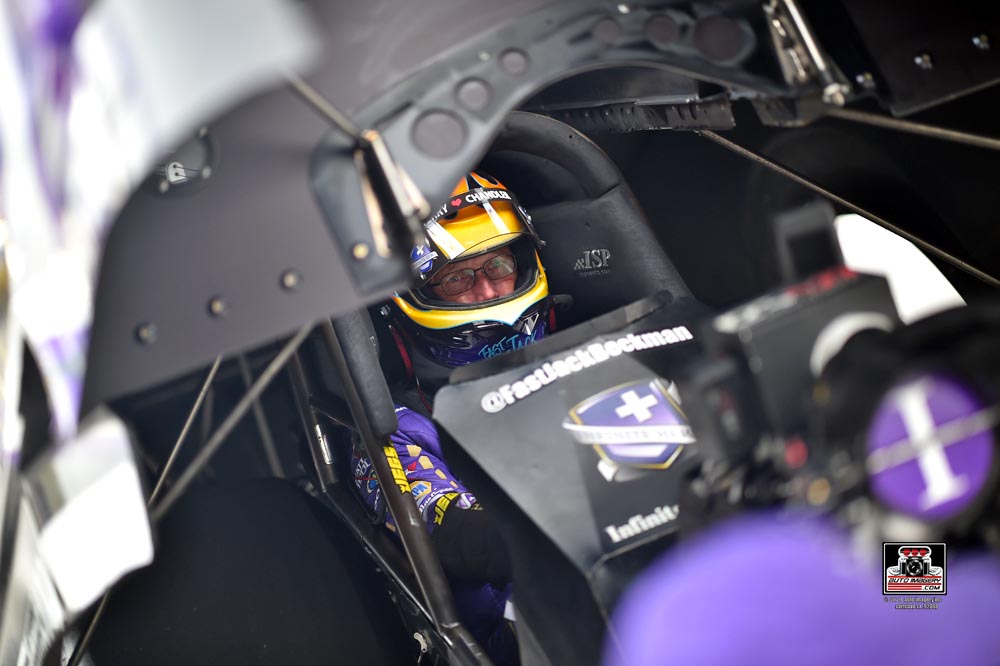 With a smaller testing regiment, Beckman and the team have had to use their efforts wisely to get a grip on a lot of which has changed over the last couple of years.

“We slipped for a while trying to get our clutch disk inventory where it needed to be to finish the season,” Beckman explained. “We also got thrown for a loop with the track prep. We just didn’t have an answer for it for quite some time. And I think persistence with patience pays off. And I think that John [Medlen] and Guido [Antonelli] really studied the data, really spent some extra time getting reacclimated with what they’re doing with the reduced preparation out there.

“The proof is you watched us start clawing our way back up through the points standings and made it back into fourth place, and had we won that final round at Indy, I think we would have gone into the Countdown in third place.”

The 2012 championship was one of resilience when, during the course of the season, team owner Don Schumacher made the decision to switch out Beckman’s crew with Ron Capps’ team, including crew chief Rahn Tobler. By the end of the switch, the only person left was Beckman. He had to adjust to a new crew led by Todd Smith and Terry Snyder.

Beckman reacted to the move by viewing the decision through a team owner’s eyes.

“It was unsettling and upsetting to lose the team and the combo during the season,” Beckman admitted. “But always recognize, driving for Don Schumacher A, it’s his decision, not mine, B, he’s always trying to make the decision that benefits the most people most of the time. Though I wasn’t the one that the change was focused on, it was focused on the NAPA team, it’s because that was a fully-funded team.

“Mine was funded for ten races, so he needed to protect that in essence to protect Don Schumacher Racing, and the proof’s in the pudding because here seven years later, I still am employed there. So I think I was able to look at that with the right perspective, that it wasn’t my choice to make, and my job is to do the best I can with what I’ve got.”

“My job is not to screw up the crew and the crew chief’s job,” Beckman explained. “I am not the team manager out there, I am not living in Brownsburg and seeing the guys five days a week. You know, all this responsibility has to get shouldered by Guido and Medlen. I literally fly in. Now I do try to have a great relationship with the team. I will stay there at the track until the car’s loaded each night, I will do my best to let them know that I’m interested in their well being, and I like to have a relationship with each of the crew members out there because I think it makes it better.

“Everybody’s going to make a mistake out there, whether it’s a crew guy, crew chief, or the driver. And man, as a driver, if you’re arrogant and in and out of there and staying at the pits the minimum amount of time, I wouldn’t want to be that guy getting talked about behind their back when you screw up because the crew doesn’t like you. I think that it just makes everything flow better, especially for representing Infinite Hero that we’re all cohesive, that we all see things through even though we have different personalities. I think we all see things through a very similar view point out there.”

Beckman believes the greatest asset for his team with four races left to go, is what it has been for the last four seasons - continuity.

“I’ve got a lot of continuity. Infinite Hero’s been on the car since 2015, so that’s five years of me wearing one style fire suit, except for the one-off races we do for MD Anderson, and that’s kind of nice. It’s nice not having to change fire suits six times a year for different sponsors.”

“This one, we’ve got a core mission, and that’s to raise funding and awareness to help out injured veterans. So I feel like even if we have a bad day at the track, we’re still having a great day because we’re helping the veterans out. So, no I don’t think that there’s any similarities other than you need to have a cohesive unit of 10 people with a good work ethic, and the ability to put the bad days behind you and recognize if you keep working smart and hard, you’re going to have good days in front of you.”