RACER SHOWS HIS ASS IN ROCKINGHAM 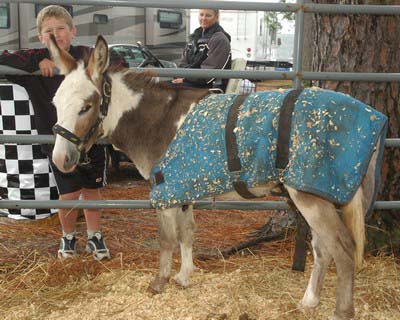 Super Rod racer Greg Slack made good on his promise to show his ass – his jackass that is.

Slack has the young burro as a pet and decided to bring it to the race track. The animal was penned up in the pits and spent much of the day munching on straw.

How did he transport the animal to the track?

“My wife,” Slack said. “She brought my ass to the track.”

In the interest of fair reporting, Slack did contact track owner Steve Earwood before bringing the animal to the track. Earwood granted permission citing that a donkey at a drag race is no different than any of the large dogs he's seen.

The Slacks were spotted walking the critter around the pits on a leash over the course of the weekend. The only thing that proved more odd was Scotty Cannon's squirrell in a cage.