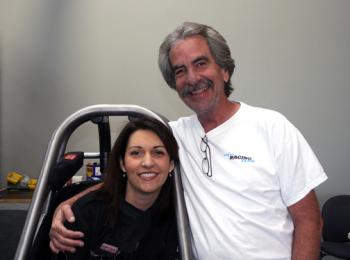 Gary Messenger, owner of the “Future Flash” Nostalgia Nitro Funny Car, announced today that popular nitro dragster driver Mendy Fry has joined his team to compete in 2008 NHRA Hot Rod Heritage Series Events.
Throughout her driving career Fry has handled racecars ranging from Quarter Midgets to Top Alcohol dragsters to modern front-motored Top Fuel Dragsters and said of the opportunity, “Gary has a first class operation and I feel it is time for me move into the nitro funny car arena, a drag racing class that is growing faster than anyone anticipated just a few years ago.” In the off-season Messenger added nitro veteran Donnie Couch as a tuning consultant, to which Mendy commented, “This is also a chance to work with Donnie, a tuner I’ve always wanted to race for.”
Messenger, a resident of Pomona, CA who started racing dragsters in the 1950’s added, “Mendy is a great driver who I’ve been watching since the early 90’s. I’m just really happy it worked out that Mendy is driving my car, but be careful on the starting line, because she’ll cut a light on you!”
NHRA driver Ron Capps was in the seat for the car’s competition debut at the 2007 California Hot Rod Reunion, where the team made it into the quick eight-car field and took home the Jeg’s High Performance “Best Appearing Car” honors.
The “Future Flash” Nitro Funny Car Team gets sponsor support from MFM Building Products, Rapid Set Concrete Products, BAE, Glendora Dodge and the Pomona Condors, Inc. The team has a good baseline from the recent NHRA Winternationals in
Pomona where their nitro funny car made a weekend exhibition run against the famed “Pisano & Matsubara” Vega carding a solid 6.295 elapsed time at 224.43 miles per hour before a huge Pomona Fairplex crowd.
Messenger’s Nitro Funny Car is historic on its own, sporting a 1972 Dodge Charger body (originally campaigned by “Snowman” Gene Snow) mounted on a 90’s Murf McKinney Chassis that was one of Roland Leong’s “Hawaiian Vacation” funny cars. Final licensing for Fry will be completed over the coming weekend as the team prepares for the 50th March Meet at Auto Club Famoso Raceway in Bakersfield, CA, competing against some thirty nitro funny cars on March 7 – 9, 2008.
Categories:
:::::: News ::::::