ENCORE: THE WILD BUNCH – BORN TO BE WILD The mere notion of anchoring supercharged, alcohol burning engines within the confines of a full-bodied doorslammer was a practice described as volatile, but that didn’t stop a dedicated group of thrill-seekers from pursuing the rush. Their self-appointed name, the Wild Bunch, was an accurate description of the image they conveyed. How else could you explain a group that would dare bolt a blown, alcohol burning motor into a Chevy Luv Truck, a Nissan 300 ZX or if those weren’t radical enough, a Jeep CJ-5? We had two goals when we went to Atco. We wanted to get the first six second run and we also wanted to piss the nitrous guys off. I’d say we succeeded on both counts.” – Camp Stanley, former Wild Bunch member and crew chief for Tommy Howes

What started out as a group of guys choosing to be different in bracket racing, quickly evolved into a lucrative match race circuit and the inspiration for the Top Doorslammer class in Australia. Their finest hour resulted in the first six-second doorslammer pass in drag racing history.

Their unpredictable nature made them an immediate hit for the fans in the Mid-Atlantic region of the United States as well as the rest of the country. Not only that, their antics also brought forth heaping amounts of publicity within the various drag racing magazines.

Those days are now a distant memory for many, but for Dave Wallace the recollections are very vivid.

“They reminded me of the old days of the Funny Cars and the Gas Supercharged,” explained Wallace, former editor of Petersen’s Drag Racing Magazine. “I’ve always like blown doorslammers and they provided an interesting evolution. The early cars such as the ‘Wild Bunch’ were real cars with stock wheelbases and such. They were crude, overpowered and unpredictable. There was none like Camp Stanley’s blown Chevy Luv truck.

“Anybody who got in the show had a chance to win because the cars were so unpredictable. As more cars came into the fold, the incentive to be the first to run in the sixes led to more advanced race cars. The Wild Bunch was the closest on the East Coast to the Bob Bunker and Dave Riolo cars that we had on the West Coast. There really wasn’t a class for this kind of car. Anytime a class or a circuit like the Wild Bunch comes out of popular demand from the fans is really something to take note of. There was no real television package, so the only real exposure that these guys got was in the magazines. As magazine guys, we were always looking for the angles like they provided.

“It was like every track has a set of fast heroes,” Wallace continued. “Those guys organized their fast heroes. There was no place for them to run. They were bracket racers. That’s a cool thing. Pro Modified came from bracket racing and so did the Wild Bunch. That’s directly where it came from. These were fast bracket cars that got so fast that they started match racing.”

How ironic that we should mention the term match racing, considering a scheduling snafu that led to the creation of the group. Let’s rewind the hands of time back to the late-Seventies at Maryland International Raceway.

During that era, the track was under the guidance of Tod Mack, an individual once known for being the first American auto racing promoter to offer at-track Para mutual betting at Maryland International Raceway during the mid-Seventies.

Mack had managed to get himself in a bind on a Saturday evening show after booking and advertising a jet car show, only to have one of the teams cancel at the 11th hour. Knowing he needed a reasonable replacement, Mack took a stroll through the Super Pro staging lanes hoping to find a suitable replacement to match race the legendary Roger Gustin’s Monza Jet-powered Funny Car. At this point in the game, Mack’s goal was to find someone to save the show. He had several thousand D.C.-area fans that he had to account to that night.

The only car that caught his eyes belonged to a former NHRA class racer and record holder named Tommy “The Who” Howes. Howes piloted an early-model Camaro with a 6-71 GMC supercharger protruding through the hood. Always the businessman, he was game to the idea if the price was right. Since neither Howes nor Mack had a clue as to what a fair price was, the question was asked as to how much money Super Pro was paying. Mack answered $300, so Howes agreed to run against the jet for that price.

Mack’s gamble proved to be more than he bargained. Howes’ two-second handicap was nowhere near enough of a head-start to fend off Gustin’s mega-horsepower creation, but the improvisation made for quite a show and the crowd loved it.

Not long after that, Mack was booking Howes to do match races at MIR and his other track in Colonial Beach against various other supercharged entries. As the word spread about this group, now titled “The Wild Bunch”, they expanded in size and booking range. By 1984, they had nearly 24 dates ranging from Canada to Georgia. Howes, along with second-year Bunch member Camp Stanley, had developed a reputation as having some of the baddest doorslammers in the country.

“I wasn’t in on the original first group,” explained Stanley. “We were in the middle of a Jimmy Carter type recession, almost a depression. Tommy Howes, Nelson Grimes and I were bracket racing big block, alcohol doorslammers. I couldn’t race on the scale that I wanted to, so I turned my race car into a street vehicle. In 1980 and 1981, I had that car on the street.

“The bottom line to the whole deal, to steal a line from Aussies, was to put butts in the seats,” continued Stanley. “Elmer’s (Wachter) Jeep and my Luv Truck were examples of what we thought it took to grab attention and to lure in sponsors. Anybody could have had a Camaro.”

One might wonder which was the more volatile, the cars or the drivers. Wallace pointed out that the Wild Bunch brought out the best in a driver.

“I think they were pretty darn talented,” explained Wallace. “The cars by their very nature were pretty volatile. They all started out as real cars. As they evolved into tube-framed cars, they were pretty crude. For the wheelbase, which was stock, and as high as they sat, they did wheel stands and crashed and were very exciting. The drivers were capable. There weren’t any cars like that around with that high of horsepower with doors on them.”

The Wild Bunch offered track promoters a bargain during an era when the superstar fuel cars commanded nearly a $10,000 price tag and that netted maybe two runs. For the small-to-medium tracks, the “Wild Bunch” offered the bargain of the Century for nearly $4000 (depending on location) for the whole group.

Howes had long since traded in his Camaro for a Datsun Z-car. Others joined the group including former IHRA Funny Car champion Scott Weney, behind the wheel of a AA/Altered roadster. In fact, when the comment was made that there wasn’t a single Ford in the Wild Bunch; Stanley took the matter into his own hands. His creation fit the persona perfectly, a blown Taurus Wagon.

“The Wagon actually goes back to Jim McGraw when he was with Super Stock and Drag Illustrated,” said Stanley. “He asked the question as to why there weren’t any Fords in the Wild Bunch. That conversation took place in Bob Rizzolo’s RCD Performance, the one that built my cars as well as Tommy Howes’ cars. Someone came up with the idea of a Taurus wagon. McGraw got in touch with Ford Motorsports and they sold me the body in white. 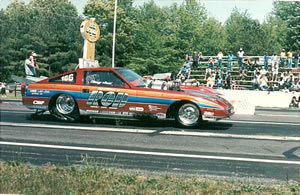 The original member of the Wild Bunch was Tommy Howes, who eventually drove this 300 ZX to the first-ever six-second run in doorslammer history.

“Then it was suggested that if it was a Ford then it should have Ford power. Billy Meyer had been experimenting with a shotgun Ford and there was a point in time that Dale Armstrong had been his crew chief. They felt there was some potential in a blown shotgun Ford with nitro. They sidelined the project and someone told me that he had it for sale. I called him up and struck a deal and then took my duallie to Indy and loaded it all up.”

Shortly after that, the Wild Bunch appeal went international, and what better of a place for it to land than Australia? A visitor from Aussie land witnessed the group run and knew that potential was there for the group in his native homeland.

“Dennis Syrmis, one of the owners and operators of Willowbank Raceway in Brisbane took the idea down there,” said Stanley. “He was at 75-80 Dragway in Maryland when Tommy and I were bracket racing these cars. He loved the idea. The Wild Bunch idea formulated quite a bit and they drafted a plan for blown doorslammers, except they drafted theirs with a dial-in. There was a point in time when Peter Kapiris, an Aussie Top Doorslammer legend, ran as part of this show.”

Wallace remembers the concept took off in Australia, and the visit by Howes and Stanley in 1989 only fueled the fire.

“Australia only had one really fast doorslammer at the time and it was a Thunderbird called the Warlord, right-hand drive car,” recalled Wallace. “They all ran brackets, so when Stanley and Howes went down there in 1989, Ray Ward’s Warlord was the only one that could run with them. It was sort of a showdown. The interest led to the creation of the Top Doorslammer class.”

The Wild Bunch did to the Top Doorslammer class what the touring Funny Cars and Dragsters used to do the Aussie fuel classes. This experience created an avenue for advancement and new technology.

“They used to bring Funny cars down there and that sped up the development of those cars down there,” Wallace said. “The same thing happened after the Wild Bunch went down there. Tommy Howes and Camp Stanley really influenced the international scene. You could actively say that it also influenced Pro Modified.” Camp Stanley had a penchant for the odd as he came out with an odd supercharged Taurus wagon.

Probably the one crowning achievement to the Wild Bunch existence came in July of 1988 when Howes took his revolutionary 300 ZX to the IHRA Nationals in Atco, New Jersey. He then achieved what every carbureted and nitrous doorslammer team considered the final Holy Grail behind the 200 mile per hour banner of that era – a six-second doorslammer run.

Since the Wild Bunch was not open to non-supercharged cars (i.e. nitrous or injected), Stanley’s comments were fitting of their thumbing-of-the-nose attitude toward the trend of ignoring the supercharged combination in Top Sportsman.

“We had two goals when we went to Atco,” explained Stanley, who served as Howes' crew chief at the event. “We wanted to get the first six second run and we also wanted to piss the nitrous guys off. I’d say we succeeded on both counts.”

In a mid-Eighties issue of the now defunct Petersen’s Drag Racing magazine, Wallace made a statement that can only serve as prophetic in today’s doorslammer racing world.

The veteran journalist penned, “If I was a gambling man, I’d probably think about all of those superchargers lately sprouting up through the hoods of the doorslammer drag cars across the country. I’d bet on even bigger things ahead. And, I’d blame the whole darn thing on Tod Mack.”

You could blame today’s supercharged dominance of Pro Modified class on “The Bunch,” they were just too wild for their own good.