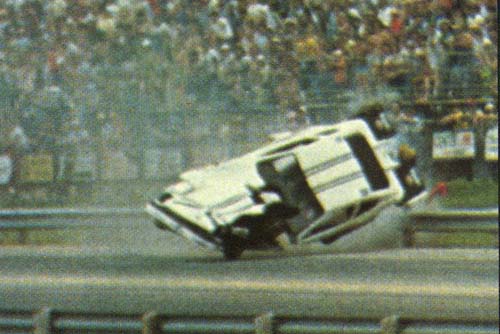 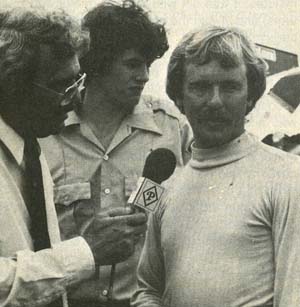 Tim Grose, a former nitro Funny Car driver, has been an interested spectator to the recent controversy of the Funny Car chassis and subsequent crashes, but points out that while his was bad for that era in drag racing, he’s seen a lot worse today.

“I was fortunate to walk away. I still don’t think mine compares to some of those I’ve seen today.”

While he’d prefer that his name be associated more as a competitor who generated the most with the least, he’s still haunted by the reminders of a grisly crash that some rank as one of the worst in the class.

Tim Grose, a former nitro Funny Car driver, has been an interested spectator to the recent controversy of the Funny Car chassis and subsequent crashes, but points out that while his was bad for that era in drag racing, he’s seen a lot worse today.

“I was fortunate to walk away. I still don’t think mine compares to some of those I’ve seen today.”

While he’d prefer that his name be associated more as a competitor who generated the most with the least, he’s still haunted by the reminders of a grisly crash that some rank as one of the worst in the class.

In his era, Grose threatened the big runners of his day with an intense competitive drive and attention to details.

It was that competitive drive when combined with an uncharacteristic lack of detail which threatened his mere existence one Saturday afternoon during qualifying at the 1980 NHRA Springnationals in Columbus, Ohio, one of only nine NHRA Winston national events that year.

Grose, now a builder of high-performance engines, remembers he could have easily lost his life or emerged from the accident severely maimed.

Just to set the stage, in that particular era, a lot of Funny Car safety specifications were still on the edge of archaic with drag strip design (single Armco guardrails) even more antiquated. Qualifying was not the same regimented process that we enjoy today.

On that humid day in Ohio, Grose was running successful in the midst of oppressive humidity. His intention was to keep hitting while the iron was hot and certainly, his Datsun 280ZX Funny Car was settling into a performance groove.

That groove was quickly shattered when the combination of tire shake and hung throttle crossed paths.

Grose had an inkling that throttle would give him problems one day. However, on this particular weekend, he just couldn’t force himself or his team to step away from preparing the car for another run to repair the potentially fatal flaw.

“There were a lot of things going on with that car at the time that happened,” Grose recalled during a phone interview from his Michigan shop. “I had an ongoing problem for three weeks where the throttle would hang underneath the throttle stop. I kept telling the guys on my crew that we needed to get it fixed up. We knew we needed to put a bigger stop under that throttle pedal so it wouldn’t stick.

“This went on for three weeks. My first run at Columbus, it was 90 degrees. It was oppressive humidity. I think we were fourth and every time I went up there to qualify, we did really well and kept hanging in there.”

Grose’s fateful run was originally intended to be a simple launch to the eighth-mile and lift. He planned to fix that pesky throttle problem as soon as they returned to the pits.

“There was nothing out of the ordinary to suggest this was going to happen, at least not that bad,” Grose said. “It was normal business in the cockpit because you are so focused on accelerating from one end of the track to the other.”

Minutes earlier, Grose had pointed out the throttle problem to a crewman.

“You forgot to remind me to put that different stop on there,” Grose remembered telling him seconds prior to firing the engine. “I told them we had to fix it before the next run. When I went up there to run, I had to purposely push down on the right side of the throttle. I did that so that it wouldn’t get hooked under the throttle stop.”

Three-hundred feet into the run, all hell broke loose.

“I got ready to get out of the throttle and it got hung up,” Grose said. “It turned so quick that I said, ‘Uh Oh.’ When it hit the left guardrail, it ripped the steering wheel out of my hands and dislocated my fingers because I was holding on so tight. When it bounced off the wall, it angled 45-degrees and it picked up speed. I realized slowing the car down by grabbing the brake was futile and I said the world’s quickest prayer and asked the dear Lord, “Please not my arms or my legs.”

Grose remembered just moments before an involuntary blackout that he employed self-preservation techniques.

“I ducked down in the seat and braced myself,” Grose said. “When the car hit, it pirouetted straight up in the air and I looked down to see one of those wooden posts holding the guardrail as I came down. I couldn’t bear to look, so I turned my head but by the time I hit, I did a few barrel rolls. 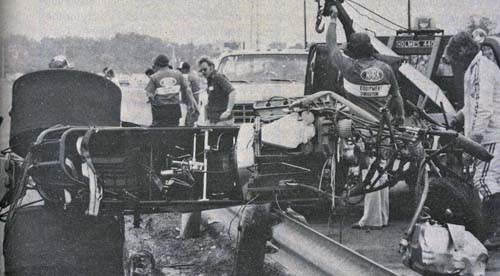 What happened next as the horrified spectators at the Columbus National Trail Raceway looked on in silence is something Grose can only piece together through Diamond P footage.

“I came back to for the last few contacts with the guardrail,” Grose said. “I was totally intact. The thing stopped. I had fuel all over me. Fuel was dripping off of the roll cage. One of the fire bottles broke and it sprayed all over.”

Grose then pounded furiously on a harness belt that refused to open, and it didn’t for good reason. The safety device was not configured to work in the same procedure traditionally employed. New advancements had been made since a previous accident by Billy Meyer trapped him underneath water as he car crashed at the end of a strip in Lakeland, Florida. New regulations implemented made a simple quick release the only requirement to escape.

Grose said he emerged from the dazed state long enough to reacquaint himself and emerge from what was quickly developing into a fiery inferno not completely captured in that classic video footage.

“I slid out of the car and ran into the ditch,” Grose said. “I dove into the ditch and that was about the time the fire bottle exhausted itself. The video never showed the fire reigniting and getting even larger. The fire around the car erupted big time. Getting out of that car in the condition bordered on (being) a miracle.”

Some might consider Grose getting back in a Funny Car again to be an even larger accomplishment. A testimony to his resolve, Grose and the crew not only built a new car in eight weeks, but also went to the pole at the next event, the NHRA Grand Nationals in Montreal, Quebec. The No. 1 spot was achieved on the first run for the new car.

“I had to get back on that horse,” Grose recalled. “You know, I had prayers answered that day I wrecked.”