This was more than a t-shirt campaign; it was a way of life.

Charles Carpenter is lucky he didn’t get himself hurt – hurt real bad. But, it was a chance he was willing to take to go fast.

Carpenter, of Charlotte, NC, had a mountain-motored 1955 Chevrolet that was capable of running 8.80 elapsed times in 1983, a feat rarely achieved outside of the professional ranks during that era.

A longtime fan of the double-nickel Chevrolet, Carpenter’s shoe box was barely safe enough to run 9.90s. That didn’t stop him from pushing to limits that defied logic.

Carpenter had to be the quickest and fastest of his body make and that led him by the end of the 1983 season to bolt on a nitrous oxide kit that upped his pace to solid [and unheard of] 8.30s.

Carpenter quickly gained company as race fans soon clamored to the IHRA events to see such Top Sportsman novelties as the “world’s fastest” '57 Chevy, '57 Ford, '58 Plymouth Fury, '78 Mercury Zephyr, '66 Chevy II, '41 Willy's, '62 Chevy amongst a multitude of others seeking to make a name for themselves in the class as well as the media.

This movement can be directly traced to the success of the IHRA Top Sportsman Quick Eight events, a precursor to the formation of the Pro Modified division. The overnight sensation of this trend surprised many, especially Carpenter.

"It kind of blew me away - I really wasn't thinking about it," confided Carpenter. "It was kind of accidental that all of this happened. We weren't trying to do anything intentional to make this happen -we were just having fun doing what we loved. I think Dave Bishop deserves a lot of credit for getting it all started. It was a pretty wild thing and I didn't think a lot about it in the early going, but as the media got a hold of it and it started to gain momentum, well, of course it got our attention. Even today, people still talk about that era when there was the World's Fastest whatever."

In this episode, six-time Pro Modified champion turned fuel Funny Car racer Scotty Cannon tells the story about the day his mouth wrote a check he wondered if his butt... https://t.co/eqq9lLrCcu 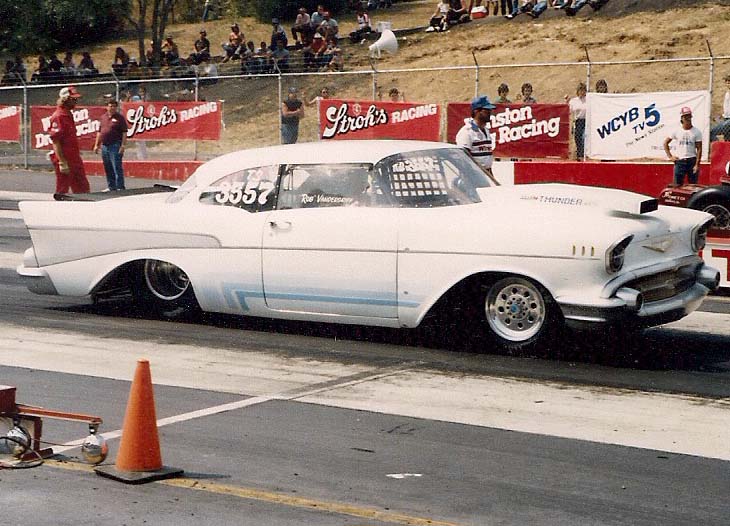 Many of these cars that forced this trend were original steel-bodied cars that later gave way to state-of-the-art fiberglass renditions. Those early “deathtraps” gave the most credence to the movement.

"We forced more horsepower into our cars than needed to be there and our clutches were very antiquated," recalled Carpenter. "We were trying to learn the clutch combinations, and we had 1100 Goodyears, if people can remember those. That was a little short-roll out tire. Couple all of that with the racetracks that we raced on and it got pretty scary. Some of them needed to be closed ten years before we got there and are probably still running today. Concrete starting lines weren't even the norm back then and the announcer was exactly right when he said that a prerequisite for being able to race with us was in the ability to show both sides of the car from the back."

Another person just as responsible for the success of the early fast classic doorslammers was Knoxville, Tennessee's Robbie Vandergriff. He entered the scene a year after Carpenter's nitrous debut with an equally impressive 1957 Chevy owned by Jim Bryant.

"A lot of the cars were carrying monster motors in a homebuilt chassis," said Vandergriff. "The stuff we were trying to do had never been done before. When you're young and dumb, it didn't really matter how dangerous it was. We didn't think about that.

If you've ever wondered how Pro Modified came to be, check out this three-part historical series which travels back to the grassroots of the volatile doorslammer division. #DragRacingHistory - https://t.co/X2TEH8NhEj pic.twitter.com/LiZaI0Ws8x

"The first pass I ever made in that '57 Chevy, the parachute came off in the lights. I was running about 175. The bracket fell off. I was at Edgewater and I went past the first turnoff and the PTS guys were on their trucks and rolling. I ended up sliding it around to stop. It was a constant thing to repair the cars after each run. You wouldn't believe. Headers were falling off."

Before long, a former NHRA Comp eliminator racer named Norm Wizner and his chassis builder Richard Earle joined Carpenter and Vandergriff. They brought a '57 Ford Fairlane and a '58 Plymouth Fury into the group. Not to be left out, they were joined by former Super Stock and AMC Pro Stock entity Gordy Foust.

Wizner went from a roadster to the Fairlane. He ran A/Street Roadster in NHRA Comp and had been an 8.20 best.

"I felt comfortable with this group," said Wizner. "The only downside to the whole deal is that I didn't have as many readily available parts because I was running the Ford. I think we fit in pretty good. In the early going I told Robbie and Charles that I was going to build a Ford to race against them and they thought it was a great idea."

The one thing about the second phase of this group is that their cars were much safer than the initial entries of Carpenter and Vandergriff. Wizner pointed out, "I know that when we built our car, it was to the best spec available at the time. We upgraded along the way. As the years went by, each one of us improved on our design and technology."

There were many perks to running in this traveling circus. One of the best money-making opportunities was in booking match races.

"While the match racing was going on, it was probably the best time of all," explained Vandergriff. "The cars had their own personality. I always had a blast."

Earle, who elected not to drive his creation, instead employed driver Paul Strommen to pilot his Mopar called "Christine," added, "I look back at those day and I know they were some of the best ones that I've had. We did a lot of match race dates and it was truly a memorable experience. We could pack the houses all over the country."

An interesting point is that all the charter members had model cars fashioned after them. That was an accomplishment that Carpenter credits longtime friend Johnny Roberts with. When it came to holding their own in souvenir sales, the group did that and then some. That's why the nostalgia-bodied flopper trend did little to shake their confidence.

"Even when Tom McEwen came out with his '57 Chevy Funny Car, which was a pretty awesome piece, we did very well," said Vandergriff. "Racing fans don't really care who comes out with it second or third, they only care about who did it first. We'd go places and he'd be there and I never knew if we could hang with him in souvenir sales. Having the other four cars there only helped my deal."

If it weren't for the souvenir sales, many could not have been out there. They mainly got by with the help and support of each other. Every member of the World’s Fastest Group got by largely on massive t-shirt sales.

"Charles ran out of his own pocket for the longest time," said Vandergriff. "Poor old Charles, he had sponsors, but none would ever pay him. We had to help each other. I had a little more financial backing than the other guys. If someone needed something, we had it to loan. We kept track with a board in the trailer. One time my sponsor came up to me and told me that if I didn't get all of these parts back in and if there came a time that we couldn't race because we were out of parts and they were loaned out, I was going to be fired."

Before long, the reality and expense of competing exceeded what the t-shirts could bring in.

"The class grew so fast, and there was such an influx of cash needed to run that it kind of pushed the World's Fastest Group out," said Carpenter. "Robbie and I were always the two heaviest hitters and the two of us probably had the most success of the group. When Robbie went away, I stayed in it a little longer. But, the money just went away."

Many will agree that the group always managed to be in the right place at the right time. Wizner and Carpenter were during the 1987 IHRA Fall Nationals in Bristol, Tennessee. The IHRA had toyed with the idea of a Quick Eight shootout on Saturday night to cash in on the trend that the Southeastern drag strip operators were lining their pockets with. The sanctioning body ended up with a Quick 4 shootout, as there was a difference of opinion as to who would pay the money. Carpenter, Wizner, Gordy Hmiel and Bill Kuhlmann were the four that pulled off this historic horsepower exhibition.

That particular event was what sparked Pro Modified's evolution on a national event scale, adversely affecting the World's Fastest Group.

"It started to taper off some, but I don't think it officially died until some time in the 1990s," said Carpenter. "I was fortunate enough to have run with SUPER CHEVY longer than anyone else. I finally called it quits in 1996. There was still a little bit of activity going after that and then it eventually went away."

Carpenter felt the one positive thing that came out of the experience is the bonds and friendships that were formed as a result of the “World’s Fastest Group.” Their vicious competition may have looked like rivalry on the surface, but the fact remains that each had mutual respect for one another. Carpenter had the greatest admiration for Vandergriff.

"Robbie was always great for the sport," said Carpenter. "He and I always had a good relationship. We battled it out with each other and it was always fun. I think we all used Robbie as our gauge of how well we were doing. Anytime I could run with him that was a major feat for me because I did it on a quarter of the budget."

Wizner misses his old friends. "I miss being with all of my old friends," recalled Wizner. "We had a pretty interesting group that went out and raced against each other."

The story of this group was probably best summed up by Foust, who piloted the '66 Chevelle.

"I felt as if I was extremely fortunate because it was like being in the 'sixties, racing all over again," he explained. "It was an indescribable era. It brought back the same feelings as the first time I bought a 1966 Chevelle."

And for Carpenter, it was just like the old days when he raced an all-steel ’55 Chevy – the world’s fastest one.