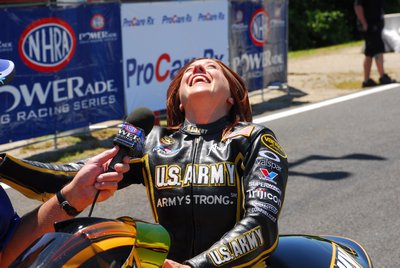 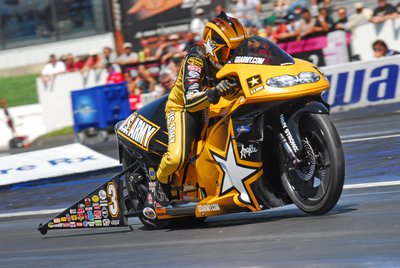 The former nurse and beauty queen zipped through the timers in 6.871 seconds at 194.21 mph to shatter the previous mark by three hundredths of a second, a massive amount of time in drag racing. Her Q4 pass of 6.927 validated the national record.

Sampey had a hard time getting her arms around her record elapsed time, which occurred just past noon. It was by far her most impressive of her 42 career top qualifying efforts. The U.S. Army Suzuki rider has now earned the No. 1 position three times this year.

"I was totally shocked," Sampey said of her record run, which has already been backed-up to make it official. "The bike left well, it felt straight, and I hit my shift points. Steve [Tartaglia, tuner] was aiming for a 6.91 so I figured it was close to that. Then I pulled off and the EMT's were clapping and jumping around so I pulled over there and they said 6.87. I had to ask them three times because I didn't believe it. I wanted to see the [time] slip."

Friday's top gun, Andrew Hines, slipped to second with his career-best pass of 6.910 at 193.57 mph on the Screamin' Eagle Harley-Davidson V-Rod. Chip Ellis remained third on his Drag Specialties S&S Buell with a best of 6.950 at 192.30 mph.

Schumacher and Johnson's nighttime passes were untouchable in Saturday's heat. This was Schumacher's fifth pole of the year in his U.S. Army dragster and the 40th low qualifier award of his career. Johnson's eighth career pole lifted a lot of pressure off his shoulders as his Chevy Impala has given his team fits this year. 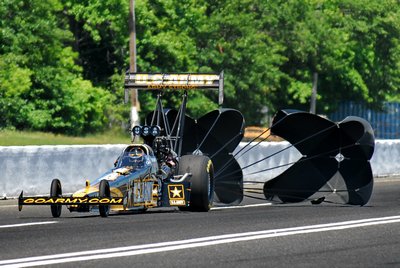 "Like usual, the Friday night run was the hero run, but being low of that round we just finished with a 4.60 is just as impressive to me," Schumacher said. "That was just a good, old-fashioned get-it-down-through-there run in the heat of the day."

The timing couldn’t have been better for Johnson, who was at the Greenwich, Ct. headquarters of title sponsor Skoal for two days earlier this week. And on Sunday, Johnson will be hosting two busloads of Skoal employees and family members. 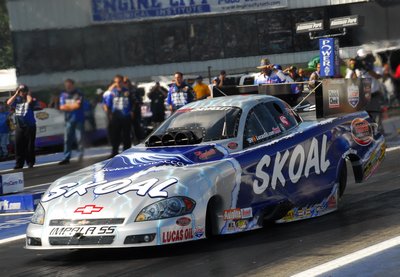 "It's looking more and more like we have found the consistency we've been lacking," said Johnson, who had the best pass during three of the four qualifying passes. "We pushed the limit this morning and smoked the tires so we put it back, so to speak, to the way it was before and we were low of the final session with a 4.86, so it's responding to the changes we're making." 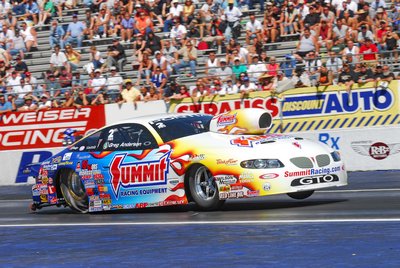 Anderson's seventh low qualifier of the season's first 10 races ruined Stevens' chance to be the low man in the class for the first time since last year's Chicago race. Instead it will be Anderson's Pontiac GTO leading the way once again as the current POWERade points leader will try to extend his lead over the chase pack in Sunday's eliminations, which begin at 11 a.m. ET and will be televised by ESPN2 beginning at 10 p.m. ET.

"I've got so much beyond what any driver could ask for," Anderson said. "I have a great car that can win every week. I'm a very lucky man to have the team I have around me and to have [team owner] Ken Black's support. I was kicking the dog yesterday when I was second. That's how spoiled I've become."
Categories:
:::::: News ::::::