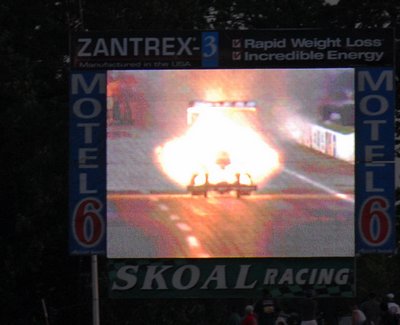 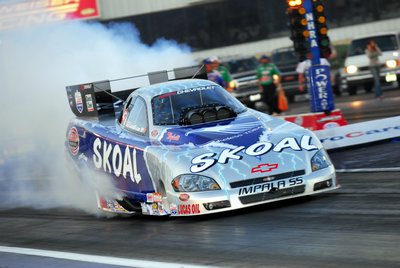 None was more impressive, or unexpected, than Johnson's pass, which instantly pulled the veteran racer from a season-long slump. Top Fuel ace Tony Schumacher's 4.455 also got the near-capacity crowd excited, as
did Richie Stevens' lightning-quick 6.598 in Po Stock and Andrew Hines' spectacular 6.910 in Pro Stock Motorcycle.

After spending two days this week at the Greenwich, Ct. headquarters of sponsor Skoal, Johnson showed up with the best Funny Car on the premises, turning in the the best pass in each of the first two rounds of qualifying including the track-record pass in the night session.

"The way this year has gone I feel like Rocky Balboa. We've just taken so many body shots and yet we're still here fighting," Johnson said. "We finished (2006) so strong and we tested like crazy and we were so fast. Then the season started and it just fell apart. We were like, 'what is going on?'

"We literally changed everything on our car, everything, and it still didn't improve. We finally just pushed the whole thing to the back of the shop and left it there just like it was and built a new car from the ground up. It hit the track in Topeka and, combined with the hiring of (clutch specialist) Scott French, we've just done a 180-degree turn." 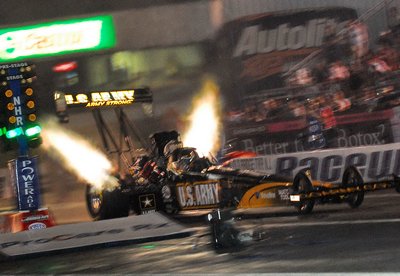 Schumacher was at ease after blazing down the strip in 4.455 at 331.94 mph in his U.S. Army dragster. The four-time and reigning Top Fuel champ seems pleased to be running well and will most assuredly not need a heroic comeback like he had in 2006 to remain a contender for this year's title.

"Alan [Johnson, crew chief] came in here with a bit of a chip on his shoulder," Schumacher said. "I don't think he's ever won here with [Gary] Scelzi or Blaine [Johnson] and I know that's something he wants to change. You know, we have A.J. because of this place. We didn't qualify here in 2003 and that's when Dad went out and hired him. We've been on a pretty good roll since then."

Longtime racer Cory McClenathan of Team Fram is fifth overall after a 4.516 that ended with a giant fireball at the top end. McClenathan avoided hitting anything as he fought to get his car stopped but the fire damage was extensive. 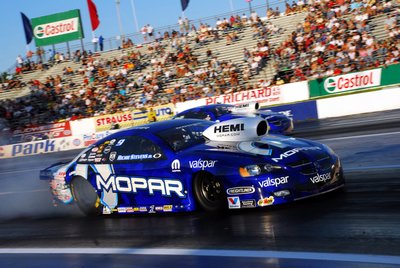 Pro Stock leader Stevens continues his love affair with Old Bridge Township Raceway Park as the two-time E-town winner is the surprise qualifying leader here. Stevens, who won this race in 1999 and 2001, accounting for a third of his career wins, posted a career-best 6.598 at 209.20 mph in his Mopar Dodge Stratus R/T to secure the provisional pole.

"The night session is very important, especially for the Pro Stock cars," Stevens said. "We run carburetors, (they're) naturally-aspirated,and whenever the session is the coolest is probably going to be our best. The night session is always the best for us. It's hard to make itwork sometimes because you only get one good night session in. You kind of got to take advantage of it. Luckily, we did. We ran a .59, which is awesome for us."

POWERade points leader Greg Anderson knocked three thousandths of a second off his opening-round pass of 6.609, but he still dropped a spot on the grid to second overall with a 6.606 at 209.33 mph in his Summit Racing Pontiac GTO. 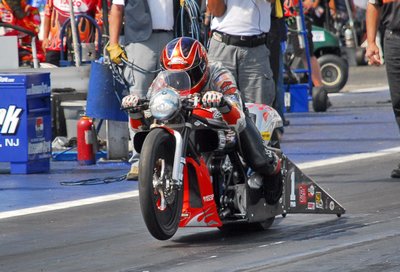 Chicago winner Hines hasn't lost a step with his Screamin' Eagle Harley-Davidson V-Rod Pro Stock Motorcycle, running a 6.910 at 193.57 mph to take the top spot on Friday night for the second race in a row. Hines' run was the second quickest in class history. He also posted a 6.932 earlier in the day.

"E-town is such a great place to race," Hines said. "It's like a playground out there for Pro Stock. You're at sea-level and the air is good; when Mother Nature decides to give us good weather here you can fly."

Angelle Sampey was next on her U.S. Army Suzuki but she was a good bit behind Hines with a clocking of 6.949 at 192.41 mph. Chip Ellis followedon his Torco Buell V-Twin with 6.950, while Karen Stoffer was fourth overall with a 6.960 at 193.24 mph on the Geico Motorcycle Suzuki.

Connie Cohen suffered abrasions to her right hand but was alert and conscious after driving through the top-end sand trap and catch nets on her Suzuki. She was transported by ambulance to Raritan Bay Medical Center in Old Bridge.
Categories:
:::::: News ::::::