When the win-light came on in Jerry Savoie’s lane, it sparked a starting line celebration that included most of the other drivers in the Pro Stock Motorcycle class.

It was the fifth time in the 55 year-old’s career that he raced for a national event championship. It was the first time he was able to seal the deal. 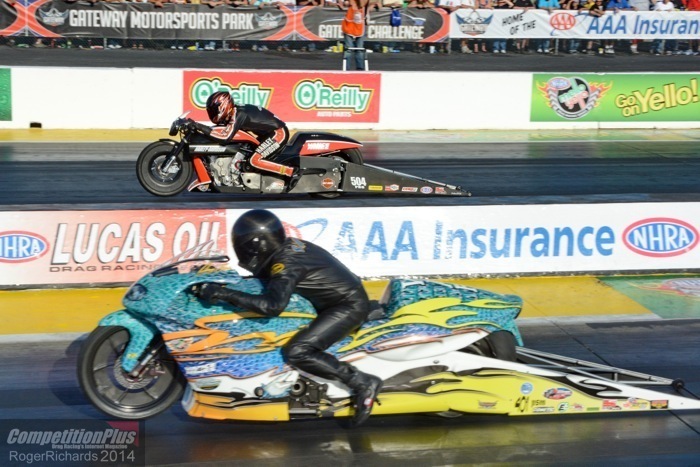 When the win-light came on in Jerry Savoie’s lane, it sparked a starting line celebration that included most of the other drivers in the Pro Stock Motorcycle class.

It was the fifth time in the 55 year-old’s career that he raced for a national event championship. It was the first time he was able to seal the deal.

Savoie was able to knock off Andrew Hines to win his first title, using a strong starting line advantage to get out front and leaning on his Vance and Hines-powered Suzuki TL1000 to get to the stripe first at the AAA Insurance NHRA Midwest Nationals.

“The last four times I’ve been in the Finals I got so mellow and so thankful to the Good Lord, Jesus Christ, for just being there that it just really didn’t matter,” Savoie said. “In that trailer today I said, ‘I’m not getting soft today. When I get up there it’s going to be on.’” 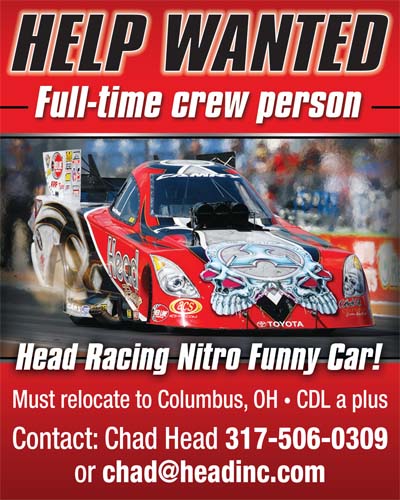 Savoie, an alligator farmer from Cut Off, Louisiana, qualified second at Gateway Motorsports Park. He earned a bye in the first round when Craig Treble was a no-show. He then advanced to the semifinals when Jeff Hall red-lit by -.003 against him in the other lane.

With a trip to the final on the line, Savoie drove past No. 3 qualifier Hector Arana Jr. Savoie had a stout .017 light and clocked a 6.824 at 197.54 to advance to the final. Arana Jr. was strong on the tree as well, posting a .019 reaction time…but he did not have enough power to deal with Savoie down the track.

“We had a good bike all weekend,” Savoie said. “We struggled last week but it was a whole different week this week.”

As for defeating Hines in the final, Savoie is thankful he is a Vance and Hines client. Terry Vance and Byron Hines, the father of Andrew Hines, build the power plant for his Suzuki.

“What was amazing about this race was that we actually had to out-run him,” Savoie said. “I did my job, not like some other weekends, and it just came together. Andrew’s a good racer, they have a great organization…if not for Vance and Hines, Pro Stock Motorcycle would not exist.

“I am very, very thankful that these guys build my engines and just gave me enough power to actually go out there and out-run them. That’s great.”

Savoie missed the Countdown to the Championship by two points, but he isn’t looking back with regret. He is more than happy with how things are going this race season.

“I’m really sincere about where I am in life,” Savoie said. “I’ve accomplished everything I wanted to accomplish in life and have been really lucky. I’ve got good friends, good family. Missing the Countdown was a team thing. We had some issues earlier in the year with fuel injection and we barely qualified in Atlanta. We couldn’t even break seven-flat.

“I don’t blame it on any one thing, and just like with anything, growing pains are hard. We got over that. Hell, we’ve got the fastest Suzuki on the Planet Earth. That’s a great thing.”

Savoie’s White Gator Racing team struggled early in the 2014 season due to a number of variables that led up to one specific struggle…problems at the starting line.

“We really struggled earlier in the year with reaction times,” he said. “We even hooked up a deal on the bike and I beat everybody. We went to Steve Johnson’s pits and I smoked everybody, so we knew the problem wasn’t me…it was the motorcycle.

“We made some clutch changes, some ECU changes and finally started tweaking on it. I had some really awesome lights this weekend. I tried to stay away from the double oh’s…I didn’t in the last round…but it was all good.”

As for the celebration at the starting line after he was able to claim his first Wally, Savoie wants to give his friends and fellow competitors a message.

“Drag racing is a family,” Savoie said. “No matter what happens on the line, if you need an engine or if you need a part…there are certain things we don’t share, but it’s a family thing and it’s amazing that the whole Pro Stock Bike pits was so happy for me.

“I’ve been out here for four years, and I always said if I won one I was retiring. Well, I lied.”