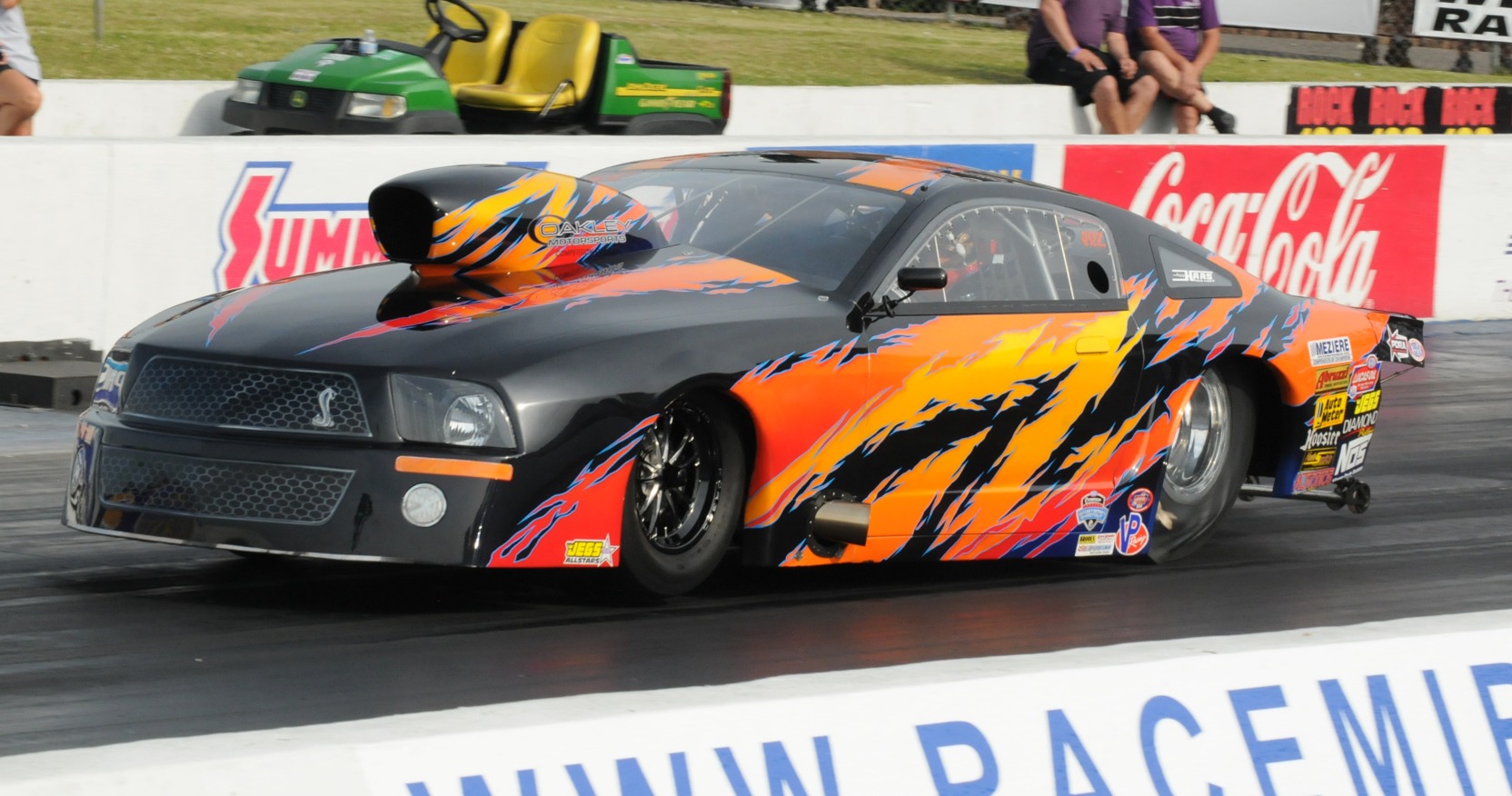 A Ford man from way back, there was a time not too long ago that Cheyenne Stanley won a lot of big money bracket races in a dragster. Now the Kentucky racers says he wouldn’t trade his ‘07 Mustang for three dragsters. Besides the fact that he has also found great success in the Ford previously owned by Pro Stock Champ Brian Gahm, Stanley says it’s simply more fun to race the door car. “In big money bracket racing the dragster is probably the thing of choice because you can see out of them better. I had a lot of success in a dragster, won a lot of money and won a lot of big races, but it’s not near as fun.”

Not only is the sharp looking Mustang fun, it’s often victorious. Cheyenne found himself in the winner’s circle in just his second race out. Last year, in his first full season with the car, he missed the ADRL Top Sportsman Championship by just two heartbreaking points. “I lost in the finals [of the ADRL World Finals] by two thousandths,” Stanley remembered, “and lost the ADRL Championship by two points to Aaron Glaser. Still, it was an awesome experience to even have the story of getting that close.”

This year Stanley is calling the PDRA home, and the new organization seems to fit like a glove for Stanley who has already found his way to the winner’s circle at the recent Memphis Drags.

“The car had been working really, really well,” he continued. “I was in the final at Indy and runner upped. And then was in the semi finals at Norwalk the weekend before Memphis. Friday night [at Memphis] as we made that second pass a gremlin decided to show up. I had a nitrous backfire and blew the intake off. I worked on it until about two in the morning. I started it up and it blew it off again.”

After a call to his engine builder at Oakley Motorsports, Stanley was able to locate the issue. With only about four and a half hours of sleep, Stanley drove his Mustang to the 14th qualifying spot and then took out Chip Foreman and Barry Daniluk in rounds one and two of the Memphis Drags. In the semi finals Stanley met with South Georgia racer Bruce Thrift in his 2014 GTO. Thrift was on his game with a .008 light, but Stanley’s .003 gave him the advantage. Both drivers went three hundredths over their dials, but the Ford would cross the finish line first with a .003 margin of victory.

The final round paired Stanley with Bob Mandell in his 55 Bel Air. Stanley pulled out another .00 light to Mandell’s .023. Mandell ran into tire shake early and Stanley had an easy pass to his first PDRA victory.

“I’m just thankful to God that I’m able to do this. I'm blessed to do this. I want to thank Phillip Oakley with Oakley Motorsports. He has been a real key to my engine program. I do run Ford engines. There’s a lot of people that run Chevrolet stuff, and he’s been a big part of my success. Also, Marco Abruzzi with Abruzzi Transmissions and my nitrous guy, Monte Smith. I also have to thank the guy that actually got me into bracket racing, Kenny Ring. He mentored me about bracket racing and got me into it.”

Like many teams in the PDRA, Stanley’s operation is a family affair. He credits his wife with keeping their excavating business running while he’s away at the races, and his mom can be found on the starting line, backing him up after every burnout.

“The feeling I have of having my mom with me is unreal,” told Stanley, whose son Gavin also races in Pro Junior Dragster. While Gavin joins him at the track, Stanley has four other children, ranging in ages from 1 to 21 who haven’t yet gotten the racing bug.

“January when [an eighth mile series] was up in the air I was really heartbroken. This is the only place I can race on this same stage as my son. Normally there’s no other place to do that. And that’s really the best feeling. Then the feeling the PDRA staff gave us in the winners circle with the jacket and the trophy. It really made me feel appreciated. With this being the first year of the PDRA series, the staff is doing a great job.

“I’ve always - no matter what I do - I always have some kind of deal with God,” Stanley added. “Very few people know this. Whatever I do winning wise I try to give it to somebody or bless somebody with it. Every time I turn the win light on, I thank God. If it weren’t for him we wouldn’t be here.”

Fords, fun, family - and faith - are the building blocks of this humble racer’s success. Stanley and his son Gavin plan to run the entire PDRA series and will head to US 131 Motorsports Park June 26-28 for the PDRA Summer Drags.