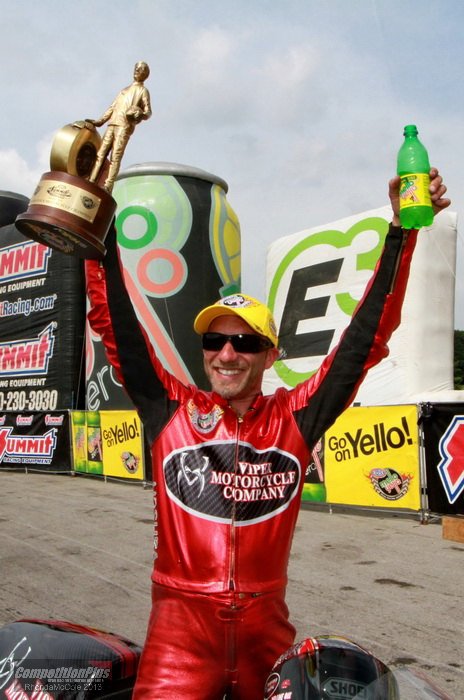 Pro Stock Motorcycle's Matt Smith had his Wally trophy in hand and had to wait awhile to see if Pro Modified-driving dad Rickie Smith would earn one, too, against final-round foe Mike Castellana.

He did Sunday at the Summit Racing Equipment Nationals at Norwalk, Ohio, making the King, N.C., natives the first father-son pairing in NHRA history to hoist Wallys side by side as professional-class winners.

Pro Stock Motorcycle's Matt Smith had his Wally trophy in hand and had to wait awhile to see if Pro Modified-driving dad Rickie Smith would earn one, too, against final-round foe Mike Castellana.

He did Sunday at the Summit Racing Equipment Nationals at Norwalk, Ohio, making the King, N.C., natives the first father-son pairing in NHRA history to hoist Wallys side by side as professional-class winners.

Funny Car's Johnny Gray -- who won Sunday, ironically -- missed his bid at Atlanta earlier this year to take the honor when son Shane Gray was the Pro Stock runner-up.

The Bernsteins, Kenny in Top Fuel and Brandon in Top Alcohol Dragster, shared the stage in 2001 at Las Vegas.

Although the NHRA Pro Modified class does not compete in the Mello Yello Drag Racing Series (it has an unsponsored series of its own), it is considered a professional category.

As Matt Smith sat in the Summit Motorsports Park media center, watching, he said, "It would be awesome to share the winners circle with him. I hope he pulls it off for IDG and the Smith family. Take these two wins back to King, North Carolina, is what I hope happens."

Then he promised, "If he wins, we're not going to tear the awnings down tonight. We're going to party tonight."

And they had a right to party.

Matt Smith missed the chance the previous weekend to win on the same day as his father, who drove to victory at the American Drag Racing League race at Martin, Mich. Matt Smith was runner-up to Michael Ray at the O'Reilly Auto Parts Nationals at Route 66 Raceway at Joliet, Ill., that day. 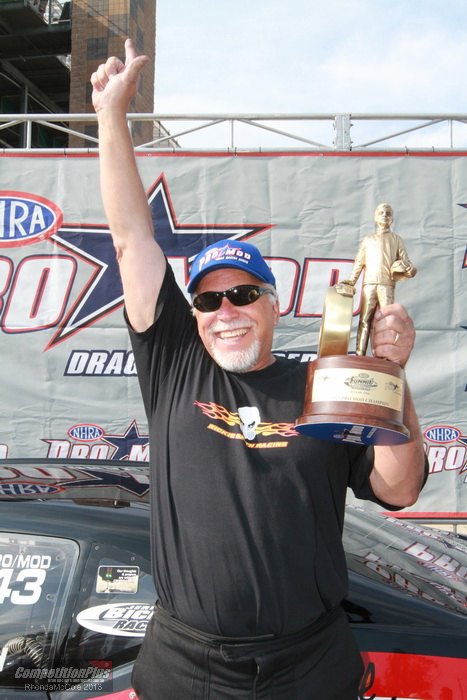 But Rickie Smith sealed the deal Sunday in the all-nitrous showdown against Castellana, driving his IDG Chevy Camaro to 6.103-seconds, 240.77-mph triumph. Castellana  responded with a 6.159, 238.60 in his Al-Anabi Racing Camaro.

With dad dominating the door-slammer drag-racing scene for several decades, it might sound odd that Matt Smith would end up on two wheels. The younger Smith said the explanation is simple.

"He don't want to get out of the car. You see that. He's doin' too good -- he won't let me in there," he said. "I had to take up a hobby that I could afford. I could afford bikes. I couldn't afford a car. One day maybe he'll get out of that thing and put me in there and we'll keep the name going in that deal."

Said Rickie Smith, "I would have let him drive before now, but it takes every nickel and dime to do this stuff. It's not that I don't want him to drive. It's just that I can't afford it."

Besides, he indicated, he's proud of his son for making his own way in racing and even winning the 2007 NHRA Pro Stock Motorcycle series championship along the way.

"He's done everything he's done on his own, just like I have," Dad Rickie said. "He come up working on bikes around home, made him some money. I give him $10,000 the first time he ever bought a bike, and that is ALL I ever give him. He's raised it hisself and done good."

Furthermore, he said, "Matthew's got several more years to race. I don't. All of you know I'm getting close to retirement from driving. It could very well be that if I win the championship, you could probably see me get out. But that's a long ways off."

As for the immediate accomplishment, he said, "I'm just tickled to death to get it done before I quit. It's tough to win, much less both of you at the same time. It's hard to pull these things off at the same time. When you can get a father and son and get that done, it's just a major accomplishment for family and fans. It goes back to NHRA is family."

And the Smith branch of the family has a great reunion in the winners circle Sunday at Norwalk.