JIM NICOLL: A MAN WHO RACED ON HIS TERMS 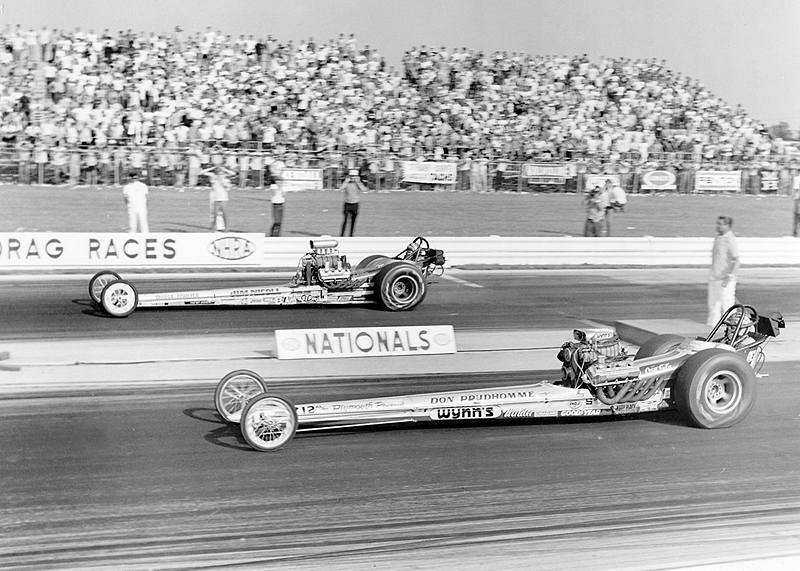 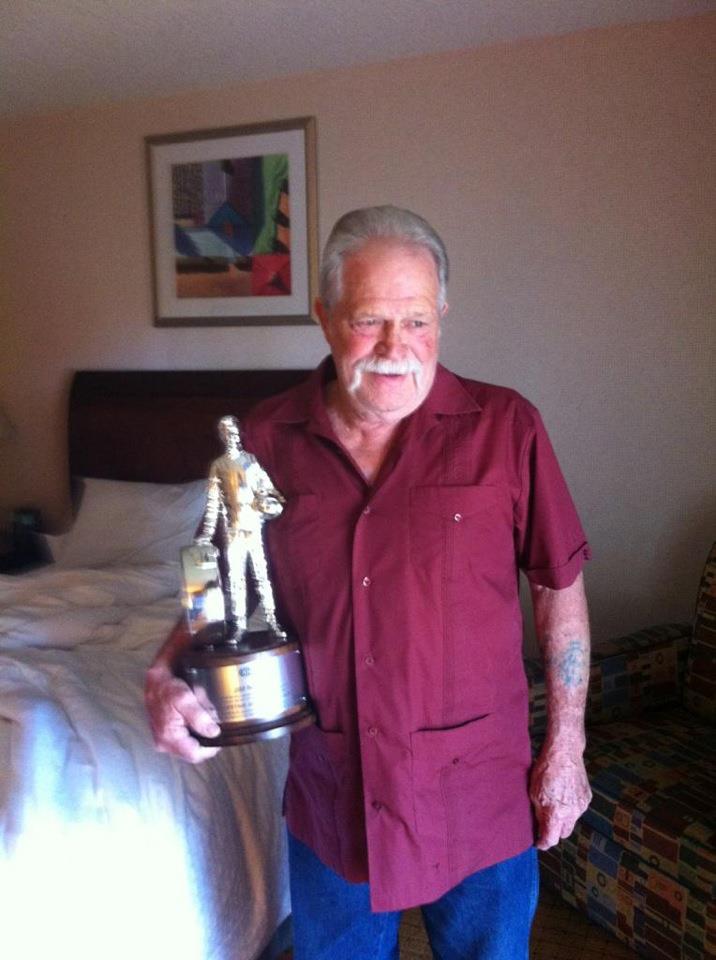 Nicoll poses with the Wally he figured never to get after a prank went terribly wrong.To most people, Jim Nicoll will always be the guy who survived perhaps the most famous accident in drag racing history, his over-the-guardrail tumble opposite Don Prudhomme in the final round of the 1970 NHRA Nationals.

But he's also the guy Kenny Bernstein was having breakfast with when Bernstein got the call that son Brandon was born. He's probably the only guy who's ever driven a slingshot dragster, a rear-engined dragster, a Funny Car, and a motorcycle powered by a Chevy engine. (That one ended ingloriously when he plowed through an outhouse.) And he's got to be the only one who ever turned a fire hose on late NHRA founder Wally Parks while Parks was dining with corporate types at a hotel restaurant. ("I just aimed it at him," Nicoll says. "How was I supposed to know [Ed] McCulloch was at the other end of the hose, turning it on?")

Nicoll will always be known for that Indy crash, but what's forgotten is how, with a little luck, Indy could have been his third national event victory in a row, including the Springnationals at the old Dallas track and the only Summernationals held in York, Pa. "I guess I had a little edge on people that year," says Nicoll, now 74. "I had a Crower clutch, a pretty good handle on the Hilborn injector, some special Firestone tires, and a special fuel pump. I knew a few tricks and maybe even cheated a little."

At Dallas, the rear end broke just off the line in the final round against 22-year-old upstart Bob Gibson, who'd been running consistent high 6.80s and low 6.90s with the Carroll Bros. car. "I had 'em all covered that weekend," Nicoll recalled, and the numbers bear it out. After qualifying No. 2 with a 6.64, he rode steady 6.70s into the final. "Somebody came up with this great new gear they wanted me to try, and it cost me the race. Great,my a**."

At York, Nicoll never even made it to the starting line for the final against the late Pete Robinson, who singled to what would be his last major victory before he was killed at the 1971 Winternationals. "The camshaft broke up at the front right as I came off the rollers," Nicoll says. "The engine didn't blow up. It started and ran for about a second, then just quit." Robinson shut off early, and who knows what he would have run had Nicoll been in the other lane, but Nicoll definitely had the advantage. He qualified No. 1 with a 6.72, had low e.t. of the first round by more than a tenth with a 6.74, and was coming off low e.t. of the meet, 6.71, in the semi's.

Everybody knows what happened at Indy, where one of the greatest fields in Top Fuel history was assembled. Robinson, '71 Gatornationals winner Jimmy King, and '71 world champ Gerry Glenn all qualified in the bottom half of the field, and Connie Kalitta and Steve Carbone, who a year later in their famous burndown would hand Garlits the one loss that still bothers him, were the first two alternates. Nicoll was way up at the top, right between Garlits and Prudhomme.

"We got up there for the final, and I was proud just to be there," Nicoll says. "I'd just beaten Garlits in the semi's. He was in my pit area before we ran, looking at all my stuff. I thought that was cool – 'Big Daddy' checking me out. I told him how good I was about to run, and I could tell he was worried. Then he red-lighted." In the pair ahead of them, surprise No. 1 qualifier Brian Budd also fouled, and Prudhomme landed in his third Indy final in six years. 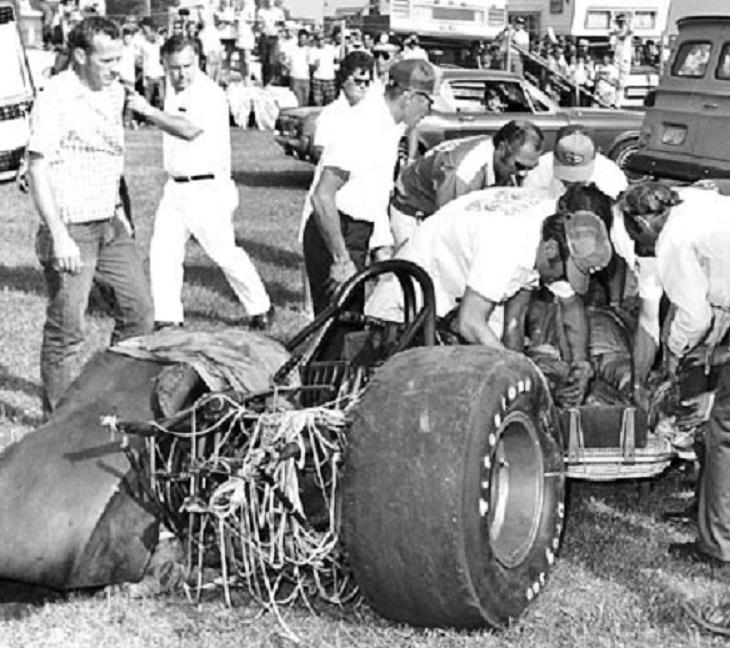 The race ended with Nicoll's car in two pieces. He miraculously emerged relatively unscathed – even after being dumped out the back of this ambulance moments after this photo was taken."Prudhomme and I were never kissing cousins or anything, but we were always friends," Nicoll says. "We respected each other. He wasn't that bad of a guy; the man just did not want to lose. He was serious, always. I never knew anybody who wanted to win as much as he did, except maybe Garlits or Bernstein."

Running off the five-amber countdown that was replaced a year later by the pro tree, they left as one and were side by side to the end in what turned out to be the quickest race of all time, 6.45 to 6.48. "I remember thinking as we came up on the lights, 'I'm going to win this SOB,' then I felt the clutch slipping and thought, 'Oh, no. Here it comes.' I was just going for the parachute handle when it happened."

As seen by millions on ABC's "Wide World of Sports," Nicoll's overheated clutch disintegrated and sawed the car in two. His half went over the guardrail, and everyone was sure he'd been killed. After seeing the front half of Nicoll's car slide past him in the shutdown area, "the Snake" tearfully contemplated retiring on the spot. "Everybody still remembers seeing that on TV," Nicoll says. "I'd run into Prudhomme after that and say, 'Weren't you supposed to quit?' I woke up in the ambulance, but they never got the back door shut all the way, and when it took off, the gurney went flying out the back with me in it. I blacked out again at some point and woke up in the hospital with my ass hanging out of one of those robes that tie in the back."

Nicoll was right back at it immediately with a brand-new T-Bar chassis, and just a week later found himself racing "the Snake" again, this time somewhere in Florida. ("Whipped me again," he says.) But Nicoll's incredible success in NHRA competition was just a part of his 1970 season. 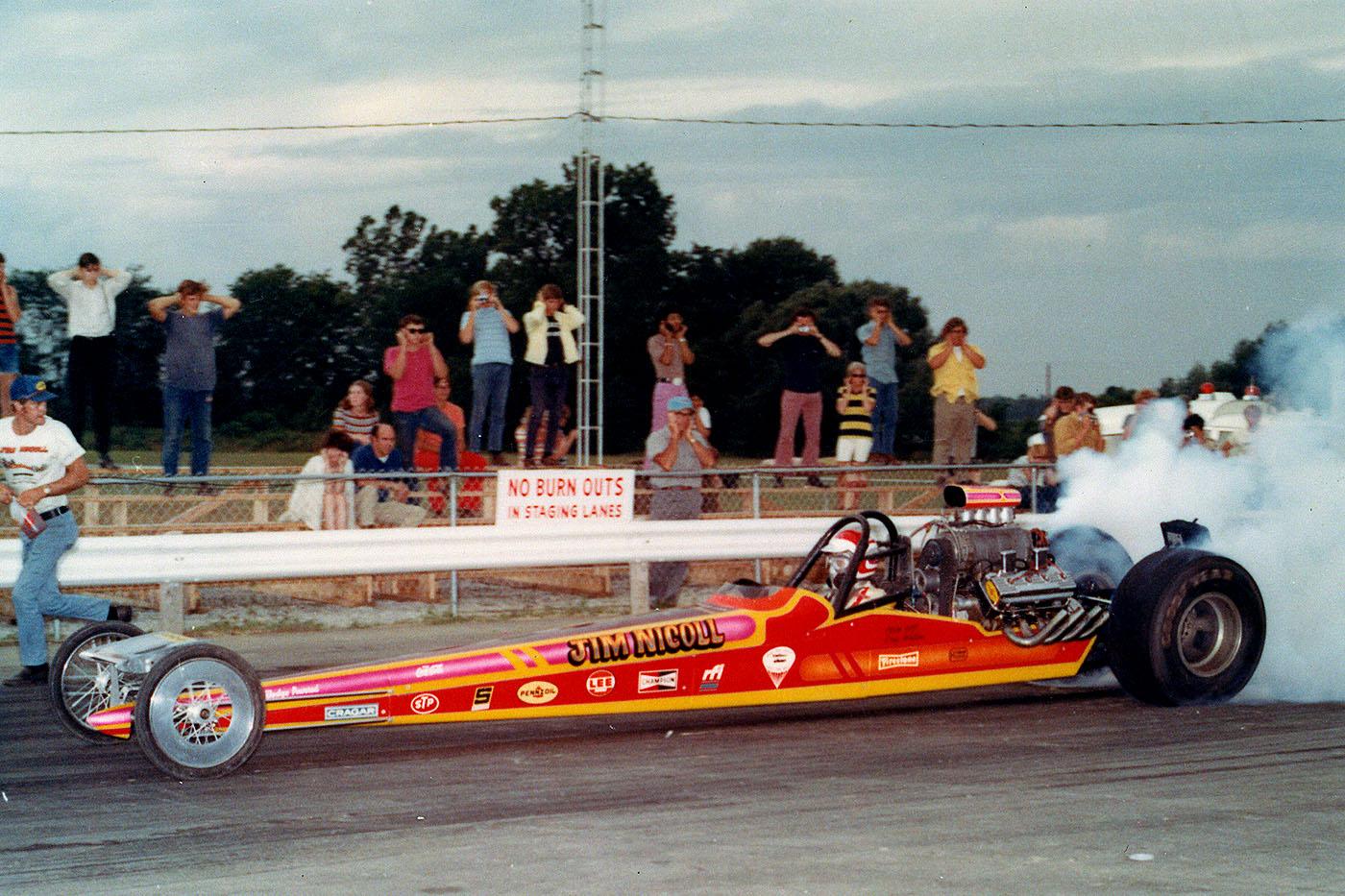 Nicoll, like almost everyone in Top Fuel, had a rear-engined dragster by late 1971, and like many made the switch to Funny Cars a couple years later."I ran a lot more AHRA races than I ever did for Wally," says Nicoll, one of the more prolific drivers in AHRA history, with 19 event titles. "I had to run match races and AHRA stuff to have the money to run Wally's races. I guess AHRA doesn't count to a lot of people, and the pressure wasn't near what it was in NHRA, but it was good racing. [Late AHRA President Jim] Tice was an outlaw, and I always liked him and the way he did things. He never cared about politics – all he cared about was leaving that track with a briefcase full of hundred-dollar bills – and he really treated the racers right. 'Mad Dog' [Don Cook], 'Greek' [Chris Karamesines], Bob Creitz – we had a good time everywhere we went."

This was right when Garlits was developing his revolutionary rear-engined design. Nicoll, like everyone, soon had one, but in less than a year he traded it in for a Funny Car, which were becoming more popular by the day and were much easier to book for match races. "I loved 'em all – dragsters, Funny Cars, the whole thing," says Nicoll, who currently lives in Mexico, just across the Arizona border. "I never worried about chasing some championship. I was ignorant of all the politics of NHRA, never cared about that stuff. Every time I went to the starting line, I just wanted to outrun everybody – not just the guy in the other lane. I was out for low e.t. every time."

Not long after his move to Funny Car competition, Nicoll was one of several drivers involved in serious fires at the 1973 Gatornationals. "Burned that thing right to the ground," he says. "It got so hot … I didn't know anything could be that hot. I said, 'The hell with it,' and tried to jump out, but a tire burned off and when I went to sit back down, the seat was gone. My a** was right on the driveshaft." 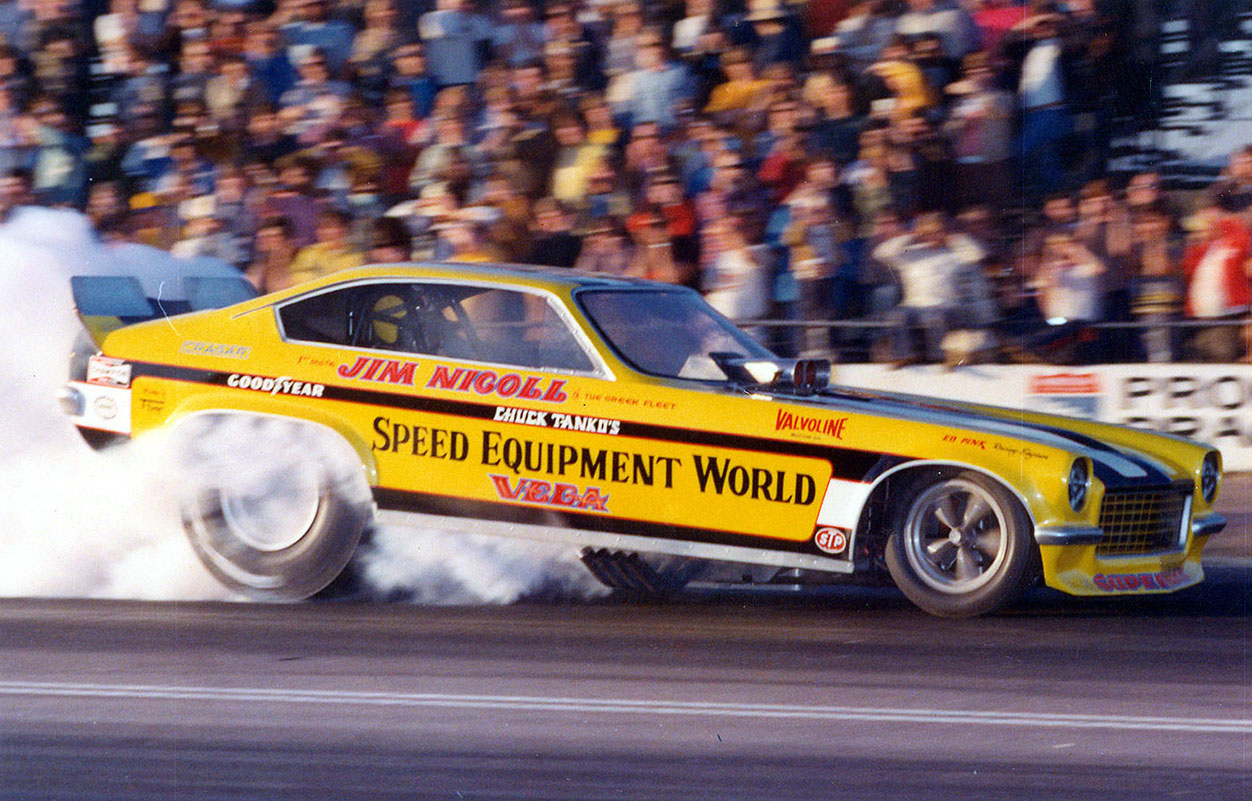 One of Nicoll's last cars was this Vega, Nicoll drove Chuck Tanko's Speed World Vega ("Best deal I ever had," he says), and fielded his own Vega and Monza Funny Cars through the mid-'70s. But when he walked away from the sport, it was, as it is for almost everyone who ever went down the quarter-mile, before he wanted to.

"I spent a year and a bunch of my own money trying to get sponsorship, usually at a bar, over a scotch and rocks," Nicoll says. "I thought I had one all lined up: Lone Star Beer. Willie [pal Willie Nelson] was their spokesman, and they agreed to sponsor my car for more money than I'd ever seen, but they couldn't fund me until the next January. Stupid-a** me, I had the car all painted up, the truck and trailer painted up, and had the car ready to unload it and cackle for them. Then I got the news: Olympia had just bought Lone Star, they weren't going to honor the deal, and it was all over. If I couldn't go back with the money to run with Prudhomme and those guys and race the way I wanted to, I didn't want to do it at all. I'm still not over it."

Nicoll still follows the sport and probably has as many racing greats on speed-dial as anyone. "I still stay in touch with Chip Woodall, Jackie Peebles, Paul Candies, 'Tarzan' [John Austin], Ronnie Martin, Tommy Ivo, a bunch of guys – usually through that stupid computer," he says. "Today's racing … it's a sad thing. Drag racers were one big family back then, and it breaks my heart to see what it's become, but I still love it. I loved Funny Cars, front-engined dragsters, rear-engined dragsters – everything. There's nothing I didn't love about any of it."

Nicoll was honored at last year's Hot Rod Reunion with a lifetime achievement award and received the Wally trophy that a soaking-wet Parks told him the day after The Great Fire Hose Incident of 1971 that he'd never get. He still wants to go 300 mph. "Greek told me I can drive his car any time I want," Nicoll says, "and who knows? One of these days, I might just do it."