The 14th Annual Nitto Tire NMRA World Finals capped off the 2012 racing season with record-breaking performances and championship battles that came down to the finals. Racers, fans, and manufacturers packed the historic and scenic Beech Bend Raceway (Bowling Green, KY) to watch hundreds of racers hit the drag strip for three days of high-speed competition.

The 14th Annual Nitto Tire NMRA World Finals capped off the 2012 racing season with record-breaking performances and championship battles that came down to the finals. Racers, fans, and manufacturers packed the historic and scenic Beech Bend Raceway (Bowling Green, KY) to watch hundreds of racers hit the drag strip for three days of high-speed competition. 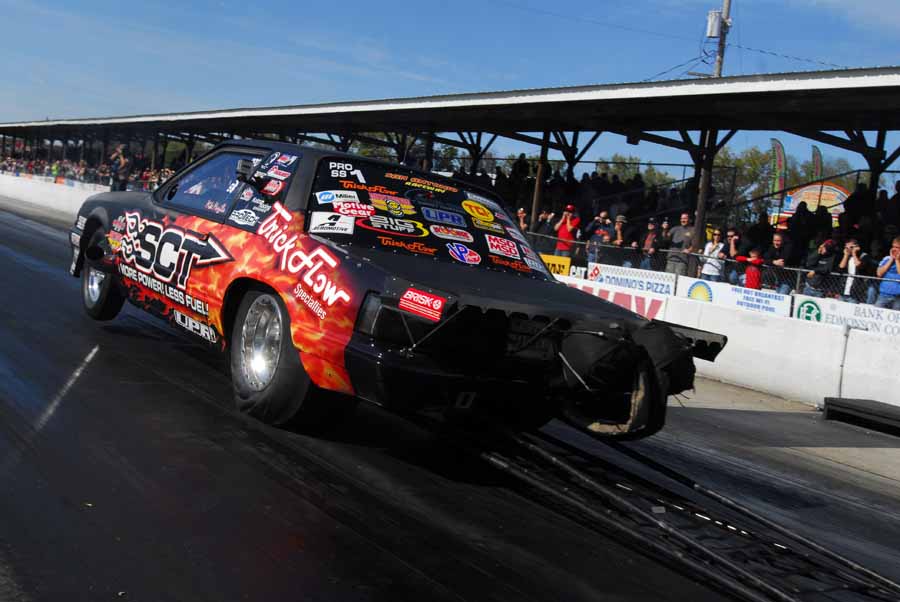 The quickest and fastest heads-up racers of the weekend were entered in SCT Pro Outlaw 10.5. Mike Murillo secured his 13th championship as he took the strip in a mid-6 second slugfest with class rival Tim Essick. The championship would be decided on the outcome of the Murillo and Essick final round bout. Essick had grabbed the record with a 6.58 at 220 mph performance in qualifying. In the finals, Essick left the starting line hard but made a hard move right and was forced to lift. Murillo streaked his historic accomplishment with a 6.64 at 218 mph. 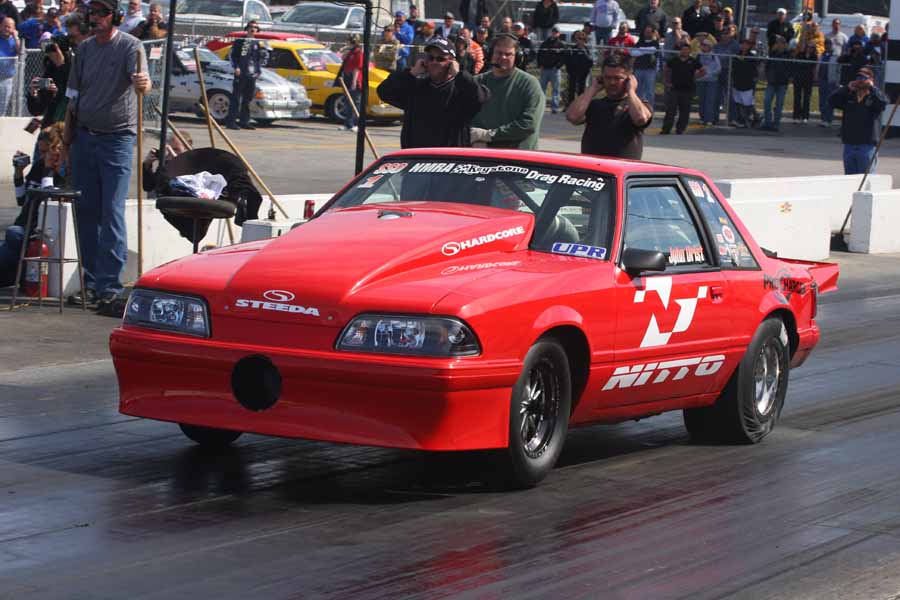 The ProCharger Super Street Outlaw category saw two of the heavy weights conclude their title-bout as one would emerge world champion. John Urist and Phil Hines have fought blow for blow all season long with their ProCharger-blown Mustangs. Hines would set the pace at 7.03 at 200 mph in qualifying. In the finals, Hines would push the head gaskets out on his small-block Ford while Urist streaked to the win with a 7.26 at 194 mph. Urist’s run to the class win and his 8th title would not be without problems from transmissions issues to a cracked supercharger piping. The team thrashed and made repairs after each and every round that culminated in another victory for the Nitto Tire sponsored racer. 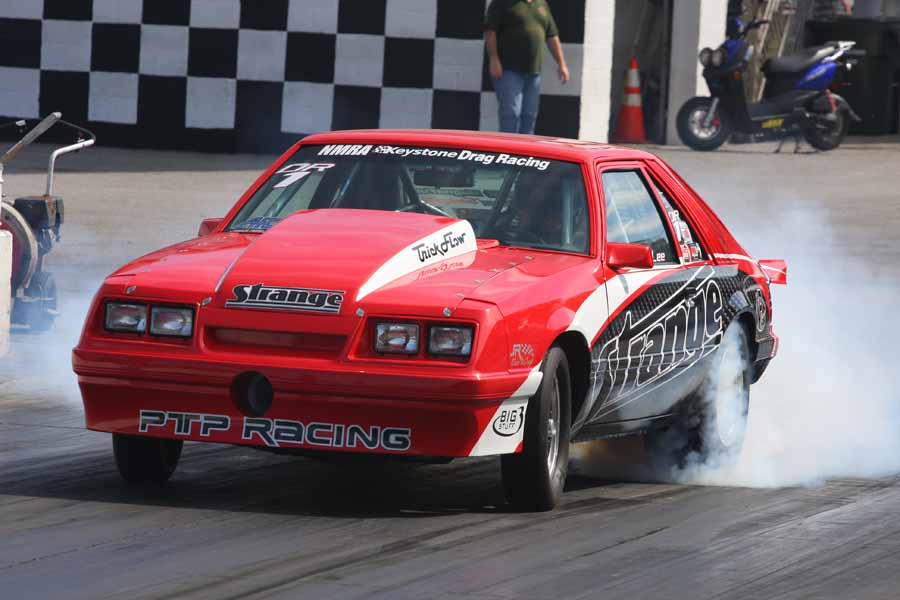 The AFCO Drag Radial category was short and sweet with Jason Lee sealing one of his most impressive seasons with five of seven event wins and obviously the championship. He squared off against the Almond Assassin 1982 Fairmont of Kurt Borton. Lee unleashed a 7.51 at 188 mph to Borton’s 7.92 at 175 mph. The Blow By Racing Renegade ranks were stacked with nitrous and supercharged players capable of mid-8 second runs at most races and a little quicker in Bowling Green. Brian Mitchell marched to the finals by running a class record run of 8.26—backed up by an 8.28. He squared off against newcomer and feared nitrous racer Scott Grove. Mitchell streaked to the win with an 8.28 at 164 mph to Grove’s 8.39 at 161 mph. 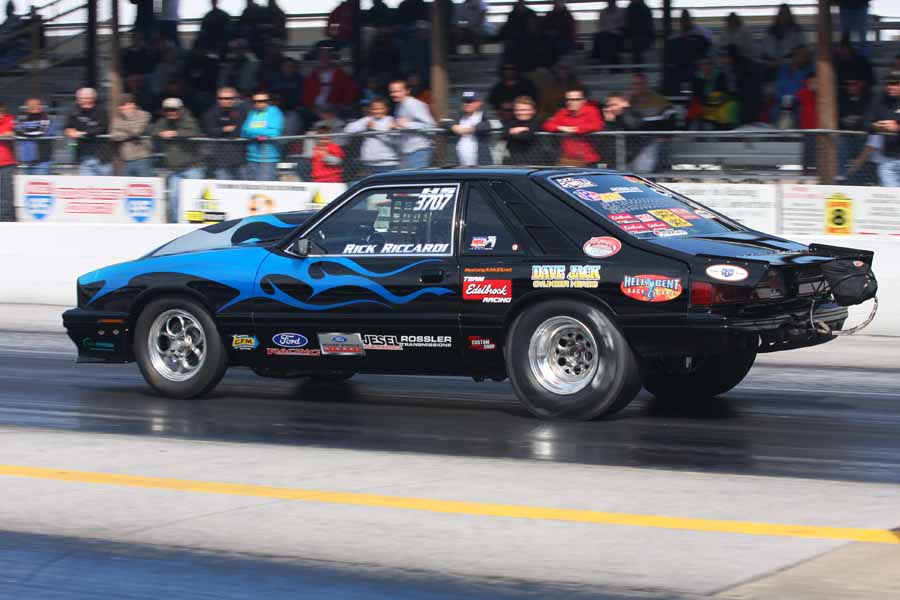 Edelbrock Hot Street saw two longtime competitors line-up for a shot at the glory after Charlie Booze Jr. and Don Bowles were eliminated in earlier rounds. Tim Eichorn, under the crew chief Tyler Eichorn’s direction, made his way to the finals by way of consistent 8.40s. He met up against top qualifier Ricky Riccardi and his Downs Ford Motorsport 1981 Mercury Capri. Riccardi sat on top of the ladder thanks to an 8.40 at 157 mph—courtesy of a new 399ci engine. The final was over before it began as Eichorn went red with a -.008 and Riccardi cruised into his first winner’s circle in NMRA competition. 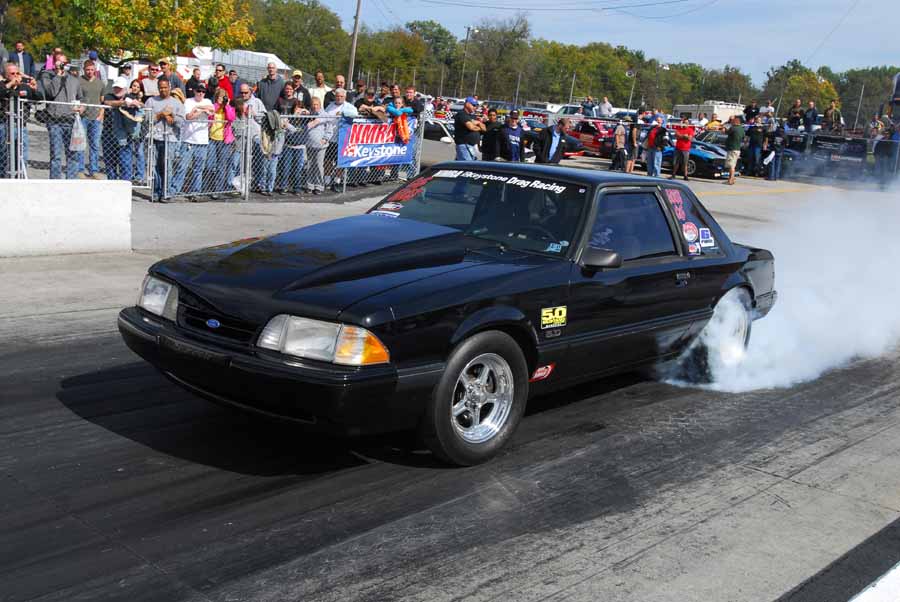 The Strange Engineering Coyote Stock had so many story lines heading into the finals from the championship chase between HiPo Joe Charles and veteran racer Justin Burcham to the wildly fast Shane Stymiest who had blistered quick runs in testing. Burcham was top qualifier with a 10.58 at 124 mph and made his way into the finals with record-breaking fashion—the new Coyote Stock record is now a 10.55. Stymiest would take the final round win with a 10.63 at 124 mph to Burcham’s 10.73 at 124 mph. The final heads-up category is Nitto Tire Factory Stock and Louis Sylvester was top qualifier (10.85 at 122 mph) as well as the class winner. He took the win with a 10.97 at 123 mph to Matt Amrine’s 10.99 at 121 mph performance. 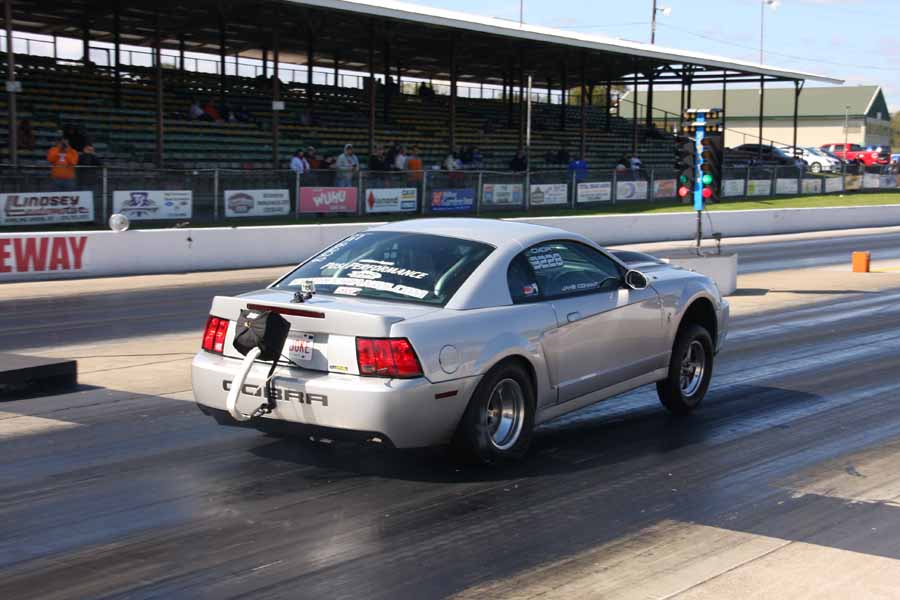 The GT500 vs. Terminator Shootout pits SVT’s two supercharged special edition Mustangs against each other in a heads-up showdown. An eclectic mix of street cars and dedicated drag racing rides made their way to the 1,320 to find out who is the best of the SVT world. The final came down to one Terminator and one Shelby GT500. The Mayor of the shootout, Jacob Conant, would take-on the world’s quickest and fastest Shelby GT500 owned and driven by Tommy Passalaqua. Conant would slay the 8.30 machine by drilling the light and running a career best of 8.97 at 151 mph. Passalaqua ran into trouble and slowed to an 8.95 at 163 but it Conant’s better reaction time that made the difference. 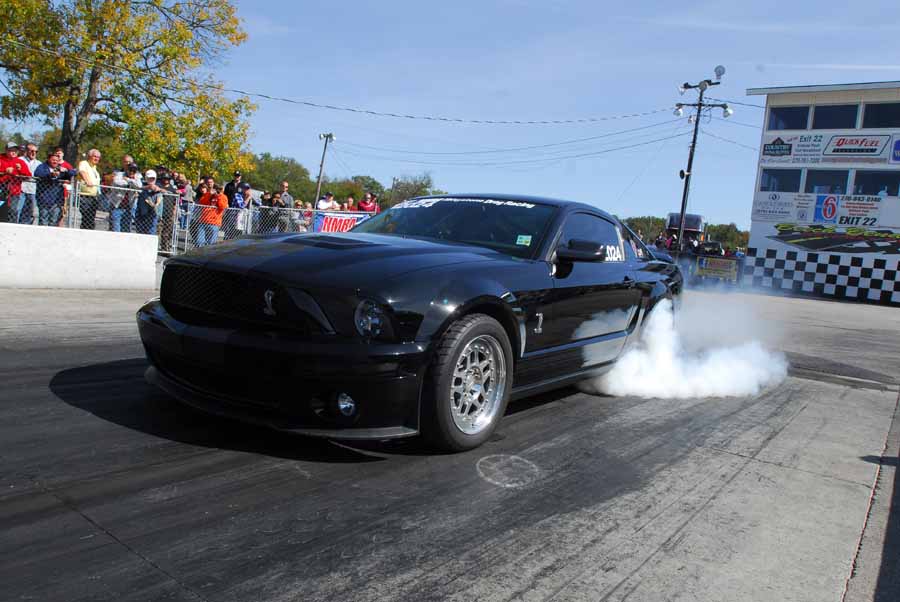 It took five rounds of eliminations to whittle the 30-car field of Roush Super Stang down to just two—JD Coon and Lloyd Mikeska. Coon wheels a 2008 Shelby GT500 that runs 9.70s thanks to a Whipple 3.4L supercharged combination. His deadly consistent attitude brought him to the finals against Mikeska, who runs out of the Dyno Joe camp. Coon overcame a reaction time deficit to drive around Mikeska with a 9.70 on a 9.64 to Mikeska’s breakout of 11.78 on his 11.87 index. The Exedy Modular Muscle category saw Joe Marini go to his first final round in his NMRA career. The turbocharged 2005 Mustang from JPC Racing had been deadly consistent in the 10.40 range all day long. The final was anticlimactic as Randy Mounce broke his car in the semifinals. He took the light but didn’t drive down track and Marini lifted early to roll through the lights with an 11.82 on a 10.43 index. 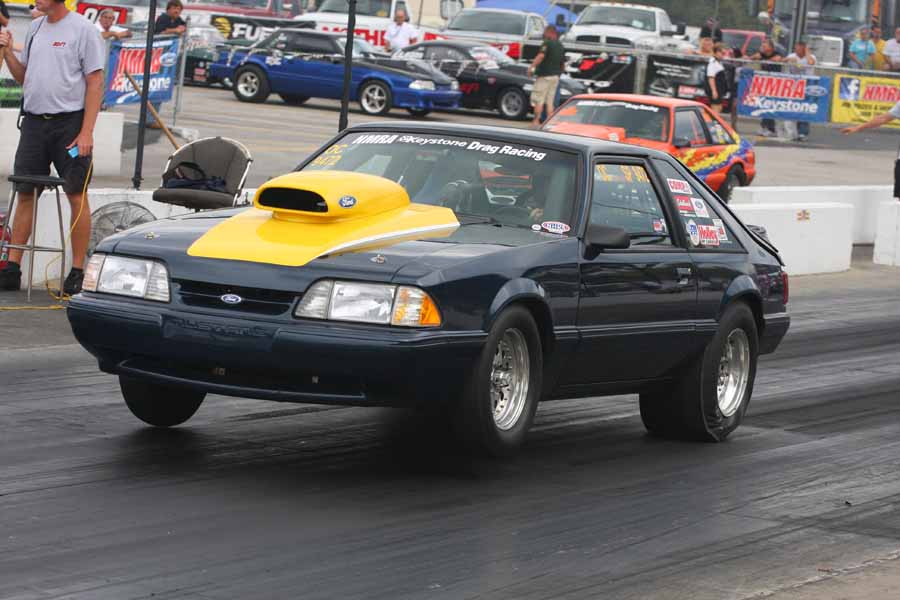 Trick Flow Open Comp was the biggest class of the weekend with 36 racers entered in the breakout category. It took six rounds of eliminations to find a winner and crown a champion. Greg Cole drove his 1988 Mustang to victory with a 9.73 on a 9.72 while his competitor Don Carver ran 10.35 on a 10.35 but lost on the reaction time. Cole made it to the finish line first thanks to a .030 light to Carver’s .067 light. The margin of victory was a mere .027 at the stripe. The Detroit Locker Truck and Lightning finals might have been overshadowed by Johnny Lightning’s first NMRA championship but those keeping track of the race saw Jim Roberts take the win. Johnny was in the finals but his truck had a stutter that slowed him from the low 9-second pace and Roberts won with a 12.18 on an 11.68 index.

The Aeromotive Bracket classes included B1, B2, and B3—B1 is for cars with bracket racing electronics, B2 allows a transbrake and slicks but no electronics, and B3 is DOT tire only. The B3 win went to Bill Feckley as he ran 11.14 on an 11.12 dial-in. The B2 winner’s circle visitor was Larry Traughber in his 1965 Comet. Troughber ran a 7.27 on a 7.24 dial-in. The B1 final round victory was rewarded to local racer Brian Barnard and his 1984 Mustang, which ran a 6.13 on a 6.13 for the win. The Aeromotive Bracket showdown pairs the B1 and B2 winners in a King of the Hill Runoff. Barnard would take the win with another 6.13 on a 6.13 to beat Troughber who went red in the runoff round.