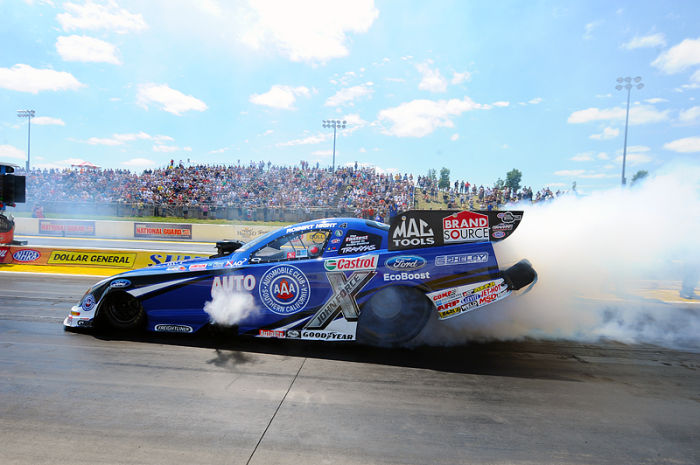 When Robert Hight faced teammate Courtney Force in first round at the Summer National Sunday at Topeka, Kan., it was with used slicks on his Ford Mustang.

According to Hight, using used tires is nothing new for John Force Racing, which includes Funny Car drivers John Force, Courtney Force and Mike Neff, along with Hight.

“We do that all the time,” Hight said Tuesday in a phone interview. “There are several reasons (why they use old tires sometimes). Everybody plays that game. When it is hot, you need more traction. For one thing, the tire will be a little bigger to the stretch, so the gear ratio will be higher and it has better grip. When it is cool and the track is really tight you want a little extra drive shaft speed and a little extra wheel slip, so you put new tires on it (the car), and they are smaller diameter so it is a lower gear ratio.”

Hight said under Sunday’s first-round circumstances at Topeka, changing to used tires was the right choice.

Hight added switching from new tires to old tires and vice verse is a common practice for competitors in Funny Car and Top Fuel.

“About every contender out there does the same thing,” Hight said. “Alan Johnson takes it to extremes and takes new and used tires to the staging lanes on a golf cart. We usually just stay back at our pit until we absolutely have to make the call and Jimmy (Prock, Hight’s crew chief) makes the call and we put on tires accordingly and roll up there. It’s a big part of it (choosing what tire to use). The clutch and the tire size (the diameter of the tire), new vs. used, and what we use is all based on track temp.”

There actually was tire strategy in play when Brittany Force was testing her Top Fuel dragster Monday at Topeka.

“When we ran Brittany’s dragster we put new tires on it every single run, so that we have used tires,” Hight said. “We are coming into the hotter tracks and we are not going to want to be running new tires at all. It gets to a point where your used tires wear out and then you have to put some new ones on. Well, that changes everything. We ran new tires on her (Brittany’s) dragster all day (Monday), so that we have used tires for the upcoming hot races.”

Hight said Brittany Force made five runs Monday in testing at Topeka and she ran a new set of tires on each run.

“We do this and it is not just for my team,” Hight said. “We all switch around and look at each other stuff. It is all John Force’s stuff, we just share.”