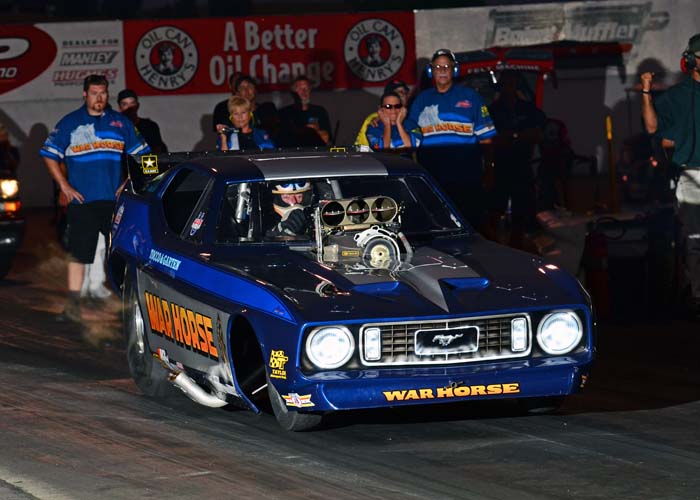 Drag racing is a sport that never seems to get out of a person’s blood. 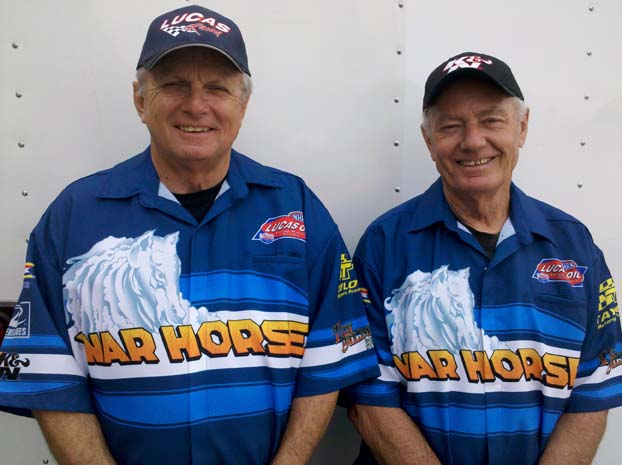 That’s definitely the case with Roger Garten and Mike Tocco.

With Garten driving, they partnered to race a fuel altered back in the 1960s and then they campaigned the War Horse Top Fuel Funny Car from 1973-76.

“We stopped racing in 1976 and Mike and I both concentrated on our work and our families for 35 years,” said Garten, who was the NHRA Division 7 Funny Car champion in ‘75.

After taking a 30-plus year hiatus from the sport, Garten and Tocco have teamed up again to race the War Horse Funny Car at Nostalgia events. They made their debut in 2010 at the March meet in Bakersfield, Calif.

“We found our old fuel altered that we had in the 1960s, the original car, and restored it,” Garten said. “Then, we were going to the Hot Rod reunion places and nitro got back in our blood and that’s all it took. That’s when we decided to re-create the War Horse (Funny Car).”

The War Horse project began in late 2008 for Garten and Tocco.

“It was just a matter of gathering as many parts from the original car as we could,” Garten said. “I still had a can of blue paint in my garage from 1973, so I had the color (of the car) down. Kenny Youngblood painted the sides and names to make it look exactly like the original car. It took us all of 2009 to build the car. The only difference is it is a later model car. It is a little longer. When you look at pictures, the old car just looks a little bit fatter.”

Reconstructing the War Horse was one thing, driving it was a whole different issue for Garten.

“I thought to myself I have been 35 years out of the seat, and a little seat time would not hurt me,” Garten, 65, said. “So, I went to the Frank Hawley Drag Racing School to get some seat time (in a Top Alcohol Funny Car) and make a few laps, so I was not just cold turkey when I got in the driver’s seat.”

Since March of last year, Garten and Tocco have competed full-time in NHRA’s Hot Rod Heritage Series. They also go to a handful of other open Nostalgia races around the country. 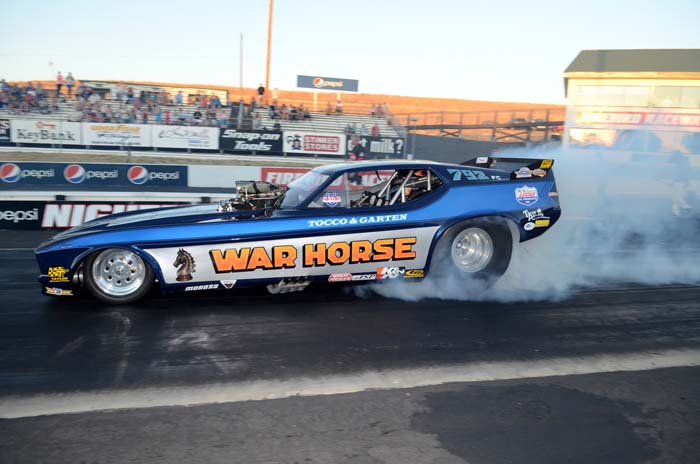 Garten lives in Fallbrook, Calif., in northern San Diego County and Tocco is based in Henderson, Nev. The Funny Car is housed in a shop in Orange, Calif., which is 75 miles from Fallbrook.

“It has really been a lot of fun traveling around and driving,” Garten said. “It is a whole lot more work than I remember. The competition in the Hot Rod Heritage Series also is very good. It does seem easier for me to drive the Funny Car now. Maybe that is because I’m older and I do not get as uptight as I used to before.”

“That was pretty cool,” Garten said. “The car ran great. It didn’t really sink in that we won because it had been so long (since we won a race). It was kind of amazing. I was very surprised everything worked so well with the car.”

“This is a hobby because we are not making any money at this,” Garten said. “It is just a challenge to go out and compete against all these other guys and try to outsmart the other guys. Then, it also is an addiction. Once nitro gets in your blood, it is really hard to get it out. This is just something we wanted to do and we will keep running as long as we can, and as long as we can compete with these other guys.”