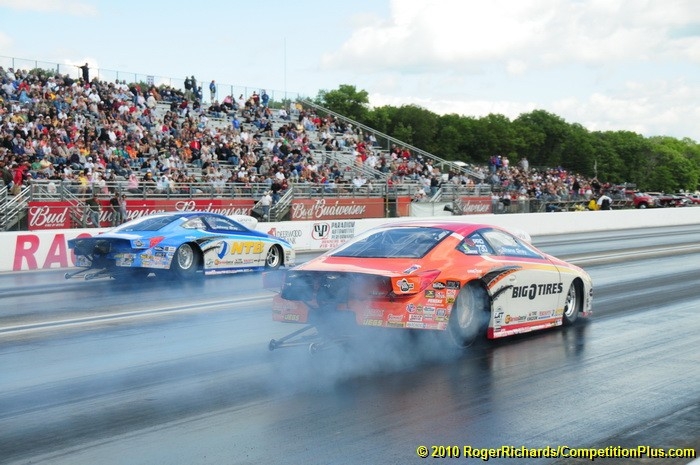 There are several pieces of the Pro Stock puzzle drivers and owners must put together to have success in this highly-competitive NHRA class. One major decision that has to be made is whether a team wants to lease motors or start its own in-house engine program.

The latter seems to be a popular choice of late; but it is not a simple transition to put an in-house engine program in place. It is even tougher to put one in place which produces results.

“I think you really need a two-car deal to do a good engine program, unless you have unlimited funds like say Johnny Gray has got to throw at it,” said Larry Morgan, who has been competing in Pro Stock since 1987. “I do not think a single-car team can do an engine program unless they’re pretty well set up with someone who does cylinder heads and is an engine builder.

There are several pieces of the Pro Stock puzzle drivers and owners must put together to have success in this highly-competitive NHRA class. One major decision that has to be made is whether a team wants to lease motors or start its own in-house engine program. 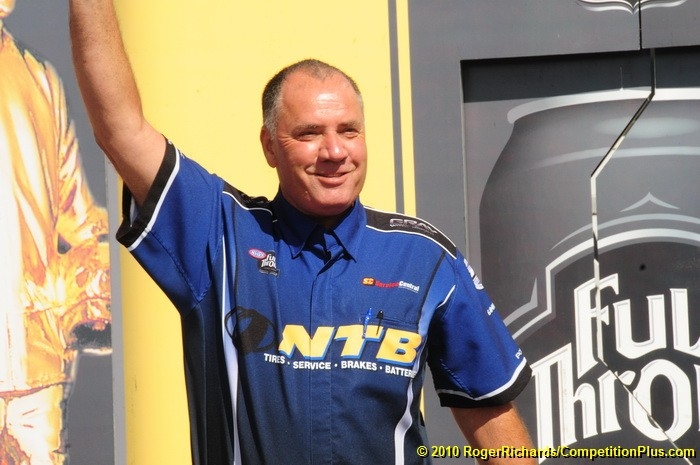 Johnny Gray embarked on an in-house engine program this season. He believes this kind of commitment sends a strong message to sponsors.

The latter seems to be a popular choice of late; but it is not a simple transition to put an in-house engine program in place. It is even tougher to put one in place which produces results.

“I think you really need a two-car deal to do a good engine program, unless you have unlimited funds like say Johnny Gray has got to throw at it,” said Larry Morgan, who has been competing in Pro Stock since 1987. “I do not think a single-car team can do an engine program unless they’re pretty well set up with someone who does cylinder heads and is an engine builder.

Morgan knows what he is talking about. He rattled off a list of guys like Tom Hammonds, Ron Krisher, and Mike Thomas who have attempted to run their own in-house engine programs and failed, to prove his point.

“A lot of guys have tried it (in-house engine programs), but they have to have someone behind it who is pretty motivated and if you do not have that, it is not going to work,” Morgan explained.

“When Greg Anderson hired a NASCAR guy in Joe Hornick to come in and help them, they got their engine program going,” Morgan said. “Then, Hornick was hired by Victor Cagnazzi and all the guys who worked with Cagnazzi went to work for (Mike) Edwards. All this started with Joe Hornick. He knows what it takes to run a good engine program. The guy has a lot of knowledge and that’s where it all started.” 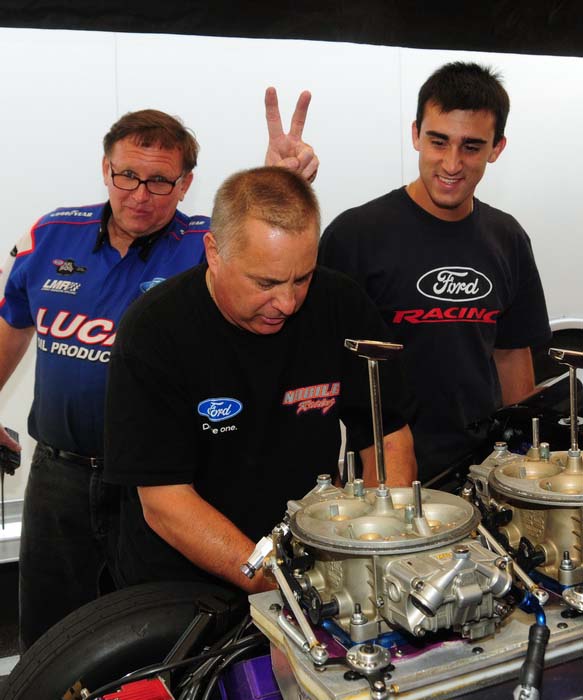 Larry Morgan, in the background jokling with  John Nobile, believes leasing motors is only a viable option for some drivers for financial reasons. A good engine lease program can cost upwards of $700,000 per season.

Presently, Morgan is in his first season driving the Lucas Oil Ford Mustang and running his own in-house engine program, without the benefit of a teammate. He is 16th in the point standings.

Morgan would love to find just the right teammate.

“I’m looking for a guy who has enough money to do it (run an in-house engine program) to team up with me,” Morgan admitted. “They could team up with me and I would give them whatever motor they want. A lot of guys think, well, they only have one engine and that’s not true. I’ve been qualifying and doing OK, but to do it right I need to spend more money that I do not have. I just have to do the best I can do with what I’ve got.”

Having a second team as part of the engine program isn't the only key to success. You also need the right guy doing the building.

Hornick, who is considered one of the right guys, is currently the head engine builder for Johnny Gray at the Gray Motorsports engine shop in Denver, N.C. Johnny and his son Shane have been outstanding this year in Pro Stock.

This is Shane Gray's rookie Pro Stock season and he is sixth in the point chase while his father, Johnny, is ninth.

“We’re real excited about where the program has gone,” Johnny said. “We have had competitive cars that with a little bit of luck and if the driver is on his game that day, have the capability of winning a race. We also feel like our program has a lot of room left to grow.”

During the 2008 and 2009 seasons, Johnny ran a Dodge Stratus and leased motors from Roy Johnson, but felt like this season it was time for him to go his own way to make horsepower at Gray Motorsports for he and his son. 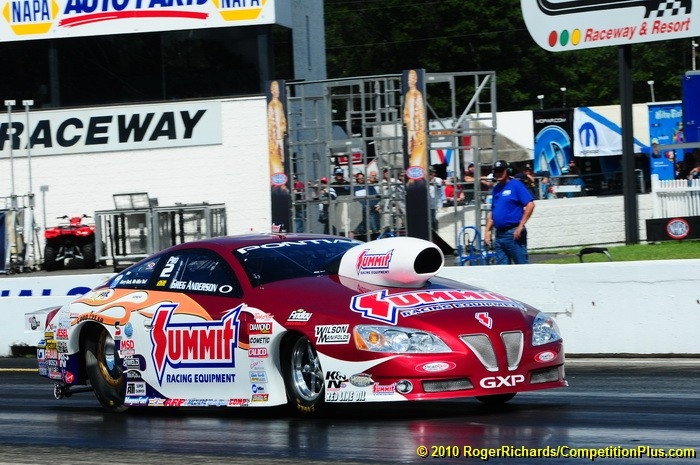 Many believe it was the initial commitment and success of an in-house engine program exhibited by Greg Anderson which led many teams in the direction of building their own engines. When Anderson and KB Racing embarked on their program, roughly half of the competitors in Pro Stock leased engines.

“I’m not aware of anybody who has ever been successful leasing motors from somebody they are racing against,” Johnny said. “Jeg (Coughlin) leases motors, but Jeg ain’t racing against Cagnazzi, you know what I mean? When you’re leasing motors against somebody you are fixing to race, it just creates all kinds of complications. We tried it (leasing motors) for a couple of years and we just were not having any success at all.”

Morgan thinks leasing motors is only a viable option for some drivers for financial reasons.

“Guys started leasing motors because they figured out they couldn’t spend $100,000 to run Pro Stock,” Morgan said. “You can lease an engine for $30,000 a race and I know that sounds like a lot of money. But, you also have to take care of the engine, and the wear and tear and keep it from blowing up, because there are a lot of guys who are not capable of driving who try to run Pro Stock.

“A good lease program cost about $700,000 a year. I spend $1 million a year to do what I do (with an in-house engine program) and I’ve tried cutting everywhere you can cut and that’s just how much it is. If you want to qualify and run Pro Stock, you’re going to have to spend $1 million a year. You can think you can do it cheaper than that, but you can’t. To run all the races, and have a team, it cost $1 million a year, minimum.”

One piece of the puzzle which became clear to Gray was how much easier it was to find sponsors once he made the commitment to an in-house engine program. 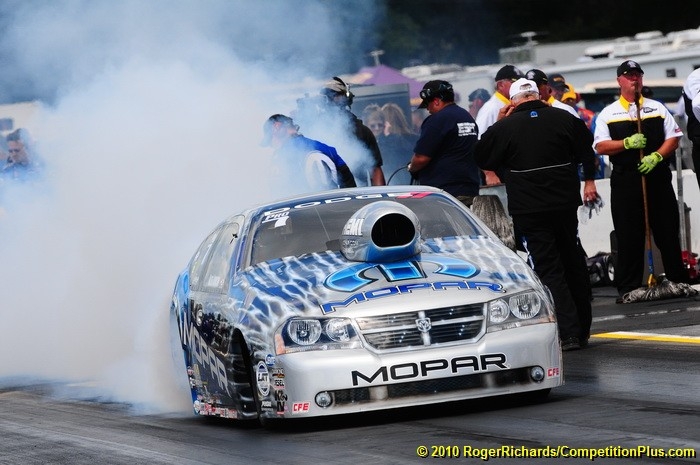 Allen Johnson, and father Roy Johnson, headline Mopar's engine building efforts and also carry one engine lease client.
“We learned that sponsors will not take you serious if you do not make the commitment to them that you are serious,” Johnny said. “In other words, if you are renting motors, they realize this guy has the ability to just walk out any time he wants to. He’s not serious and he hasn’t made a commitment to this program, so why would we want to make a commitment to him. When I made the commitment to run our own in-house engine program, I was approached by the Tire Kingdom and NTB people because if we were going to do something like this, they wanted to come in on the ground floor. Running our own program opened the door of opportunity for sponsorship for us.”

Once you start your own engine program, the next logical step is to lease motors.

Morgan says he is not leasing any motors to Pro Stock drivers even though running an in-house engine program is not cheap.

“To have a good engine program you have to spend $1.5 million a year minimum, and there are not many people who are willing to do that,” Morgan said. “Plus, there’s a lot more to racing than just spending the money to do it.”

Gray said he has people who want to lease motors from him right now, but that isn’t something he is willing to do anytime soon.

“If I ever was to lease a motor, it would be with the understanding that if my car ran good this weekend, and your car didn’t, then when we go to the next race I will take the motor, headers and carburetors out of your car and put them in my car and you can run the ones that I ran at the previous race,” Gray said. “I will not go get another motor out from under the bench or I will not change the carburetors. I’m just not ready to make the commitment at this time to start leasing motors. I have been there and I do not want to treat anybody how I was treated.”

Despite not wanting to lease motors on the NHRA circuit, Gray revealed he is  exploring the option of building motors for teams in other forms of racing. 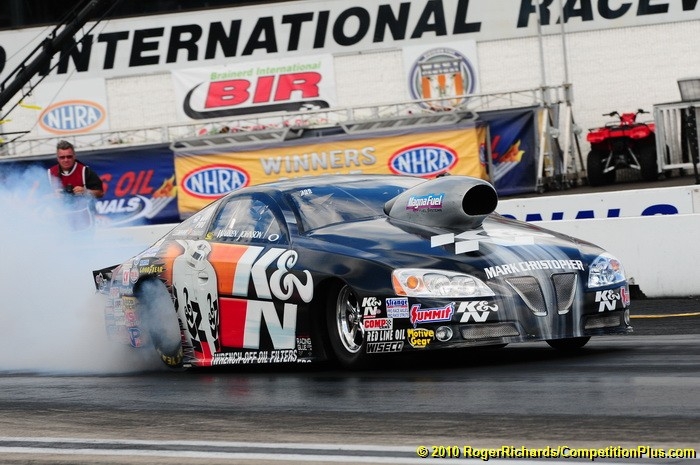 Warren Johnson comes from an era where those who built their engines were always at an advantage over those who purchased horsepower.

“At the present time, we’re working with some people on the possibility of building some circle track motors for a couple of different classes, dirt and asphalt, in the North Carolina area,” Gray said. “We actually have three Comp eliminator motors in the shop that we’re messing with right now. We’re also building a motorcycle chassis in the shop as well. You have to figure out a way to make it a viable business. Nobody wants to just continue to throw money away. You have to figure out some kind of program and set up a set of goals to ultimately make this become a viable business.”