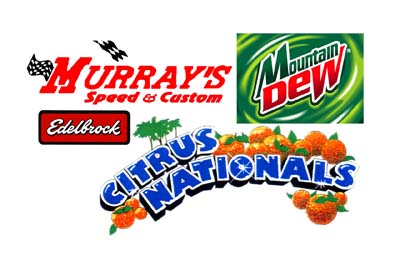 Fuel Funny Cars, which return to Moroso Motorsports Park as the feature attraction at this week's 25th Anniversary Murray's Speed & Custom Mountain Dew Citrus Nationals, are funny only in the most perverse way; strange funny, not comical funny.

After all, what's funny about zero-to-320 mile-an-hour acceleration in less than five seconds; about G forces to which only fighter pilots and astronauts can relate? That's five G's on acceleration, which pins the driver against the seat like liftoff at Cape Canaveral, and five negative G's seconds later when the braking parachutes deploy.

Those first cars, with their bizarre modifications, looked "funny."  The name stuck. Today, though, anyone who knows anything about racing knows that the only thing funny is the name.  They're among the most powerful cars on the planet, 8,000 horsepower hybrids most closely associated with John Force, the A&E TV star who two weeks ago won his 14th NHRA Funny Car championship.

Once a staple at the Citrus Nationals, where Raymond Beadle and the Blue Max reigned in the 1970s and 1980s, the Funny Cars return this week in the capable hands of transplanted Canadian Jeff Arend, a national event winner in the NHRA series, and second generation driver Mike Smith of Boynton Beach, a national winner in the rival IHRA series.

Born in Toronto Ontario, Canada, Jeff Arend brings over 27 years of racing experience. Arend carries fond memories of Moroso, as this is where he earned his Nitro Funny Car license back in 1994 while setting a new track record in the process. Fast off the tree, he has beaten racers like Dean Scuza, Del Worsham and Tony Pedregon at the lights during his first ever-national event. Arend’s best career run was in 2005 when he ran an E.T. of 4.792 at 322.19mph in Englishtown, NJ. He will be competing against Mike Smith.

Mike Smith, a local racer out of Boynton Beach, FL is a familiar face on Moroso’s ¼ mile. Mike literally grew up on the strip with his father, Paul, as a mentor. After earning his Top Fuel license in 1998, he scored his first-ever career national event win at the 1992 IHRA Summer Nationals in Canada. His best run was an E.T. of 4.669 at a top speed of 318.17mph. Paul will be switching gears as he seats himself in his father’s Funny Car to compete against Arend. This will mark the return of fresh nitro in the air at Moroso in over fifteen years.

This weekend’s event is the celebration of the 25th Anniversary Murray’s Speed & Custom Mountain Dew Citrus Nationals, as it finishes out the Thanksgiving Day weekend with two days of solid speed and earthshaking racing in front of over 36,000 die-hard race fans. Adding to the hit list of entertainment will be a full lineup of exhibition vehicles including: the triple engine Jet Truck “Shockwave”, two jet funny cars, two jet dragsters and two wheelstanders. Race classes feature 5-second Top Alcohol Dragsters and a plethora of bracket classes like the JW Performance Super Street and Super Comp.

Another rarity will be found for this celebration. The first and last Top Fuel Dragsters driven by national champion Darrell Gwynn, of Miami, will be on display from his private collection. In 1985 Darrell tested and raced his first Top Fueler at Moroso Motorsports Park.  This digger has been completely restored along with the last dragster he drove before his accident in 1990, the famous “Coors Extra Gold Special” dragster.  The “Coors” car is on loan from the Don Garlits Museum of Drag Racing in honor of the 25th Anniversary of the Murray’s Speed & Custom Mountain Dew Citrus Nationals. This particular dragster has set 3 NHRA National records with an E.T. as low as 4.909 (1990) and 5 national event wins. At the 1989 U.S. Nationals, this car made history by qualifying #1 with an E.T. of 4.981, winning the race; setting a national record and becoming the 7th member of the 4-second club. This was also the car in which Darrell and Big Daddy battled many competitions on the track as the “old man and the kid” conducted a serious rivalry across America.

Although no longer racing, Darrell keeps a high profile in the sport that he loves, while being a leading force to help find a cure for spinal cord injuries. The Darrell Gwynn Foundation (DGF) was created to help aid that critical research by raising funds.

Gates open for the Murray’s Mountain Dew Citrus Nationals at 8:30am both Saturday and Sunday (November 25-26th).  Saturday, Time Trials begin promptly at 9am with the Seminole Tribe Quick 16 Qualifying at 10:30am & 12:30pm.  The ET Eliminations will proceed at 3:30pm with Quick 16 Eliminations at 5:30pm.  Top Alcohol Dragsters will qualify at 6pm and again at 8:30pm.  Exhibition vehicles, including the 36,000 hp Jet Truck, will light up the track at 6:30pm and at 9:30pm.  Sunday, November 26th, racers will receive one Time Trial starting at 9am.  NHRA Eliminations kick off at 12:30pm followed by the ET Classes.  Jets and Exhibition are scheduled to make passes at 2:30pm and then their final run at 4:30pm.

Spectator tickets are $25 for 1-Day or $40 for 2-Days while kids 11 and under are FREE.  Advanced discount 1-day ($3 off) spectator tickets are available at Kentucky Fried Chicken locations throughout Palm Beach County and include a FREE 2-liter Pepsi or Mountain Dew.  Murray’s Speed & Custom stores in Stuart, West Palm Beach, Boynton Beach, Pompano, Kendall and North Miami also have discount tickets. Children 11 and under are free.  For more information, please call the track office at (561) 622-1400 or visit the website at http://www.morosomotorsportspark.com/