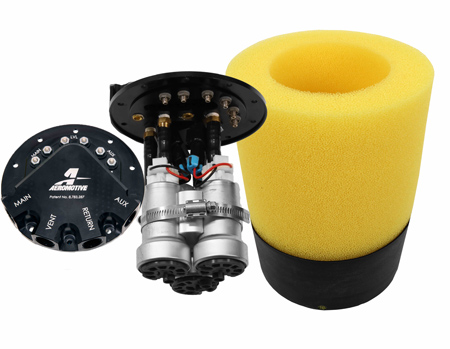 When the fuel delivery experts at Aeromotive Inc. started getting requests for custom fuel pump designs for unique street truck builds, they began formulating a plan for a new product category. Then, when those requests came in from the guys over at Street Outlaws, they knew those new products would need to handle even the highest horsepower demands.

Aeromotive’s new line of truck fuel Pumps is now available for pre-sell, with nine part numbers for late-model Chevrolet/GMC pickups, including 1999-2004 and 2005-’18 applications. Based on the company’s proven Phantom Fuel System kits that include everything needed to install a fuel pump and baffle/basket into almost any fuel tank, they are ideal for LS-based Bowtie street truck builds that include power-adders such as turbos or superchargers.

“We had people calling us who were working on Silverados and Sierras, looking to make upwards of 800 hp, and until now there hasn’t been a real solution to offer a pump for these LS-equipped trucks,” said Matt Brewer of Aeromotive. “People were actually sending in tanks to show us their handmade modifications, because they were running out of fuel due to limitations of line sizes of the pump or the basket itself not being large enough to handle the amount of fuel needed to feed the system.”

Modifying the Phantom technology, the new truck Pumps line fits factory fuel tanks and can be installed in about two hours after the tank is dropped. The new systems can handle roughly twice the horsepower demands of stock fuel pumps.

Notably, one of the first new pump designs went to Shawn Ellington (better known as Murder Nova) of Street Outlaws.

“He came to us because he had a TrailBlazer that was going to make somewhere in the neighborhood of 1,200-1,300 hp,” Brewer said. “We came up with a custom setup that sparked some interest on the internet.”

That led to Ryan Martin, also from Street Outlaws, reaching out about a couple of Silverados he was building.

“So, we did two for him,” Brewer noted. “They were a multiple intake pump configuration, which we are coming out with now.”

Known for its innovative products developed in response to customer demands, Aeromotive is happy to be branching into the truck/SUV market after years of sustained success in the traditional performance/racing world.

Go behind the scenes with Scott Palmer, driver of the Magic Dry Top Fuel Dragster at the greatest drag race in the world - the NHRA U.S. Nationals in Indianapolis. - https://t.co/0bRsXb8cMU pic.twitter.com/40sld9yNWP