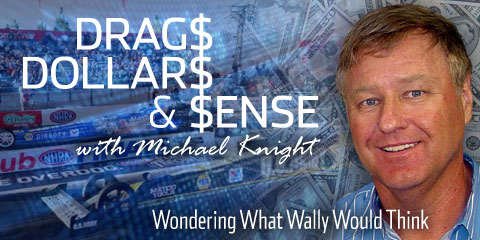 I always look forward to Michael's column, and the title and first two paragraphs led me to believe that once again I would be in for a treat.

Was it respect for Wally, or fear of Wally?

And just maybe if the competitors "back in the day" stood up to Mr. Parks when his decisions went against their best interests, NHRA Championship Drag Racing wouldn't be facing these difficulties to the degree that it does now. - Bill Swanson 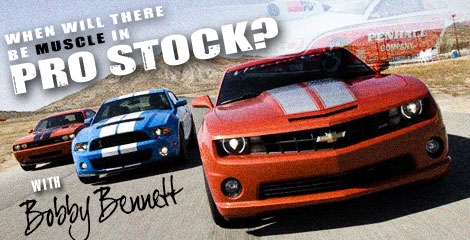 FEEDBACK FRIDAY – FROM THE MISC. FOLDER

BIG JIM'S A LEGEND, WHAT ABOUT GARY?

FEEDBACK FRIDAY – DRAGS, DOLLARS & SENSE: IT'S THE JOHN FORCE SHOW, AND RIGHTFULLY SO

FEEDBACK ARTICLE – DRAGS, DOLLARS & SENSE: IT'S THE JOHN FORCE SHOW, AND RIGHTFULLY SO

If Michael Knights' article about John Force and Drag racing is even half correct, then the NHRA must be on Life support!  Last time I checked the NHRA telecasts garner maybe a 0.6-0.8 share, and this is with 30 minutes of Force every week!  How bad would the ratings be if Force wasn't there? Someone ask Mr. Knight how it is Pinks All Out gets much higher ratings then NHRA does, not to mention crowds! - Joe Sherwood

FEEDBACK FRIDAY – THE RIVALRY TO END ALL RIVALRIES - BIG AND SHIRLEY

FEEDBACK ARTICLE: THE RIVALRY TO END ALL RIVALRIES - BIG AND SHIRLEY 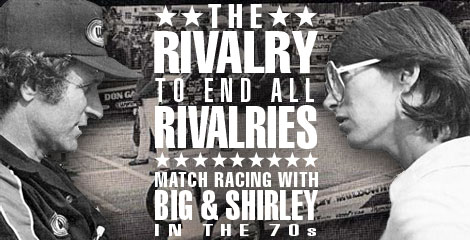 I ran Top Fuel as part of Lou Novotny's crew in the '70s and early '80s and there is nothing in motorsports that tops this rivalry...not even the Snake and
Mongoose. Garlits kept "score" on that old Chapparall's door...and yes he won more of the races than Shirley...but not by much...the intensity in their pits
was "electric" with T.C and than Herb Parks crewing for Big and at times Connie and than Ron for Shirley.

You had to be there...intense excitement and competition.- Greg Fedak 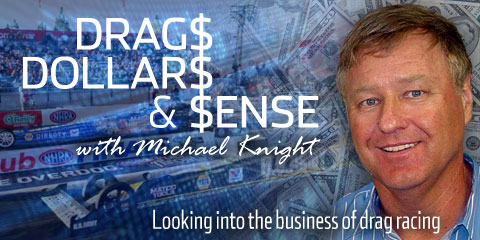 Thank you for Drags, Dollars and Sense. I would be very interested in this column. You see, I live in Wisconsin, and so I would make the races at the track that was formally known as the Milwaukee Mile. That track will now sit idle. No one has been able to explain the money trail. NASCAR is still owed over a million dollars, the IRL is owed money, and former promoter doesn't have the money to pay them. So ya, it would interesting to find out where the money goes.

We fans are paying a premium price to see professional teams compete, but then we get hosed from the management types. Also, as a fan, anything I can do or learn that could convince sponsors that there is value in motorsports marketing would be helpful. Not only for drag racing but motorsports in general.  I look forward to this colum. - Gregory Zank 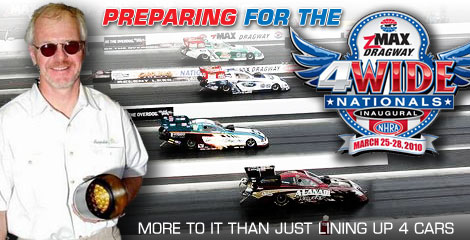 Fonzie has officially jumped the shark at NHRA. While I think running exhibitions or even qualifying would be acceptable. Racing eliminations under this format  is crazy. - Mike Greene

I am disgusted, I thought it bad enought that the NHRA was trying to copycat NASCAR. But now they are aspiring to better Barnum & Bailey. Leave 4 wide for Stock and Super Stock. - Joe Damico

As far as 4-wide racing is concerned, the only benefit will be to the TV people (shortening the length of the telecast on Sundays).  To the people actually attending an event, it means only 3 rounds of eliminations to watch instead of 4, and less bang for the buck (if not more noise).  I am against 4-wide, and against the whole idea of a "countdown" at the end of the season.  -  Andy Nelson 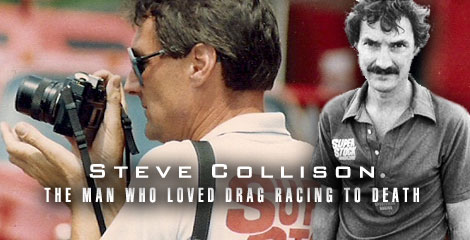 How true, how true, and how many times I have seen Stevie's pea head somewhere in the pits or on the starting line, shooting.

When one or more of my cats would die, I would dream about them for a year or so later. I'd say, "You're alive. You're alive." Same with my mother and father. And the same with Steve. I still dream about him to this day. The frequency isn't the same, but he's still there. I told Cathy that once. I told her that Steve was right there the night before, and he's okay. I called her once to tell her that.

How different things would have been if he had lived. I'm sorry it was me who heard his last breath. And for the first time I now know whose photo he was looking for --- Malinda.

Dear God, I miss him so. - Dale Wilson

FEEDBACK FRIDAY – FROM THE MISC. FOLDER

If the Full Throttle Trophy is supposed to be crowning a champion for the season ( And I believe that is what the trophy says "2009 Full Throttle Championship") then why is it just a representation of just the last 5 races?

How bout having Miller, or Budweiser, maybe Coors kicking in after Indy for this final run for the "Championship lite trophy" - hear me out!

I think this year with HeightProck nailing it the last 5 races, but sucking in the previous 18 races, can't help but leave an astrix next to his championship (
I doubt that he is totally happy with how it all played out, you can see it in his face.) The year before we were all robbed of the chance to see Tim Wilkerson crowned with the championship that he and his team had as underdogs had very obviously earned throughout the entire season. We the fans felt even closer to Tim because along with him we were "all" denied the "Cinderella season", Hollywood ending drama only because of the countdown. I feel sorry for Cruz Pedregon for the "Yeah But" that follows the mention of his 2008 Championship - Yeah but if it wasn't for the countdown we all know Wilkerson was the run away Funny Car Champ that year!

It's how us fans perceive it all anyway! Might as well do both! - Tim Hart

FEEDBACK FRIDAY – FROM THE GRANDSTANDS: OF SENSORY OVERLOAD 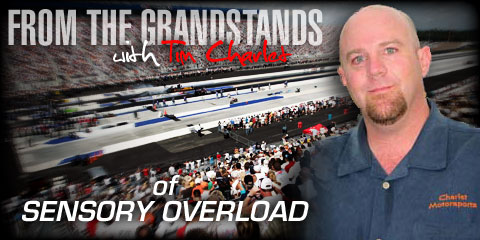 FEEDBACK ARTICLE: FROM THE GRANDSTANDS: OF SENSORY OVERLOAD

I thank the Sargent for his service, as a retired sailor from the Amphibious Navy I also salute him. This was agreat story.  I hope many will read it. It is very encouraging! - Jack W. Smith