It’s no secret that new NHRA president Peter Clifford inherited a litany of problems that for years were ignored in the apparent hope that they would fix themselves.

As a result, at his first press conference, he identified six initiatives he wants to address during his presidency.  Not unexpectedly, his No. 1 priority was NOT doing away with 1,000 foot racing.  It was putting in place a workable TV package.

BOBBY BENNETT: PETER CLIFFORD, IT’S ALL ON YOU BRO

Two weeks into his administration, he's made two key moves which have done just what the NHRA needed.

Right now it looks all good on paper and computer screens.

Kudos to new NHRA president Peter Clifford for making his first big decision a universally positive one.  NHRA’s hiring this week of writer, columnist and commentator Terry Blount as its new vice-president of Communications and Public Relations was a huge step forward for the sanctioning body and the sport.

That said, it’s not a move that immediately will restore any of the credibility lost in the debacle of the previous four months when no one, at least no one in a position of authority, saw fit to provide racers, fans, the media or anyone else an explanation for the extended absence of the company’s then president, Tom Compton. 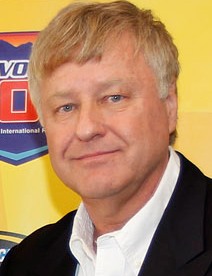 Sometimes, old sayings have the advantage of actually being true.

“You only have one chance to make a good first impression.”

I’m pretty sure Dallas Gardner and Peter Clifford have heard it. I’m absolutely sure they don’t understand it.

DAVE DENSMORE SPEAKS (COMMENTARY): ABOUT AS TRANSPARENT AS A BLOCK OF GRANITE

The NHRA once again has proved that in this era of transparency, it’s about as transparent as a block of granite.

After being MIA for four months, Tom Compton suddenly emerged to announce his retirement and there was no attempt on the part of the NHRA to provide any sort of explanation. According to the NHRA, all of us were told just as soon as they heard the news from Tom. So, apparently, Tom talked to no one for 120 days. Yeah, right.

These, of course, are the same people who later this year will wonder why the media continues to ignore our sport. Duh!

UP FRONT (COMMENTARY): A RUDDERLESS SHIP

NHRA president Tom Compton hasn’t been seen in public since the week following the Gatornationals. In the midst of all the speculation, which had been taking place largely in the background, another web site posted an article claiming to be an accurate depiction of what’s been going on. I won’t comment on the veracity of that article because I don’t honestly know what’s true and what’s mere speculation. But I do know this. The National Hot Rod Association’s mishandling of this situation is more than astonishing. It’s one more egregious example of their arrogance (“Only we know what’s best for drag racing.”) as well as their total lack of understanding of how things work in the modern corporate and media worlds.

If Mr. Compton is suffering from a debilitating illness, if a family member is dealing with a major crisis, or even if, as has been claimed by some who swear they know the truth, that he’s dealing with problems that can only be solved through extended care in a specialized facility, NHRA needs to publicly say so, in detail.

In the name of entertainment, the cable-TV show "Street Outlaws" on the Discovery Channel has done no better than the local TV news stations that report reckless illegal street racing accidents as "drag racing" crashes.

Both have misrepresented the legitimate sport, the news babblers out of ignorance and the Discovery Channel manipulators out of ego, greed, and storytelling license.

However, the National Hot Rod Association also has missed a golden opportunity. Perhaps NHRA officials have missed it for the same reason "Street Outlaws" producers and participating NHRA member racers have ignited the controversy: the NHRA has been a poor judge of how to attract a crowd and a TV audience.

BOBBY BENNETT: THE TITANIC DIDN'T ADJUST AND SEE WHAT HAPPENED ...

Will the NHRA avoid the icebergs which threaten to sink the ship?

The Titanic was a grand ship, built to the nines and more than ready to conquer the rough waters of the Atlantic Ocean. Even Captain John Edward Smith was alleged to have proclaimed, "Even God himself couldn't sink the Titanic."

While history confirms the Titanic ignored at least 30 warnings as it steamed from Ireland en route to the United States, one must wonder if NHRA executives will do the same.