Salinas dancing? Schumacher prefers dragsters. The NHRA has rules, and Ron Capps has someone to look up to.

OK, JUST ONE DANCE – The sun had set on the desert, and the glare of TV cameras no longer had trapped Top Fuel winner Mike Salinas in what he would call his most uncomfortable situation. Blathering in front of media members never has been the intensely driven Bay Area businessman’s cup of Folgers. Neither is showing his vulnerable side. Don’t you know? He’s a tough drag racer and nose-to-the-grindstone businessman, and don’t forget it.

Salinas, nothing like emotional Terry McMillen when the Amalie Oil Dragster driver finally broke into the ranks of NHRA Top Fuel winners at Las Vegas in October 2017, told reporters after his Denso Spark Plugs Four-Wide Nationals victory Sunday, “I’m going to go home and cry by myself.”

But he allowed himself some frivolity – after the crowd had cleared out of The Strip at Las Vegas Motor Speedway. He and his wife and daughters and anyone who cared to join in had a conga-line dance snaking through his Scrappers Racing pit.

So Salinas knows how to have a little fun. His definition of it might not include dancing, though.

“If you put in the work, you’re going to do well,” he said. “My girls put in the work. The next couple years, you guys will see. Everybody is watching what we’re building and what’s growing. The girls are going to be great. Jasmine [who reached the semifinals Sunday in the Top Alcohol Dragster class] is going to be an amazing Top Fuel driver. And I believe Jianna [who competed in her second Pro Stock Motorcycle race at Las Vegas] is going to jump in a Top Fuel car also. All the girls are going to have an opportunity to do it. I think it’s going to be fun.”

It will be something like the NHRA hasn’t seen in its marquee class, this program that perks up Salinas more than his own early success, or as he puts it “what we’ve got coming.”

Salinas said of tuning shaman Alan Johnson, “The nice part is he’s already looking forward to Jasmine out there. So we’re already working on this stuff. Her car will start being built in probably two months. We’re going to start building her team and get ready and try to ease her in when she’s ready. She will get her license this year. She will get her license, but it’s going to be her choice, not mine.” 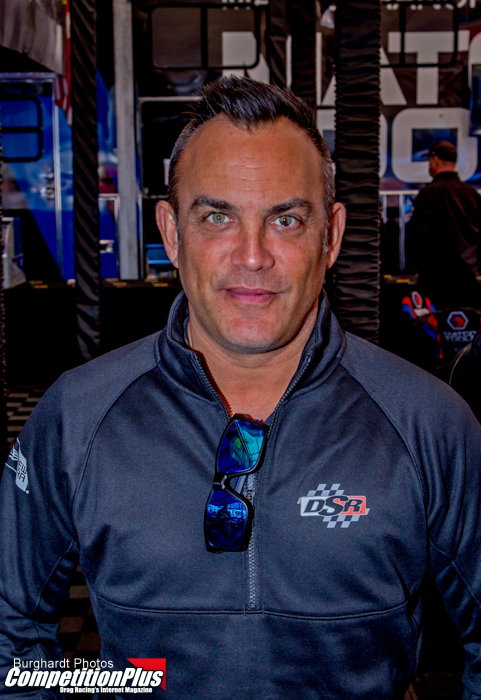 PREFERS DRAGSTERS STILL – Tony Schumacher, idle while he and Don Schumacher Racing representatives land him a marketing partner for his dragster that carried the U.S. Army banner for 19 seasons, provided commentary Sunday in the public-address announcer’s booth and on FOX Sports TV with Brian Lohnes and Tony Pedregon. And announcer Alan Reinhart asked Schumacher if he finds a suitable sponsor and is able to return to the track what he would do if that potential benefactor said they wanted him to drive a Funny Car.

Without hesitation, Schumacher said, “I started in Alcohol Funny Car. I hope it’s a dragster, because I made my life in a Top Fuel car, and I want the records to continue in a Top Fuel car. I want every challenge. I want to break those bars. But if it came down to it and they said, ‘Here’s a Funny Car. Go drive it,’ the problem with that is we have four Funny Cars [at DSR]. The rules state you can only have four. Hopefully somebody out there with the right group wants a Top Fuel car. We can talk. We’re pretty easy to get hold of.”

He conceded he’s not afraid to drive a Funny Car, and Rinehart reminded him he wouldn’t be the class leader in that class like he is in Top Fuel with his eight series championships and 84 victories. Force, who is on the verge of earning his NHRA-record 150th  event trophy, has 16 titles.

Jabbed Reinhart, “How many championships does he [Force] have?”

“More than me,” Schumacher said.

Schumacher replied, “I’m half his age, too.”

(Fact check: Force will turn 70 May 5. Schumacher will be 50 Christmas Day. But it still was a funny line.) 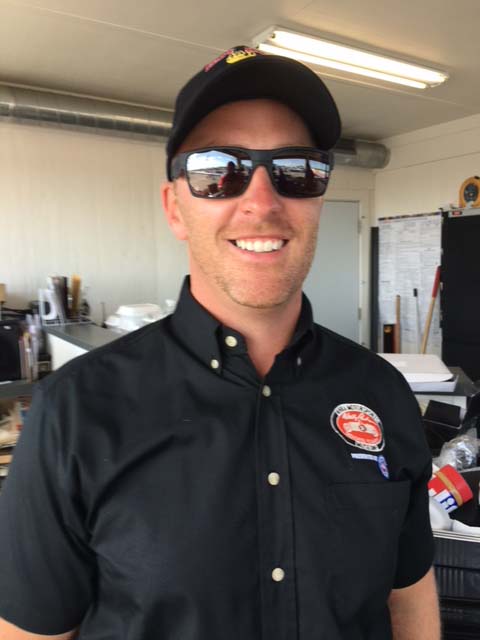 PETERSON ADDRESSES NHRA REPORTING PROCESSES – According to a statement the NHRA released Sunday afternoon, the Safety Safari worker injured and hospitalized following a scary moment in the shutdown area during Pro Stock qualifying Saturday is expected to recover fully from her undisclosed injuries. She remained in the hospital “for further evaluation” as of Sunday morning, Josh Peterson, senior vice-president of racing operations, said.

Competition Plus has known since Saturday afternoon the identity of the woman but out of respect for her and her family’s privacy is not publishing her name. Peterson did confirm that the woman is a part-time Safety Safari staffer who “has been around the sport for a very long time” and that her husband is a full-timer.

“They were not on the racing surface. They were in the shutdown. Each [Safety Safari] truck has three people in the back and two in the front, the driver and the passenger. Here [at this first Las Vegas race of the season], we have double that in all the positions because of the four-wide. So naturally, we have double the Safety Safari staff. So it might come across that there’s a lot of people. But each truck has three and two. In this scenario, there was a car that needed to be pushed off because it had stopped. One of our top-end directors was pushing the car and he needed some help. So yes, they will come out and help after things have stopped on the racetrack. The direction comes from the top-end director holding the flags. You see them hold up the flags to stop, turn, etc. They’ve got signals the drivers know. So they’re the ones that are directing the cars where to go, where to stop. Our staff from the truck was coming out to help him another car that had stopped. I think it was in Lane 3. That’s not uncommon. Our staff will do that. You saw [in the video] the yellow jackets. That’s where they came from. You have the sand trap [monitors] and you have [normally one truck sitting to the outside of the turnout lane].”

Peterson characterized the incident as “a freak accident” and “just unfortunate circumstances.” He said, “It’s no matter who the family member is. We’re all family out here in one shape or another. We hate to see anything happen to anybody.”

He acknowledged the NHRA might seem to the general audience to be uncompassionate in such circumstances where an individual is injured or even killed (such as in the case of sportsman racer Randy Alexander at Atlanta Dragway nearly a year ago).

“There are certain things that we have to go through, and the first and foremost is HIPAA,” Peterson said, referring to the Health Insurance Portability and Accountability Act. The U.S. Health and Human Services Department adopted the measure in 1996 to develop regulations that protect the privacy and security of certain health information.

“There’s nothing we can do about that,” he said. “We can’t release any information until we’re given the OK from a family member to do such. Let the family members get the other family members notified. I think it’s only fair that they have the ability to do that. If they have done that and they’re OK with us doing a release, then so be it. We will. But I think anybody would want to have that done one-on-one versus hearing it broadcast or in a press release. Maybe it does make it, from the outside looking in, like maybe we’re not [caring], but we want to follow that policy and give that respect to that person, whether it’s one of our own or a driver, whoever.”

As for the Alexander case last May, Peterson said, “If I’m not mistaken, we covered that in the Lucas Oil [Series] show. I can’t say for certain. I’d have to go back and look.

“I don’t think we hide from it. I think we’ve been as open and transparent as we can be. We just have to respect our process and the family members involved and everything that goes into it, not only from making sure that our people know what’s going on, sort of getting everybody in tune. I think it’s only fair that that process is followed, whether it’s by law or a family member notifying other family members before it goes out from us. That doesn’t sit right with us that we send out this press release if [s family member] doesn’t know what happened to [a loved one] at the racetrack. If he hears about it in a press release, he’s not going to be very happy about that. It takes time. Family members aren’t always necessarily there. You have to go through that process. We want to respect that process and respect the people who have been affected, from the injured party to the family member who is waiting to hear what happened,” he said.

“First and foremost, the last thing we want to do is reach out to that person who is emotionally distressed and say, ‘Are you OK with us putting a statement out?’ That’s the last thing on their mind. All they care about is ‘What happened to my relative?’ And that varies from person to person. Somebody might be able to say, ‘Yeah, go ahead.’

“Hopefully it doesn’t come across that we’re being insensitive, that we don’t care. We really do,” Peterson said. “Unfortunately, when these situations happen, no matter what the severity of it is, we just have to follow the process but we’ve got to recognize those who are affected and how hard you can and cannot push.”

The advent of the Internet and social media undeniably has complicated the process. Individuals with cell phones or cameras film whatever they want to and aren’t concerned about the consequences or whether posting the images or videos online is judicious.

“That’s happened many times,” Peterson said. “Stuff starts coming out on social media. You [Competition Plus] and others come to us and say, ‘This is what it says.’ But per HIPAAA, we don’t have any ability to release anything because we don’t [permission] from a family member or that particular person to say, ‘Yes, go ahead and say XYZ.’ Got to respect the law. Our hands are tied. They really are. Legally our hands are tied in what we can say, how we can say it, and when we can say it.

“I would feel much more comfortable knowing the immediate family member was notified one on one, whether it was done by me or another family member, versus our department sending out a notice [and they learn the situation from that]. I don’t want to accept that phone call. I don’t want to have to make the phone call, but I sure as heck don’t want to accept that phone call because we didn’t follow a process or respect those persons who were injured,” he said. “We’re right on top of the scene, and we know what’s going on. But our hands are tied.”

It’s nearly impossible to halt the flow of information, and it’s debatable whether that even should happen. But Peterson said he knows it’s a matter the NHRA needs to address or at least examine.

“I think nowadays, whether it’s on All Access or not, [people will know]. There are cameras everywhere,” Peterson said.

Technology, which is helpful and educational and all-around amazing in most instances, has presented this phenomenon that surely will repeat itself and continue to cause problems from multiple angles. But Peterson understandably has his parameters that control his – and the NHRA’s – decisions and actions. But it's clear he understands Competition Plus and other responsible media outlets will continue to seek accurate and fair information.