COMMENTARY: TORRENCE-FERRE SKIRMISH IS WHAT IT IS

Be careful what you ask for because you might just get it. NHRA got what it wanted Sunday, unfortunately in a controversial incident, which, in turn, has left them with a decision to make.

Drag racing’s social media sphere reacted in shock Sunday as then championship contender Steve Torrence took an open palm and pushed Cameron Ferre in the face to the point his head flew back like a Pez dispenser. It was not a punch; it was a shove. However, in legal terms, the shove would be viewed as assault, an arrestable offense. To put things in perspective, grabbing someone by the arm can also be viewed as assault.

To read the social media posts on the subject, one would think this kind of thing had never happened before. No, there wasn’t a full-scale brawl in the pits between two teams back in April 2017. There wasn’t a shoving match between John Force and Tony Pedregon over allegations of cheating at the NHRA U.S. Nationals in 2009. And, in the days before social media, straight out punches never ever happened. Of course, I’m being facetious.

The situation raises questions, and I’m not here to be the judge, jury, and executioner as many have already done in this day and age of social media meted justice.

There was already a tense situation at hand created by NHRA’s manipulation of generated excitement for the Countdown. If this situation had happened, let’s say in Brainerd, I’m confident nary a word would have been said between the parties. There might have been a word said in passing, if that.

When creating a playoff system wasn’t enough to generate excitement, the NHRA added bonus points for qualifying. When championships were being clinched before the final day, a point-and-a-half Finals format was added. The tension was so thick Sunday in Pomona; you could cut it with a chainsaw.

Cameron Ferre wanted to win a race. Steve Torrence wanted to clinch a championship. I get it. And, there’s nothing technically wrong with what Ferre did. But in the rules of championship etiquette, there appears to be an unwritten rule a racer not in the championship hunt is automatically supposed to pull aside (ala NASCAR) and let the championship contender pass on the way to racing the other contenders.

If this is the case, NHRA needs to adjust its drama-filled approach. Maybe it might be time to consider having only Countdown-eligible teams participate at the AAA NHRA Finals, so a contender doesn’t have to battle lapped traffic en route to the meaningful championship. 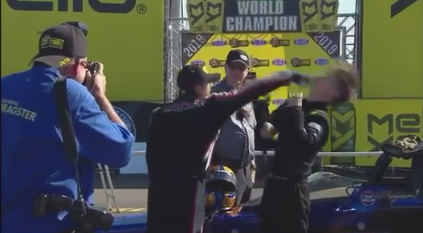 My biggest question out of the whole deal is what was said while the two appeared in serious conversation while shaking hands. We may never know since Torrence will not speak publicly, and Ferre was reportedly put on a gag order by NHRA about speaking publicly about the incident to the media or anyone. Ferre would neither confirm nor deny this.

So we may never be privy to what precipitated the incident. We can only draw conclusions.

“I’ve seen it on the TV and everybody, the whole place here hates me,” Torrence said on Sunday in the media center. “I’m the most hated champion ever probably. But nobody knows what was said. A little heated conversation down there, and it went too far. But I mean, unless you know the whole story and what was said other than just watching it on television, you don’t get it.

“So I went and talked to Cameron just a minute ago and apologized. And I think we have a mutual understanding, and it’s just we’ll leave it at that.”

Then after reading Susan Wade’s Pomona notebook item from the AAA NHRA Finals, I SHOULD DO WHAT?!, creates what a jury would say is reasonable doubt. The Racers in Rental Cars podcast transpired before Las Vegas.

Don O’Neal: “What can you do when you’re a racer, and you’re trying to get your name out there, doing anything and everything . . . You’re basically becoming your own . . . let’s just call it ‘pimp’ for yourself . . . to try to get attention. . . . Seriously, what do you have to do? What can you do? What should you do? Of course, there’s always ‘You shouldn’t grab a driver by the waist and body-slam him to the ground on pit road.’
Cameron Ferré: “I’m thinking about it.”

DO: “Dude, I’m totally thinking if you want to get some serious TV coverage, you get your one and only qualifier that you’ll probably do, get out of the car, and run over and punch whoever it is that’s –

DO: “Just the poor soul who ever ended up being in the performance order to run beside you–”

CF: “Like get down like I know what I’m talking about with football, like I’m in a football stance? With my luck – I’m so little – it’d be like one of the bigger dudes, like Terry McMillen, and I’d just go pffftd and I’d fall over.”

I’m not saying this was what Cameron did, but it does leave doubt hanging in the air that something was said to provoke Torrence. Regardless if it was or not, physical contact, such as what happened, is not justified.

However, I’d be willing to bet dollars to donuts those internet Pharisees who justify violence against Torrence just because he’s as they say, “a spoiled rich punk” if Torrence had said something to them as alleged to have been said by Ferre, there would have been a closed fist punch.

But no one will know if anything was said or not.

In one day, Torrence sealed his place as drag racing’s version of Kyle Busch, also a champion.

There was lots of trash talk going on at the top end including a hot mic on NHRA.tv which picked up a phrase uttered, “You act like a b****, you get treated like a b****”

Later it was said on the broadcast to be  “You act like a child, you get treated like a child.”

NHRA released a statement on their website, no doubt, to quell the groundswell of public demand for action on the matter.

“The NHRA is disappointed in the situation that occurred between Steve Torrence and Cameron Ferre after the first round of Top Fuel competition at the Auto Club NHRA Finals. We are evaluating the matter, and any potential penalties will be assessed after a thorough review.”

Don’t shoot the messenger here, but I am going to offer the letter of the law as based on previous NHRA precedents.

Based on what I saw, Torrence performed an open-faced shove to Ferre’s face. It’s a shove, not a punch. Crewmembers then intervened, so we don't know what might have happened between two unrestrained individuals.

When John Force and Tony Pedregon got into their much-ballyhooed hissy fit at Indy 2009, neither driver got fined for pushing one another. Force got fined for shoving an official.

There is no public evidence anyone was fined for the pit melee, which broke out at the 2017 NHRA Springnationals in Houston, Texas, between the Alex Laughlin and Tanner Gray crews.

Remember the Clay Millican - Doug Herbert fiasco? A talking to, but no fine and there was shoving involved.

Heck, there was even a shoving match in an NHRA Media Center between two members of the media, and there was no disciplinary action handed down.

Ron Capps punched Whit Bazemore in the privacy of the team hauler; he got fined.

So here’s what you should draw from this if you shove a fellow racer - there is no fine or ramification.

If you punch, there’s going to be hell to pay.

As much as I detest this quote, “If the glove doesn’t fit, you must acquit.”

Have fun, NHRA. The racing world is watching you.