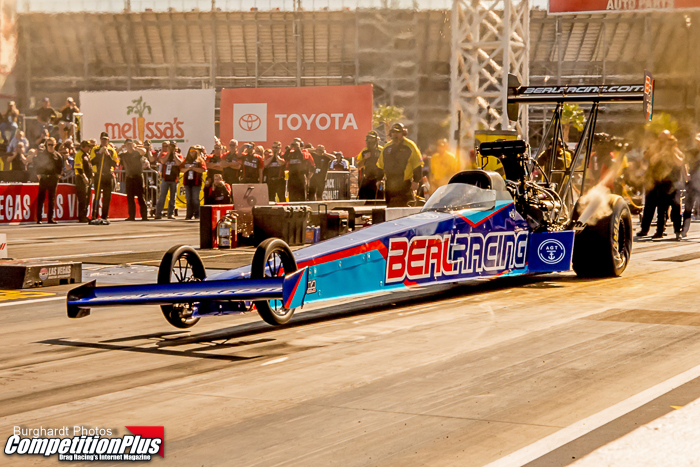 The plan was to make a few aborted runs and maybe if all went well to make a full pass.

But with a twinkle in his eye, Dakin said Friday morning, “The first one is just going to be half-track just to make sure everything works. And then if everything looks good then it’s going to go to the stripe on the next one. Why not? If it looks good the first one, there’s no reason not to."

His big objective is to get a license on Monday. We’ve got to have something that will get him licensed, so that’s what we’re going to do. Might as well try to qualify. I just came out here just to try to get this thing down the track and get it to where he can get his license on Monday. If we qualify, all the better.”

And it was all the better for the Beal Racing team that has taken what it learned from the late Chuck Beal and switched from the Funny Car class to Top Fuel. But the weekend didn’t start out perfectly.

An ignition problem caught them off-guard Friday. So Dakin didn’t get to take the car – which was Richie Crampton’s SealMaster Dragster from last year - down the track until Saturday.

He made the most of his two runs Saturday and qualified the Beal Racing entry in 15th place in the 16-car field with a 3.848-second elapsed time at 275.62 mph. He’ll race No. 2 qualifier Brittany Force in the opening round of eliminations Sunday.

“It’s a good car. It’s a good chassis,” he said. “Scott fixed the deal up for him to buy this car from Kalitta. This thing’s close to our car, not quite 100 percent, but it’s close.”

Graham will continue to work with Dakin primarily but will serve as Welch’s crew chief when the San Diego racer is expected to make his limited-schedule appearances.

“Scott’s going to help them,” Dakin said. “Brandon’s only going to race the West Coast, which doesn’t interfere with us at all.”

Dakin couldn’t resist channeling Funny Car team owner and former driver Jim Head, downplaying the compliment Welch paid him in asking him to test the car: “A monkey can drive these things. All you’ve got to do is step on the gas and pay the bills. That’s the only thing you’ve got to do.”

He said Welch, who co-owns the team with cousin Tyson Porlas, is getting the hang of budgetary decisions determining whether he’ll be an aggressive or conservative driver.

“I pay for everything out of my pocket, and Brandon does too. Right now he does, so he’s going to learn.”