Sunday, the Toyota/Save Mart 350 at Sonoma was the last race of the FOX broadcast season and Darrell Waltrip’s commentating career, it was a race that would cap off with a thrilling late run for the lead and an underdog moving through the field for his career-best finish.

The day began with Kyle Larson starting on the pole, his third straight pole at Sonoma, but he would lose the lead immediately after Waltrip’s last, “Boogity boogity boogity!” as William Byron pulled a perfect launch and pulled away. Larson continued the fall back as drivers like Chase Elliott, Joey Logano, and Denny Hamlin passed him. Byron extended his lead to over three seconds while some of the lead pack drivers pitted with three laps to go to set them up for a good stage two restart. Byron went on to win stage one by over nine seconds, the first stage win of his Cup career.

After pitting late in the first stage, Chase Elliott inherited the lead at the start of the second. Much like Larson, Elliott lost the lead as he went too wide into turn one and Truex would pass him. After some close calls from Aric Almirola and Paul Menard having spins which didn’t bring out cautions, green flag stops began before the stage end again. Truex pitted, giving the lead to Hamlin who would stay out to get the stage win and the crucial points.

Stage three started with Truex back in the lead while Ryan Blaney, who had a quiet but effective race all day, got by Elliott for second and competed for the lead for a little while until falling to Elliott and Kyle Busch. A few laps later Busch pulled into second after some heavy contact with Elliott, crumpling in his front end. Busch began to reel in Truex for the lead until green flag stops started with thirty to go as Elliott pulled into the pits with a motor going sour, ending his strong day. With twenty-six laps to go, Truex pulled in to pit and Busch took the lead in a strategic play. With 24 laps to go, Busch took on fresh tires for a run at Truex. As Busch started to run him down, Truex, a surprise contender came into view over the last 20 laps. Matt DiBenedetto, who was running top ten most of the race and running a tribute scheme to Darrell Waltrip, embraced the Waltrip nickname of “Jaws” and bit his way through the top ten, including giving a bump and run to Kevin Harvick for fourth place at the end of the race.

With only a few laps to go, Busch made up an eight-second deficit to catch up to Truex largely due to lapped traffic and some perfect corners. Busch continued to push the issue until tires would even out on the two, giving Truex the opportunity to pull away again and get the victory, his fourth of the season. The win tied him with Busch for the most this season in the Monster Energy NASCAR Cup Series. As the broadcast would end with Truex and his team celebrating, FOX would cut away to Mike Joy and Larry McReynolds with Darrell Waltrip. They called Jeff Gordon into the booth as the four of them would hug and say a goodbye and thank you to one of the most influential names in NASCAR history as both a driver, a former team owner, a commentator, and most importantly, a friend to the fans and all of NASCAR for over forty years. A fitting end to a legendary career. 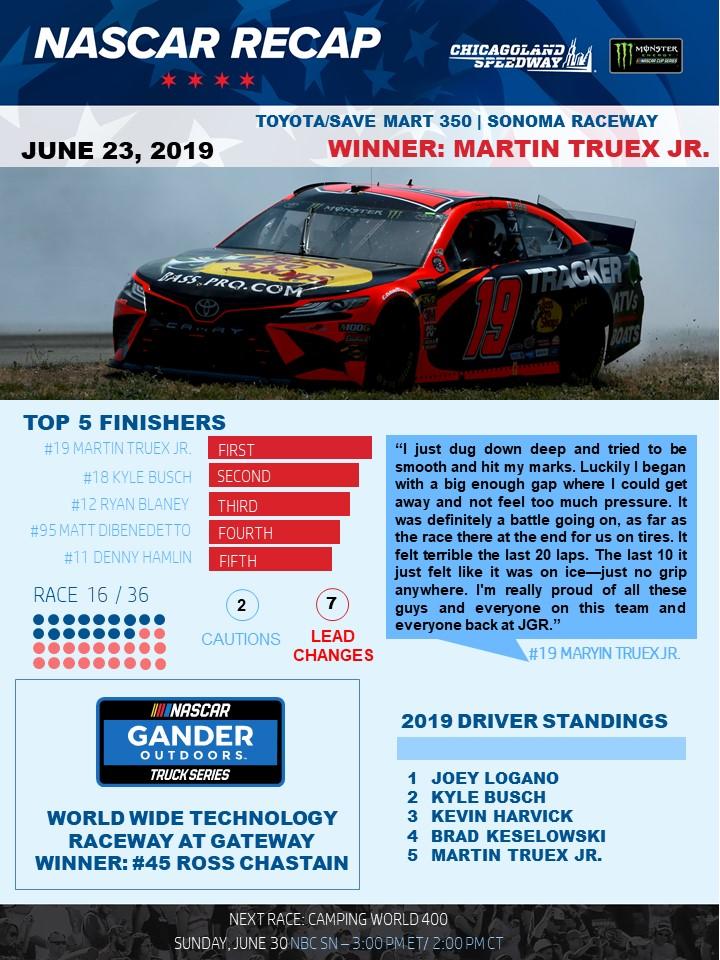