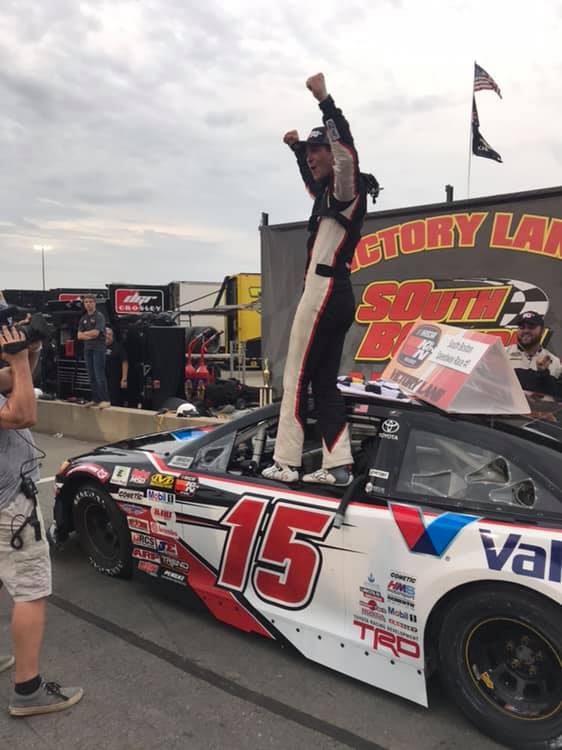 Tanner Gray is back to his winning ways – except now in the NASCAR’s K&N Pro Series East ranks for the first time.

Gary won race No. 1 of the WhosYourDriver.org Twin 100s, as he muscled past Bristol (Tenn.) winner Sam Mayer to get the overtime win May 4.

“It was super cool to get a win,” said Gray, 20, in an interview with Competition Plus. “Obviously, I’ve been wanting to get one and things had not worked out for us. Then, everything came together at the right time.”

The victory didn’t come without drama for Gray. He led 80 laps and then was passed with 20 laps remaining and out came a caution flag at the end of the race. Gray proceeded to win on the green/white/checkered finish.

“It was really cool to win that way,” Gray said. “I was able to do a little bit better job on the restart and get my way around him (Mayer). He had a little better car and I just outraced him I guess, and it was really good.”

In race No. 2, May 5 at South Boston, Gray finished fourth after being hampered by receiving a black flag for jumping the initial start.

Gray acknowledged he was getting antsy for a NASCAR victory, especially after the huge amount of success he had in NHRA Pro Stock.

“It was somewhat frustrating because we ran so good in NHRA stuff,” Gray said. “I felt like I was struggling a little bit here and there, but I feel like it is finally starting to come together. We’ve had good speed all year, we just had not been able to put it together. We were able to (at South Boston).”

Gray said there’s been a learning curve for him in making the switch to NASCAR driving.

“It wasn’t something I was doing every day,” Gray said. “Now, that I’m doing this every day I’m having to adjust to a lot more and whatnot. The main goal is competing in the Monster Energy NASCAR Cup Series. I want us to progress as fast as we can. We’re doing whatever we have to do to get there.”

Up next for Gray is a test session Tuesday in an ARCA Series car at Charlotte (N.C.) Motor Speedway. Then, Gray will fly to Tucson (Ariz.) and compete in the NASCAR’s K&N Pro Series West. There are two Port of Tucson Twin 100 races May 11 at Tucson Speedway.

As for leaving NHRA Pro Stock, Gray has no regrets.