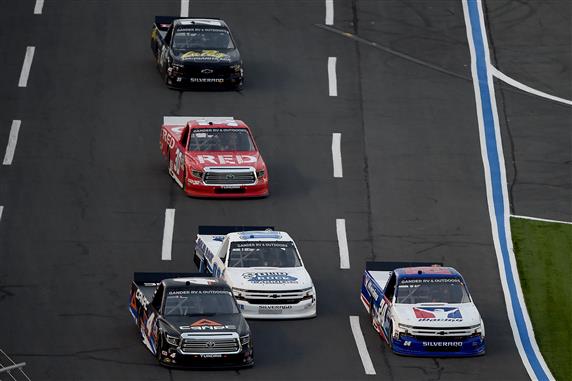 On his first try, the bounty hunter got his prey.

In the closing laps of Tuesday night’s North Carolina Education Lottery 200 at Charlotte Motor Speedway, Chase Elliott held off a determined charge from Kyle Busch in the closing laps to earn the victory and a $100,000 bounty offered to any full-time NASCAR Cup Series driver who could beat Busch.

Not bad for a guy who hadn’t competed in a NASCAR Gander RV & Outdoors Truck Series race since 2017.

Busch had won each of his last seven starts in the Gander Trucks, dating to 2018, but Elliott had plenty of incentive to end that string. Driver Kevin Harvick and Marcus Lemonis, chairman and CEO of the series sponsor, each put up $50,000 for any full-time NASCAR Cup Series driver who could beat Busch in a Truck race. The money is earmarked for coronavirus relief.

"It was a lot of fun," Elliott said of Tuesday’s win. "First off, a thanks to (sponsors) iRacing and Hooters, Chevrolet and GMS (Racing) for letting me come do this. (The truck) was really good from the get-go, for having no laps (of practice). The splitter was where it needed to be," said Elliott.

"It made it easy for me to move forward and try to get back acclimated… It doesn’t make up for Sunday, but it was still a really good night. Glad to win and glad to do some good for the relief effort for this virus."

Busch was 11th for the final restart on Lap 109 of 134. By Lap 114, he had surged into the second position and trailed Elliott by .974 seconds. Busch got as close as .301 seconds on Lap 129, but on the following circuit, a lapped truck took Busch’s preferred inside line through the corner and broke his momentum.

When he crossed the finish line, Elliott held a .627-second lead.

"He was a little better than I was there at the end," Elliott acknowledged. "I got tight. I don’t think we adjusted enough on that last pit stop (on Lap 89). I was a little scared. I really didn’t know exactly what I needed or what these things did as time went on.

"Luckily, the right front stayed on it long enough to get to the end. And I think he (Busch) burned out his stuff pretty hard trying to get to me. It was a lot a fun. To be able to come out and outrun him, and him finish second—I’d much rather him finish second than wreck or something, so I feel like I did something right."

Busch had to come from the rear twice, after a pair of long pit stops to adjust the height of his No. 51 Toyota. Busch said afterward that the feel was never right.

"We were out in left field the whole night, never really had a great feel for the truck, a great-driving truck, and just salvaged what I could," Busch said.

Where Busch’s winning streak ended at seven, Elliott’s reached two. In 2017, the driver of the No. 24 GMS Chevrolet won from the pole at Martinsville in his previous Truck Series start.