DENNY HAMLIN DOMINATES A DELAYED DAYTONA 500 TO A SOMBER VICTORY 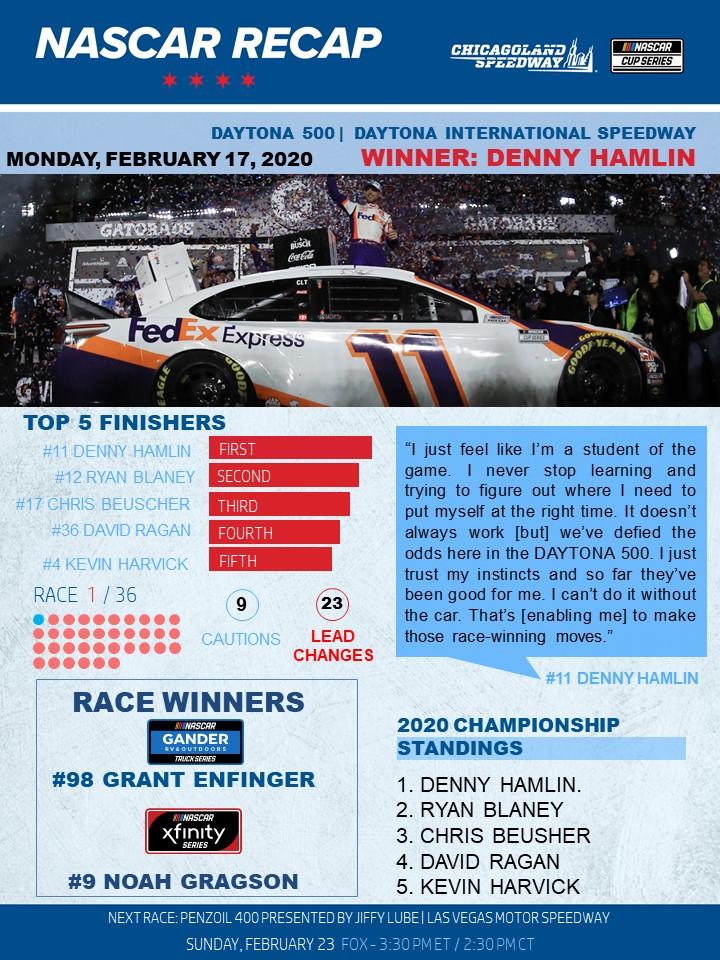 It’s safe to say that Denny Hamlin knows how to race at Daytona International Speedway; he only has three wins at the track, but they've all come the most prestigious race of them all, the Daytona 500. Hamlin was able to pick up the win after passing Ryan Blaney and Ryan Newman on the last lap but the victory celebration would be overshadowed by a scary situation developing on the track.

Ricky Stenhouse Jr driving for his new team, JTG Daugherty Racing after being let go from Roush Fenway Racing at the end of 2019, secured the pole for the 500 with Alex Bowman starting second and Joey Logano and William Byron would start behind them after winning their respective duels. That was all overlooked as President Donald Trump was announced as the Grand Marshall for the race; the first time since the 2004 Daytona 500 that an active U.S. president attended a NASCAR race. After President Trump gave the command, he stepped into his limo to take a lap around the track with the drivers. Right as he pulled off the track is when the long night began.

Rain, a common sight in the 2019 NASCAR season, reared its ugly head again to start off the 2020 season. Before taking a single lap, the drivers were brought back down pit-road to wait out the rain. After a delay, the cars were able to get back rolling and the green flag finally came out. Immediately, Stenhouse, Bowman, and Aric Almirola began to pull away from the field as they got three-wide behind them. After a few laps, the field settled down and began to turn into a single-file line as the threat of rain loomed again just a few miles away. Mother Nature backed up that threat as on lap twenty the rain started falling and drivers were brought back down again for the red-flag. After a few more hours and some moments of false hope, the race was officially postponed to Monday.

A new day, the rain is gone, yet the day would end with a dark cloud over Daytona. Brad Keslowski and Ryan Newman gain the lead after pit stops with Keselowski getting out ahead of everyone while they fanned out behind him. Almirola began to contend with Keselowski for some time until Keselowski started pulling away again. Newman took the lead after a strong push from Almirola until Almirola gets the same push form Kevin Harick. As all this was happening, Chris Buescher, bided his time and was awarded the lead. Seemingly out of nowhere the Hendrick Motorsports drivers had all gotten together and produced a strong line that shot to the front and got everyone to go back into single file. All the drivers were using a fuel strategy to make it to the end of the stage; it was thrown out as soon as Byron slightly checked up when Stenhouse had a plan to get behind and push him. Byron’s day was done as stops began. Chase Elliott and Jimmie Johnson started on the front row for the short shootout for the stage win. With a strong push from Bowman and no true competition to contest, Elliott won the first stage of the season.

Most drivers stayed out as all the Toyotas and a few others stayed out for the stage 2 start. Hamlin was on the front row with Cole Custer; with help from Martin Truex Jr, hamlin was able to rocket away. A single-file line began to form until Stenhouse formed a new line and caused the field to shuffle around until there were two lines once again with Keselowski leading the outside this time. Things started to look bad for Hamlin as he picked up a large piece of debris on his grill cover and started to overheat with no good way of helping himself. Hamlin got the caution he needed shortly after as Quinn Houff tried to block Almirola and essentially got thrown into the wall with the contact. BJ McLeod tried to check up and got into the wall and acquired heavy damage as well; the two driver’s days were done. On the restart, Hamlin led as Stenhouse was second, Hamlin got down in front of Stenhouse on the green as a game of musical chairs began to lead the other line. A top line kept forming and falling as the field tried to keep up with Hamlin. On the last lap of the stage, everything started to get sketchy as everyone tried to make new lines or join in with others. The series of events did not bother Hamlin one bit as he was crossing the line while holding off Stenhouse who was trying everything but wrecking Hamlin to get the stage win.

Stage three starts off exciting as Elliott drags his gas-can out of his pit box and Truex hit it; Elliott was penalized while Truex had to pit to check damage, With a push from Joey Logano, Blaney got the lead but not for too much longer as Stenhouse gets pushed back to the lead by Ross Chastain. Blaney got back to the lead after the top lane formed up again and got very strong as it began to pull away. Stenhouse and Hamlin then started taking risks to get back to the front; the rest of the field, seeing this, decided to join in with making dangerous moves as well.

As another single-file line formed, Kyle Busch got to the lead as Keselowski tries to form another line. Keselowski succeeds and grabs the lead while Blaney behind him is all over the track with a very loose car. Loose car or not, Blaney got to the lead but in doing so he put Stenhouse in a situation where he clearly went below the yellow line and got a penalty from the move. With the field all scrambled again, Logano got to the lead and tried to form a single file lineup to help out with upcoming green flag stops. Pit stops began and trouble followed it as Stenhouse got hit by Erik Jones and he spun on his way to the pits. Stenhouse’s spin did not cause a caution but his hood had flown up with heavy damage. As Custer had to pit from some heavy smoke, Kyle Busch inherited the lead again.

A second group of drivers with four fresh tires on each began to catch up. Kyle Busch had to check up and go hgh and out of the racing groove as he seemed to have a cylinder go out. Ryan Newman was then pushed to the lead as the huge one hit shortly after. The wreck itself is caused by Logano after some aggressive bumps turned Almirola into the wall and other drivers. Brad, Johnson, Treux, and DiBenedetto, were wrecked as Kyle Busch was called to the garage to end his race as his car was throwing smoke everywhere. On the restart, its Newman and Bell; Logano pushed Newman as Bell was just able to hold on. As the second line began to drop the yellow came out for Reed Sorenson had a part break and ended up in front of Timmy Hill; ending their solid runs during the night.

With four to go on the restart, Hamlin pushed Newman way ahead of the field all by themselves which allowed everyone to come back to them. A hard-charging Ross Chastain brings out another caution as he goes for an open spot and Ryan Preece closed the door and him too late and Chastain got sideways and collected Preece, Tyler Reddick, Christopher Bell, and Ty Dillon. With another caution, Hamlin started first with Chris Buescher alongside him; that wouldn't last long though as Michael McDowell got Clint Bowyer loose on the start and right into Justian Haley, the drivers would spin but they were all moving. On the final overtime attempt is where the race really took a turn for the worse. Hamlin was first with Newman beside him, Newman was pushed to the lead and it looked like he was going to victory lane. Coming off of turn four, Newman tried to lock Blaney and got spun hard into the wall and flipped only to be hit once again by Corey Lajioe and slide on his roof down the straight away. Meanwhile, Hamlin was able to avoid Newman and beat and bang into Blaney for the 500 win.

As Hamlin came back around to celebrate it was clear that something was wrong, Newman was still in his car and there were no signs of him getting out. He was finally stretchered out and taken to the hospital, where everyone waited with bated breath to hopefully hear he was alright.

Thankfully, it was announced that while seriously injured, Newman did not have any life-threatening injuries and was even awake and talking to his family the next day. Meanwhile, Hamlin was unable to truly celebrate his third Daytona 500 win until he found out his fellow competitor was okay.

The 2020 Daytona 500 had everything a NASCAR fan could ever want and yet, it almost had the one thing no one wants. Nothing but prayers and well wishes to everyone involved and we all hope to see Ryan Newman back on track soon.