CP MOTORSPORTS - TOM HIGGINS: THE GHOSTS OF CHAMPIONS PAST LURK AT WATKINS GLEN

The sound is distinct, but eerily faint, almost ghostly. It seems to be emanating from afar.

And then, I remember …

In the dimly-lit bar at rustic Seneca Lodge, deep in the woods of southern New York state near the storied Watkins Glen race course, several laurel wreaths hang on the walls.  Even when I first visited in 1986 their leaves were brown and brittle with age.

In another time, the wreaths had draped the necks and graced the shoulders of drivers victorious in the U.S. Grand Prix, a Formula One race held for many years at Watkins Glen. They were worn by such legendary drivers as Jimmy Clark, Graham Hill, Ronnie Peterson, Jochen Rindt and Gilles Villeneuve.  Each of them is now gone.

The wreaths were left behind as mementos, and through all these intervening decades they have remained in place.

Legend has it that following the wreath-hanging ceremonies in the tavern of Seneca Lodge, the F-1 winners stood on the bar while crewmen threw beer on them.

When NASCAR returned to Watkins Glen in ‘86—after being absent since 1965 — I remember the late Tim Richmond being enthralled with these tales while visiting Seneca Lodge and seeing its treasure trove of memorabilia.

“There’s magic here,” Tim said. “Ghosts are lurking round. Getting to race at Watkins Glen gives me goose bumps.”

And then, Tim went out and won the inaugural Bud At The Glen, as the race was then known. He triumphed in stirring fashion, with a late charge to catch and pass Darrell Waltrip with just 12 of the 90 laps remaining on the 2.428-mile road course.

After post-race proceedings, Richmond ordered his teammates and friends down the hill to Seneca Lodge for a party like the Formula One folks had enjoyed.

The revelry was going strong when Tim’s delight turned to dismay. He suddenly realized that he had no wreath to hang on the wall. He hadn’t been given one because the practice was discouraged by NASCAR. The foliage, see, obscured the driver uniform logos of sponsors in the hundreds of photos shot during Victory Lane proceedings.

Tim grew increasingly upset, but the savvy veteran Hyde calmed his mercurial driver.  Hyde suggested that the team “enshrine” a tire from its winning car.
Mollified, Richmond sent crewman David Oliver to fetch a tire from the team’s transporter parked outside. 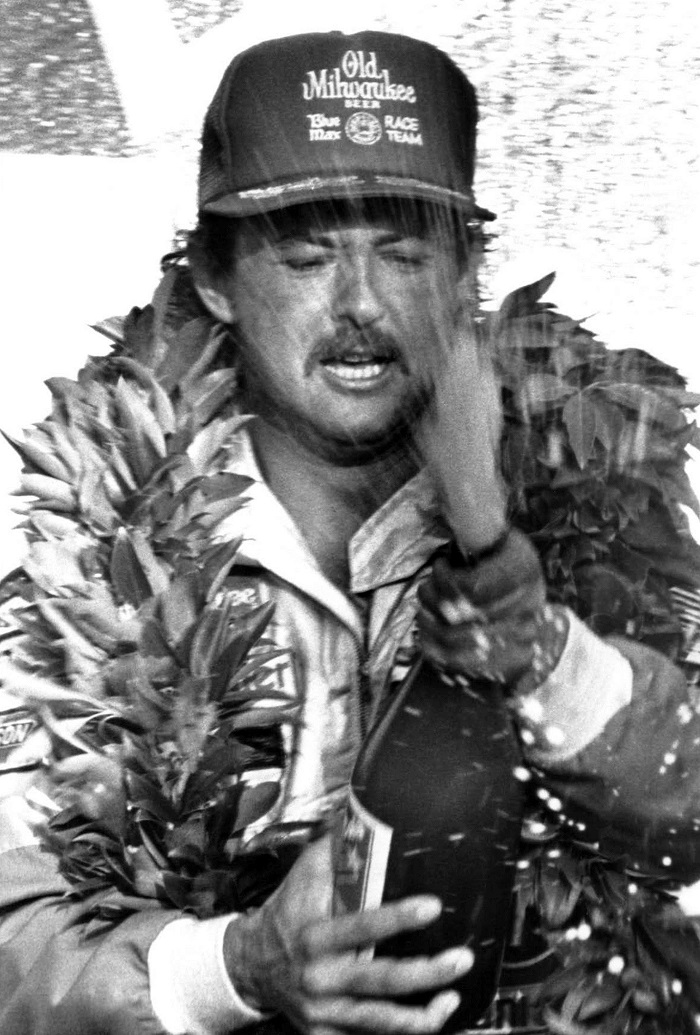 Tim was waiting anxiously as Oliver returned with the tire that had been part of the fulfilling victory. With much ado and amid great applause, Tim and

Hyde hung the tire on the wall.

Then Tim stood on the bar and was splashed with beer by teammates.

Like those Grand Prix greats, Tim Richmond is gone, too. So is Harry Hyde.  Richmond became a victim of AIDS in 1989.  Hyde died in ’96 of a heart attack.

Old-time patrons at the bar in Seneca Lodge regale newcomers with tales of the fabulous Formula 1 drivers and Tim Richmond. But perhaps the drivers are remembered best by the yellowed wreaths and that tire, all of which serve to hallow the place.

Some racing fans claim that late at night, when the bar is quiet and the lights are low and the crowd is gone, those who use their imagination can hear the brittle leaves rustle and the tire of Tim Richmond whir.

They claim you can hear the long ago laughter of the drivers and their crews, and you can smell the foaming beer.

Ghosts are lurking 'round.