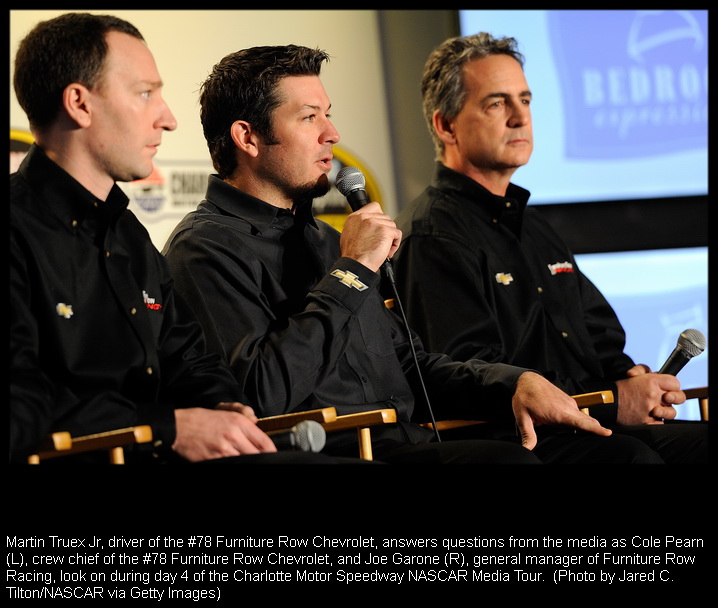 Unfortunately for them, the big teams did as well.

When Todd Berrier left his position as crew chief for Furniture Row Racing's #78 Chevrolet to take a managerial job as Director of Inspections with Joe Gibbs Racing, the 32-year old Pearn assumed the vacancy.

Truex, Jr, approves of the hiring of Pearn and applauds him for sticking with the program.

“I think one of the neatest things is that there were a lot of big teams after him last year and this winter,” Truex, Jr, said. “We are very proud that he stayed with us. I’m proud that he stayed with us because he knew what we were capable of. It’s been neat to see and it’s been fun to have the success early on to keep him motivated and keep him in the game and pushing hard.”

Now guided by Cole Pearn, veteran Martin Truex, Jr, is off to the hottest start of his Sprint Cup career..

By notching top-ten finishes in the series’ first seven stops the 12-year Sprint Cup veteran has set a scorching pace for the duo.

“He is a really awesome guy," Truex, Jr, adds. "And he’s pushing hard to get our stuff better and go out and win races."

Pearn has called races from atop the pit box for Furniture Row Racing before but the 2015 season will mark his first as the full time crew chief.

After an eventful race in Phoenix, which saw him put his streak of consistency in jeopardy, Truex, Jr., was quick to demonstrate his faith in the young crew chief.

"It was looking pretty grim there for a while," said Truex, Jr. "But we never gave up and I drove my guts out. It was the pit call by Cole that got us back up front late in the race. We stayed out on that late race caution which got us back in the top-10.”

“When it comes to pit calls Cole has been spot on and I am just going to do whatever he tells me to do. I believe in him that much.”

Pearn joins a number of successful NASCAR teams who are guided by crew chiefs who have race experience themselves including Kevin Harvick’s crew chief Rodney Childers and Brad Keselowski’s head man Paul Wolfe.

Truex, Jr, points to Pearn’s in-car experience as a reason for the team’s turnaround.

“Cole and I just get along really well,” Truex, Jr, told NBC Sports back in March. “We are similar personality wise; we grew up in similar ways. We grew up driving as young kids racing go-karts, to stock cars and all those things. The only thing that’s different is he went to engineering school and I got hired to drive for a living.”

“I have a lot of confidence in him and I feel that from him. That’s important as a driver”

Pearn grew up in racing. His father was a veteran on the short track circuit in Canada and guided his son into go-karts and late models when he was young eventually competing in NASCAR’s Canadian Tire series.

He attended the University of Waterloo where he graduated with a degree in mechanical engineering.

Pearn was later hired on as an engineer for Richard Childress Racing in 2008. He worked on the #29 team which was then piloted by future Sprint Cup champion Kevin Harvick.

Richard Childress Racing has an alliance with Furniture Row Racing, providing the operation with not only chassis’ and engines they also provide valuable racing data for the single car operation.

After a runner up finish in Las Vegas, Truex, Jr, attributed the success of the young crew chief to his familiarity with the RCR program.

While Truex, Jr, and Pearn have not been to victory lane with each other, yet, their consistent start is turning heads. The seven consecutive top-ten starts are more than Furniture Row Racing had in all of the 2014 season.

Truex, Jr, plans to live in the moment and enjoy the consistency for which the team has achieved so far.

“We will take it one day at a time, one race at a time and see where we end up.”