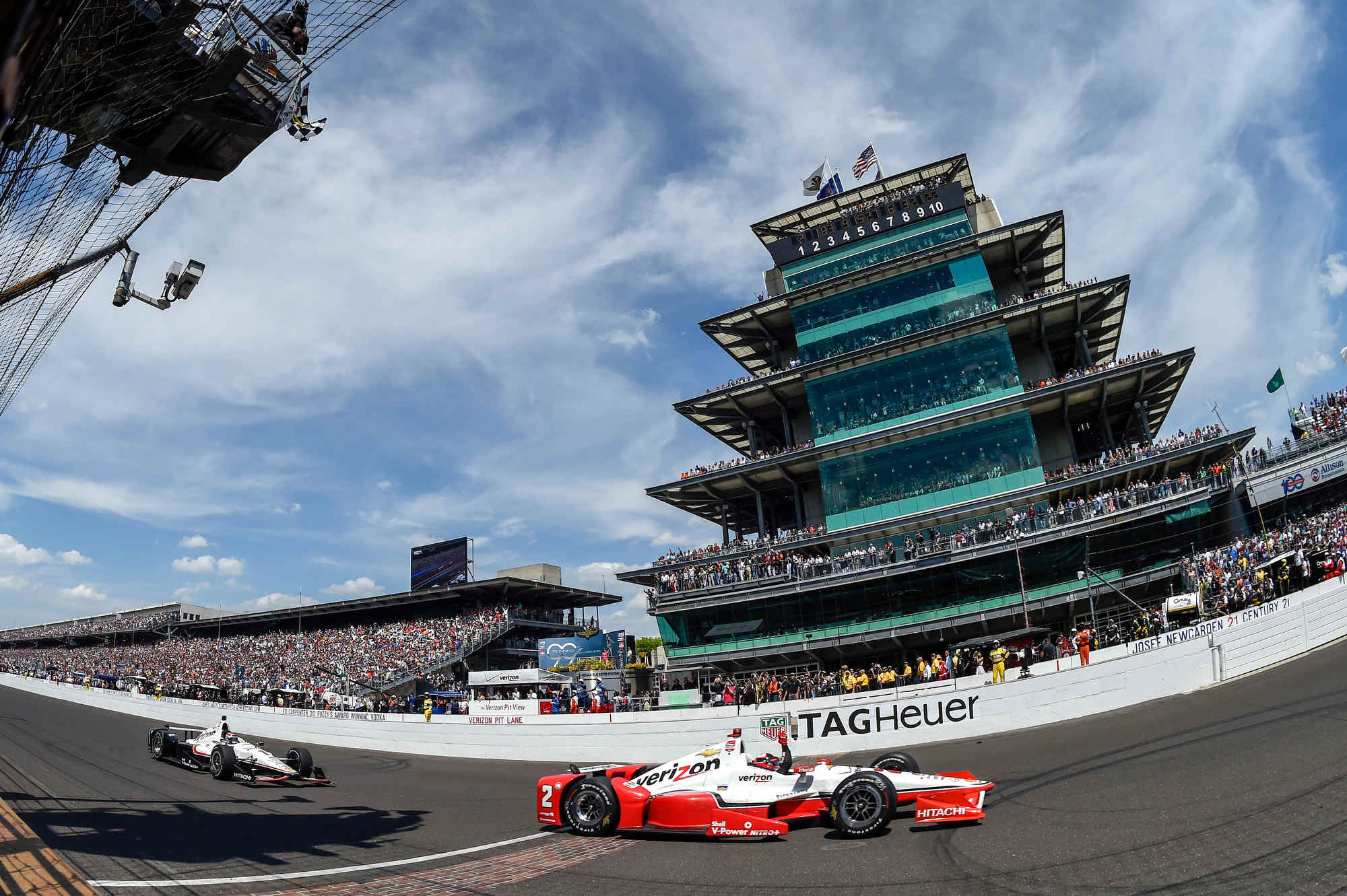 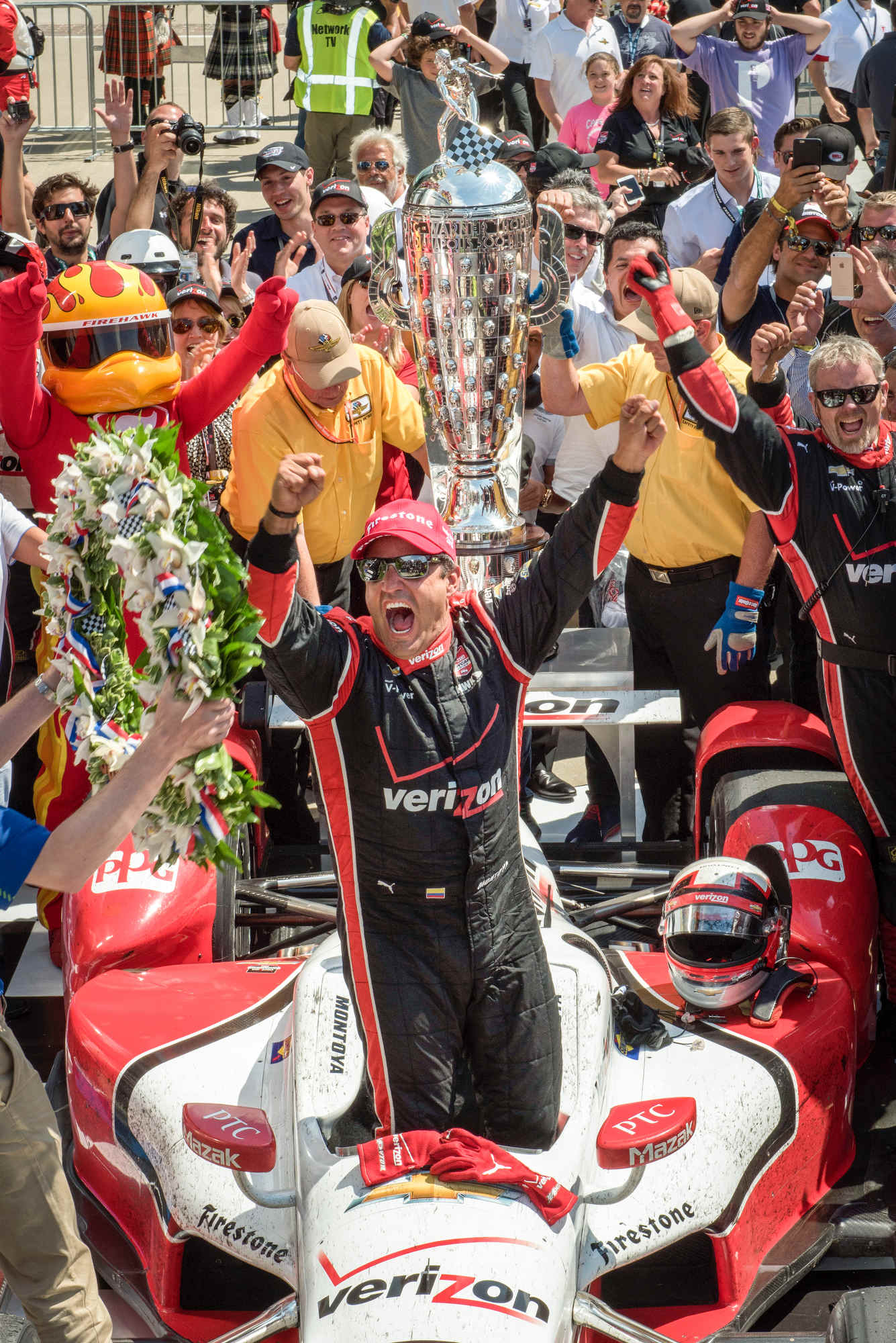 The chain on the bicycle of Penske Team Manager Jon Bouslog broke, tossing him to the pavement and knocking him unconscious. His emergency trip to the hospital happened amid the swirl of skepticism and criticism of aero kits and skittish cars that seemed to flip over all too easily.

And team owner Roger Penske slogged through it, hoping it wasn’t going to be an epically disastrous month of May at the Indianapolis Motor Speedway. His spirits lifted when his driver Helio Castroneves and crew won Friday’s lucrative pit stop challenge.

But Juan Pablo Montoya officially restored order for his orderly boss Sunday. He ignored the collection of calamities and masterfully fended off the best the Verizon IndyCar Series threw at him to win his second and Team Penske’s 16th Indianapolis 500 Mile Race.

The 1-2 finish for Team Penske came as Montoya, the versatile Colombian world-class racer, came from as far back as 30th place to foil Verizon Team Penske mate Will Power, the Chip Ganassi tandem of relative darkhorse Charlie Kimball and polesitter Scott Dixon, and hot-streaking Graham Rahal.

Penske lauded the quality of competition in this 99th running of the Memorial Day weekend classic, saying it was especially gratifying that it was “some race, when you think about how we started the month, all the issues, the negative things that came out about the cars, and what have you.” He marveled at the green-flag free-for-all that gave the sizeable crowd one of its most thrilling finishes.

“I’ve never been here where I saw 15 laps at the end there that could have been anybody’s race. They raced clean. They passed. So there’s something working,” he said. “I could see he was passing his way up [through traffic], and I knew he had a good car. He’s a fighter.”

Montoya scored his repeat victory a record 15 years after his first (ironically from the 15th starting position, like in 2000). After swigging from the traditional bottle of milk, kissing the famous yard of bricks that make up the start-finish line, and taking a victory lap in the pace car with his wife and three children, said, “This was a lot of work today. When you have to work for it that hard, it’s exciting.

“I know Will is probably disappointed right now he finished second,” he said. “But in a couple of months he’s going to look back and say, ‘Man, that was fun. That was a hell of a race.’ ”

As early as Lap 7, Montoya wound up back in the pits for repairs after Simona de Silvestro banged into him.

“That’s what happens when you qualify bad,” he said. “You find yourself with the wrong crowd. Simona didn’t do it on purpose. She wants to prove she’s that good. She has a lot of speed, but when you’re racing for a job, it’s a lot harder.”

Montoya said, “We kept adding downforce and adjusting the car. It was fun, because after the caution [one of six under sunny skies and slightly breezy conditions], when I was running like eighth, I could barely keep up with them. I’m like, ‘We don’t have anything.’

Penske said, “They kept working on that car. That was the difference. His car got better. It wasn’t like he had the same car as when he started.”

Montoya said, “What really matters is the last 15 laps. That was fun racing, probably the best racing. Will and Dixon, we have a lot of respect for each other. We understand the risk, and we understand when they got you. So it makes it fun.  I got a hell of a run. I think Will had a bit of understeer . . . and I think that really played into our hands, because he couldn’t get close to me out of Turn 2 [on the final lap].”

Power agreed. “Honestly, when I lifted in [Turn] 3 for the understeer, I knew it was over. There’s no way you’re going to get him. No way. It sucks.”

Meanwhile Montoya knew. “I got into Turn 3. I come out of Turn 2. Will pushed. I had to push. The gap got bigger. Turn 4 he wasn’t close enough.” That’s when he cackled to himself, “Ha ha ha! I got this!” Montoya said, “I was screaming. I was so happy.”

During that final run, Penske said, “you never knew who was going to lead the next lap, down the front, down the back. Once I saw our two cars pull away, Dixon was battling the 83 (his own teammate Kimball). I thought it gave us a real good chance. It was great for the fans. I hope that erases some of the negative publicity we got earlier in the month. That kind of racing, at 220-222 miles an hour, inches apart lap after lap, it shows you how good they are.

“To me, the fan noise is what it’s all about. When you look down that straightaway, never saw so many people. To think we’re on the platform is pretty special,” he said.

Rahal, who finished fifth after starting 17th in the Rahal Letterman Lanigan Steak & Shake Honda, said, “I thought the racing today was great. I think the racing here in recent years has been phenomenal. You saw guys be patient till that last little bit. [With] 16 to go, everybody was going to hang it all out. They did. I hope everybody enjoyed it. It was thrilling for us.”

Kimball characterized the action as “a lot of intelligent, respectful racing” He said it “doesn’t mean it was not hard-fought right on the edge, but everybody understood what the situation was and was racing each other very cleanly.”

The Bogota native who lives in Miami became a two-time winner in only his third Indianapolis 500 appearance. Castroneves, his teammate, was the only one to do so quicker. He won in his first two starts in 2001 and 2002.

On a day with 10 different leaders (and 37 lead changes among them), Montoya paced the field on four separate occasions for only nine laps. That’s the third fewest laps led or a winner. Dan Wheldon led only one when he triumphed in 2011, and Joe Dawson was in front for just two laps in 1912.

Ryan Briscoe, subbing for the injured James Hinchcliffe, made the biggest improvement Sunday. He began the day 31st in the order and gained 19 positions to bring home the Schmidt Peterson Motorsports Arrow-Lucas Oil entry home in 12th place on the lead lap.

Sixteenth-place Gabby Chaves, like Montoya a Bogota-born driver, was the top-performing rookie.

He said, “I remember being six years old. I woke up early in the morning, watching [Montoya on TV] in CART and Formula One. Congratulations to him. I’m sure the whole country is very proud and happy. Hopefully one day we can join him up there [on the podium].”

The other rookie, Stefano Coletti, took 25th place, thanks to an accident.

Jim Campbell, Chevrolet’s U.S. vice-president for performance vehicles and motorsports said, “In addition to Juan Pablo Montoya's win, it was great to see Will Power, Charlie Kimball, and Scott Dixon deliver a 1-2-3-4 Team Chevy finish. I'm proud of all four of our major teams, each having at least one driver in the top 11.”