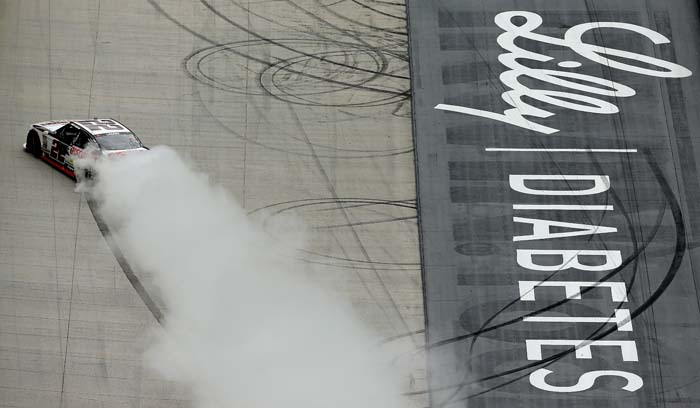 From the drop of the green flag until the checkered flag was displayed, the Drive to Stop Diabetes 300 from Bristol Motor Speedway belonged to Joey Logano.

Logano, who started from the outside pole, jumped out to a commanding lead in the race's opening stages and the Daytona 500 champion never looked back.

Logano held onto the lead through eight cautions leading all 300 laps of Saturday's race. Following a restart with 15 laps remaining, Logano was able to keep his #22 Discount Tire Ford ahead of Xfinity rookie Daniel Suarez by navigating and using lapped traffic to his advantage.

Taking the checkered flag, Logano earned his second Xfinity series win. He also became the 19th driver in Xfinity series history to lead every lap of a race. The last to accomplish the feat was Kyle Busch, who did it on his way to a win in Richmond last season.

"It's not often you have a car that's that fast," Logano said.  "When you have a car like that the whole race you're just hoping something doesn't go wrong and you're looking for the checkered flag because it's neat to say you've led every single lap. It's actually a pretty neat little thing, I've never done that before in my career in any type of race car. That's pretty cool to do today."

While Logano showed the way on the late restart, Suarez was able to cement himself into a career best finish of second just ahead of Chris Buescher. The finish is Suarez's second top-ten finish of the 2015 Xfinity season.

"To be honest, I'm super happy," Suarez said. "I mentioned a little bit ago that if somebody told me to take a top-ten and walk away, I will take it. So a second place (finish) is much better as a rookie. Very happy, had a really strong day. Hopefully we can keep the good work up and try to build some confidence and good results for the future."

Buescher's third place finish is his best career finish at Bristol Motor Speedway. The finish marks the 11th straight time he has finished inside the top-15, dating back to the 2014 Xfinity season.

"That was a lot of fun and the best we've run at Bristol since I've been doing it," Buescher said. "It was a good day for us and the guys did a good job. It was tough today, the line moved up especially on those last 30 laps all the way up to the fence. That made it really hard to pass at the end."

Defending Xfinity series champion Chase Elliott extended his streak of top-ten finishes to seven by finishing in the sixth position.

Two time Xfinity series champion Kevin Harvick had been running second to Logano for much of the race until a pit road speeding penalty sent him back in the field. Despite the pit road woes Harvick was able to salvage a finish of seventh place.

NASCAR's Xfinity series will be back in action April 24th at Richmond International Raceway.