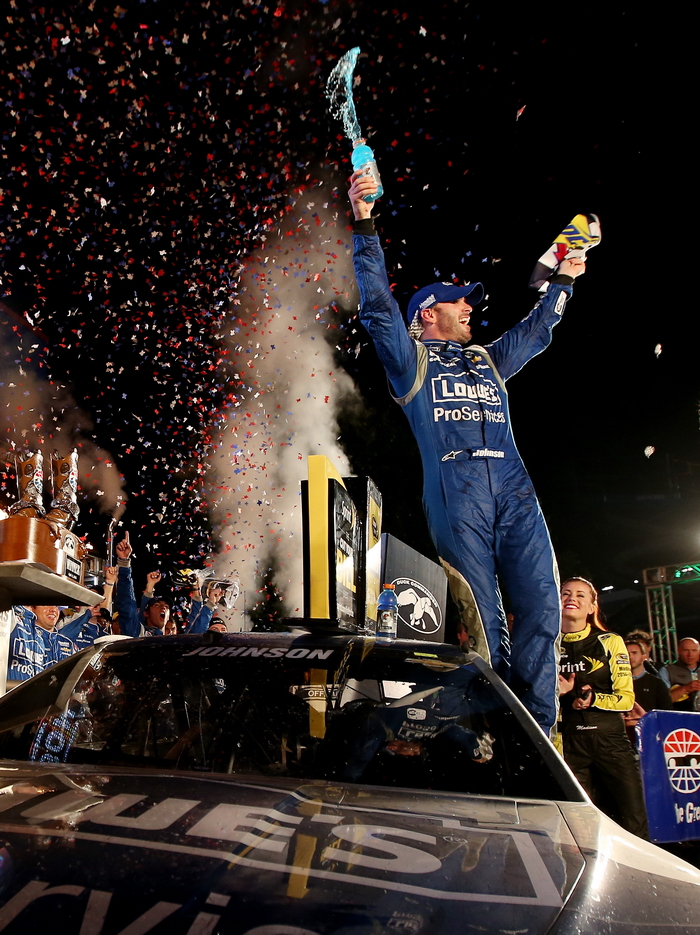 The win was his first in Spring race at the 1.5-mile speedwway.

Johnson, the six-time NSCS champion, took the lead on Lap 321 of the scheduled 334 when he drove under and past Jamie McMurray and Kevin Harvick exiting the dogleg. The final 14 laps featured a battle between Johnson and Harvick, the reigning NSCS champion, who finished second despite scraping the Turn 4 wall on Lap 331.

Johnson, driver of the No. 48 Lowe’s Pro Services Chevrolet SS, finished 1.107 seconds ahead of Harvick and his No. 4 Budweiser/Jimmy John’s Chevrolet SS. Johnson, of Hendrick Motorsports, posted his 72nd career victory in 478 NSCS starts and seventh for team-owner Rick Hendrick.

“The end of the race was nutty,” said Johnson, who explained he woke up sick Saturday morning and addressed the media post-race through a scratchy voice. “Those last three pit stops with the varied tire strategies, our car wasn’t handling like it did when we were leading. The third one (on Lap 310), our car was really, really good and I was able to work our way forward. The No. 4 was having trouble with the No. 1 (of McMurray) and slid up…and I thought I had it under control. Just a lot of great racing; the (worn-out) surface of this racetrack allows that to happen.”

Johnson scored his fifth win at TMS and third in his last six starts. Johnson earned his first win of the season at Atlanta Motor Speedway, a sister 1.5-mile layout to TMS, in the second race on the schedule.

“I think the tracks with high-wear and bumps…I think the surface fits my style and Chad’s style and what we do together,” Johnson said in reference to crew chief Chad Knaus.

“This is a racetrack that falls into Jimmie’s liking,” said Knaus, still sporting his Victory Circle Stetson. “Do we always race at night (here) in the spring? We’ve run very, very well here in the spring race so I think it was just circumstances that we hadn’t been able to pull it off previously. Nothing specific.”

Johnson pitted with most of the lead pack during the race’s eighth and final caution period on Lap 310, when Knaus played it safe with a call for four Goodyear tires. Four drivers—McMurray, Kyle Larson, four-time series champion Jeff Gordon and Martin Truex Jr.—opted for right side tires only. Johnson exited pit road in seventh after Larson was penalized for driving through too many pit boxes.

Johnson moved into third on Lap 317, behind leader McMurray and Harvick. Johnson completed his charge to the front on Lap 321, with Harvick taking second and Dale Earnhardt Jr. also passing McMurray. Earnhardt moved around Harvick on Lap 326 for second before Harvick returned the favor on Lap 329. Harvick then lost momentum on Lap 331 when he slid and scraped the wall in Turn 4 but still managed to maintain second. By then, Johnson was headed to the white flag.

“I had the car I anticipated I would have,” said Earnhardt, who scored his 15th top-10 finish in 26 races at TMS. “We made some good adjustments. We seemed to have a good pattern of what was working for us and I think by the end of the race we had our car as good as we had it all night.

“I like racing here. I think it was a good show. It was raining debris out there for a while and we needed some green-flag runs to get some of the track position back that we were having trouble keeping. Finally the rain shower of debris ended and we were able to finish the race.”

Johnson led on nine occasions for a race-high 128 laps to become the third driver to record wins in the spring and fall races at Texas, joining Denny Hamlin and Carl Edwards, both of Joe Gibbs Racing. Harvick, a two-time winner this season for Stewart-Haas Racing, led nine times for 96 laps.

Harvick’s bid to end a winless streak at TMS that now stands at 0-for-25 was evident on Lap 314 after the last restart, when he nudged the rear bumper of Logano’s car and moved him out of the way while battling for third.

“Yeah, it’s fine,” said Harvick, who interpreted Logano’s tactic as blocking. “Like the No. 22 (Logano), you knock them out of the way and that’s the chance you take when you block.” Harvick setted for his 13th top-10 finish in those 25 TMS starts and his seventh top 10 in 2015.

Logano classified Harvick’s move as “hard racing,” then admitted he was blocking. “It’s the end of the race. I blocked him and he got into me,” Logano said. “I get it. Early in the race that’s not acceptable. End of the race, we’re racing for the win. I’d do the same thing.”

Harvick exited Texas with a 25-point (306-280) lead over Logano in the points standings, with Truex, driver of the No. 78 Furniture Row/Visser Precision Chevrolet SS, third and 40 points out of the lead after a ninth-place result. 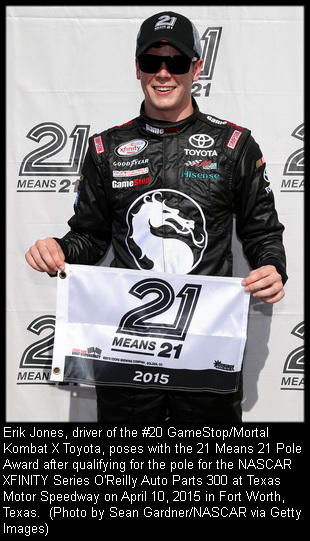 Starting on the pole for the second time in 2015, Jones led 79 of the 200 lapsz in the race en route to the victory. Jones tuns a partial schedule in the NASCAR Xfinity Series for Joe Gibbs Racing and is a full time competitor in the NSCAR Camping World Series for Kyle Busch Motorsports.

"Confidence is something that I never doubted in myself," Jones told TV reporters following the win. "Getting here to victory lane is amazing. We beat Cup guys tonight, that is amazing and I can't wait for the rest of the year."

Jones held off a furious charge from former Sprint Cup and Xfinity Series champion Brad Keselowski on the race's final restart. Jones then took complete control of the race finishing almost two seconds ahead of Keselowski, who led 56 laps in the race.

“We ran wide-open there for a couple laps,” Keselowski said. “It was just a matter of who was gonna lift first. Neither of us lifted. He just cleared me and drove by me. Erik had a great car and did a fantastic job.”

"This is certainly a huge notch in his belt and I'm happy for him."

Keselowski, driver of the #22 Discount Tire Ford, was forced to start the race in the back due to repairs made to his car following qualifying. Keselowski made his starting position a non issue by racing to the lead on lap 48.

"He definitely raced us hard and we raced him hard," Jones said.  "At the end of the day it worked out but it was pretty fun and we got to race against Dale Jr. Obviously he's a guy I've watched forever on Sundays on TV so to have my chance to race side-by-side with him is cool."

Earnhardt, Jr, driving the #88 Goody's Chevrolet, was impressed by the performance of the 18-year old. 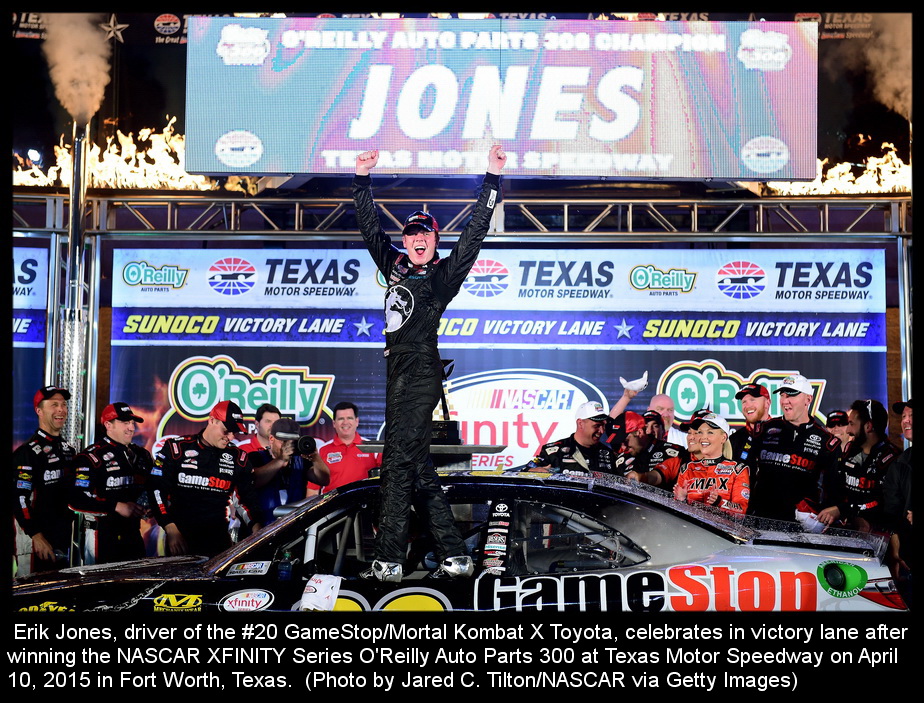 "I thought Brad had the best car, but right when it counted Erik took off and drove a great race all night," Earnhardt, Jr, said. "I knew he was good, now everybody else knows."

Jones is not eligible for points in the Xfinity Series since he is not a full time competitor.

"I hope they all had fun, I know I had a blast," Jones said. "I learned a lot racing side by side with those Cup guys." 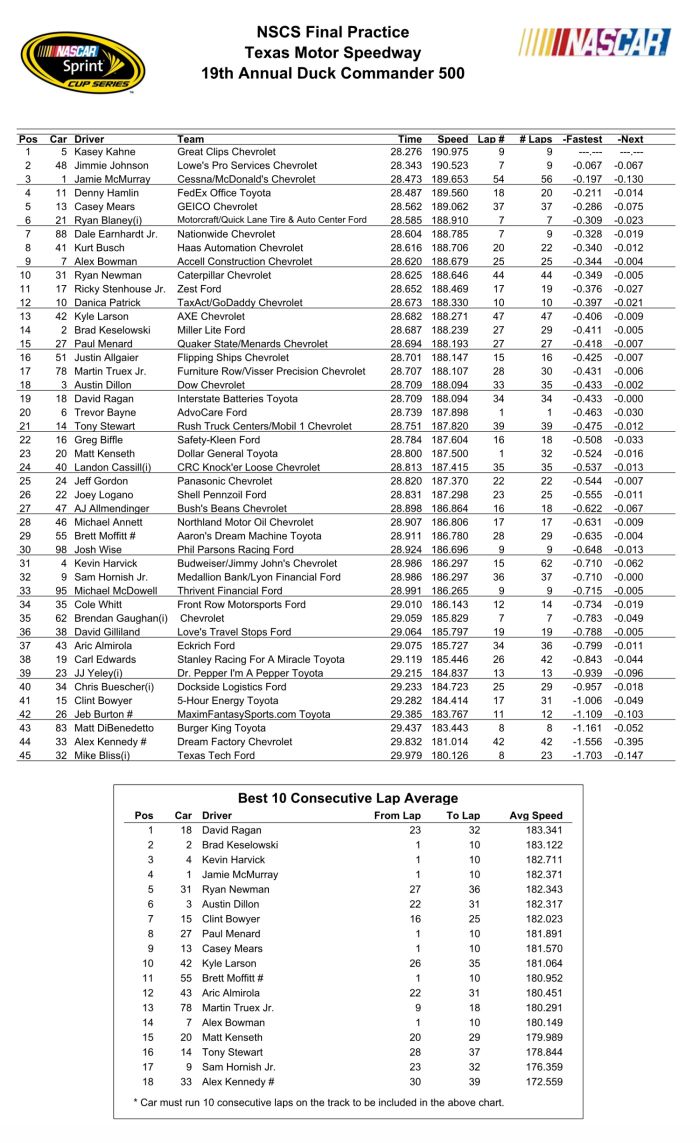 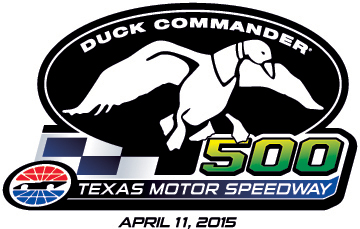 LOGANO LOOKS TO LEAD ONCE AGAIN - Joey Logano was able to survive an onslaught of late race restarts on his way to winning 2014's Duck Commander 500.

The victory was the first at Texas Motor Speedway for the 24-year old Connecticut native.

Logano, who won this season's Daytona 500, has earned two Coors Light Pole Awards and has finished in the top ten in every race this season.

This success comes on the heels of his five win performance in 2014, which started in this race last season.

This year he will once again have to compete with three former series champions including another run against his JR Motorsports boss Dale Earnhardt, Jr, and former JR Motorsports driver Brad Keselowski.

Also in the field is 2013 xfinity champion Austin Dillon.

Elliott notched his first career DNF in xfinity competition but since then he has been on a tear. He has tallied four consecutive top ten finishes raising his average finish on the season to 9.8.

Elliott emerged victorious in three races last season but is still on the hunt for his first victory going into the circuitís sixth race.

Kyle Busch is the all time leader in xfinity wins at Texas Motor Speedway with seven victories. 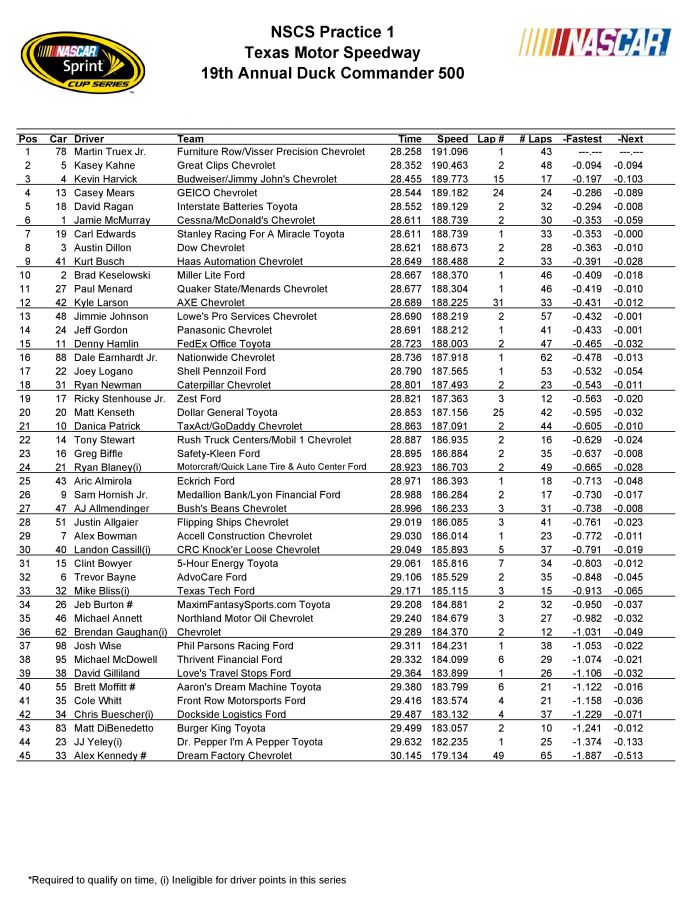 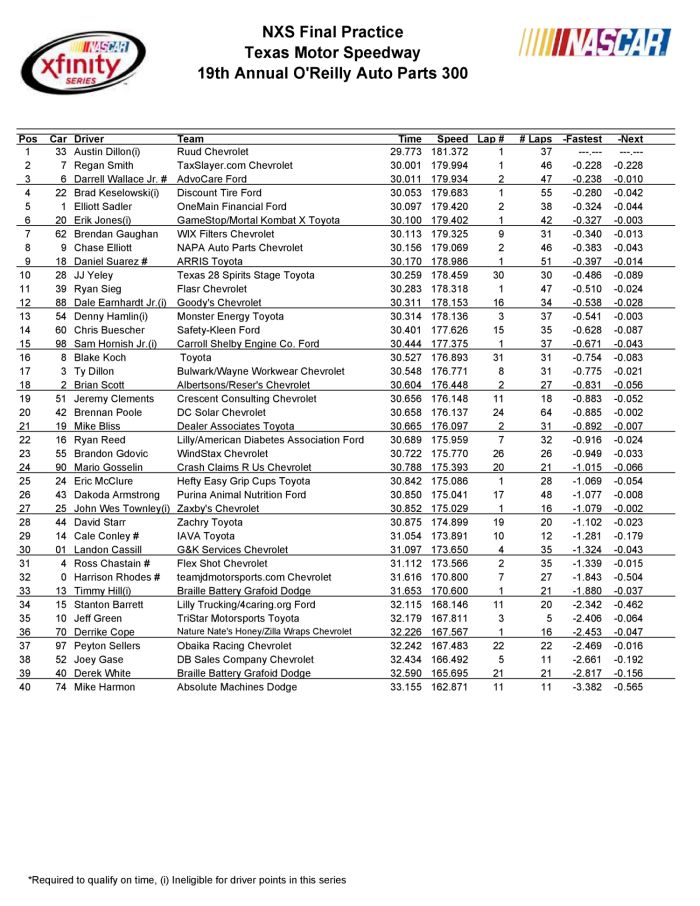 GORDON TO MAKE TV DEBUT  -  With NASCAR's xfinity series switching television carriers from ESPN to Fox Sports 1, new idas have been brought to the table.

Fox Sports has been utilizing drivers who are not competiting in the xfinity series races to provide color commentary on the races.

Gordon joins fellow Sprint Cup competitors Kevin Harvick, Clint Bowyer, and Brad Keselowski as drivers who have made an appearance in the Fox Sports 1 booth.

GOODYEAR TIRE NOTES - Tire set-ups will be the same for both Sprint Cup and xfinity competitors at Texas Motor Speedway this weekend. The setup is the same teams used for both Texas races last season.

The left side tire code, Dñ4392, was introduced at Texas Motor Speedway back in the 2011 season.

The right side tire code, D-4618, was just introduced at Texas last season in the spring race.

Teams will be using inner liners which is required by NASCAR on tracks which are bigger than a mile in length.

Ryan Blaney will return for the first time since the Daytona 500, driving the #21 Wood Brothers Ford Fusion.

Chris Buescher will once again pilot the #34 Front Row Motorsports Ford while regular driver David Ragan will be in the #18 Joe Gibbs Racing Toyota for injured Kyle Busch.

Brett Moffitt will also drive the #55 Michael Waltrip Racing Toyota for Brian Vickers who is suffering with a reoccurrence of blood clots.

Jeb Burton and Moffitt are the only two Sunoco Rookie of the Year candidates on the entry list.

Travis Kvapil who was originally on the initial entry list has withdrawn from the event.

While Jimmie Johnson has won three consecutive fall races at the 1.5 mile Texas track, the spring race is a different animal.

XFINITY ROOKIE OF THE YEAR RACE HEATING UP - Entering the OíReilly Auto Parts 300, Darrell Wallace, Jr, leads all xfinity series rookies for the Sunoco Rookie of the Year award.

In Wallace's five starts, he has yet to finish outside the topñ15 with an average finish of 11.8. This will be his first start in an xfinity car at Texas Motor Speedway.

Suarez, who is driving the #18 Arris Toyota Camry, has rebounded from a disastrous Daytona weekend by reeling off four straight top 15 finishes.

Just 11 points behind Wallace sits Ross Chastain, who finished in the top ten at Daytona but has not finished inside the top 17 since the series' opening race.

Also in the field is Denny Hamlin who will be at the helm of the #54 Monster Energy Toyota Camry. Hamlin will be doing substitute duty for Joe Gibbs Racing teammate Kyle Busch who was injured racing in the xfinity series earlier this year at Daytona.

Erik Jones will make the start for Joe Gibbs Racing in the #20 Gamestop Toyota Camry and John Wes Townley will make a start in the #25 Zaxby's Chevrolet Camaro.

All of the aforementioned drivers are ineligible for series points.