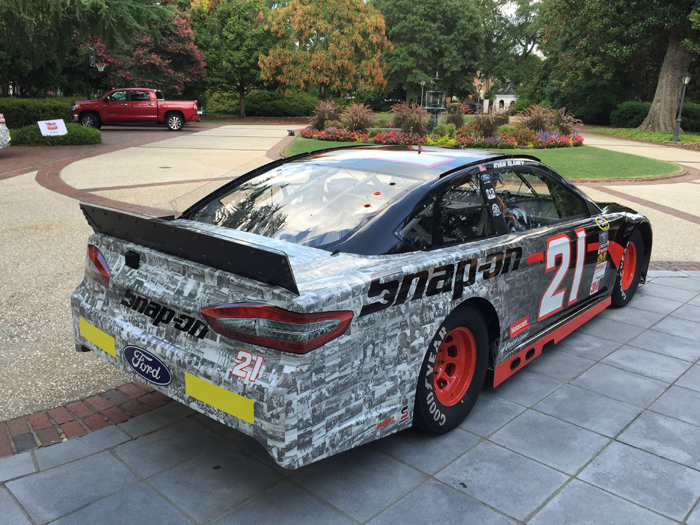 For many old-school fans, the Wood Brothers represent a vital link to the glory days of NASCAR when ingenuity and courage could still trump manpower and horsepower.

Beginning in 1950, the five Wood brothers formed a racing team on their family farm tucked into the Blue Ridge Mountains in the rural community of Stuart, Virignia.

With Glen and Leonard taking the lead, the resourceful group of mechanics, farmers and sawmill workers found their niche in the fledging and dusty world of stock car racing.

Inspired by another ambitious sawmill operator and bona fide daredevil named Curtis Turner in nearby Floyd, Virginia, the Wood Brothers charged 98 NASCAR Cup victories in the iconic No. 21 Ford with legendary drivers such as David Pearson and Cale Yarborough while perfecting the delicate art of pit stops.

NASCAR traditionalists will get a treat Sept. 6 when Ryan Blaney drives a retro No. 21 Snap-on Ford in the Bojangles Southern 500 at famed Darlington Raceway.

The fast blast from the rich 65-year past for Blaney will feature a mosaic scheme including over 2,000 photos of the Wood Brothers and their associates dating back to their debut year in 1950.

“I’ve seen drawings of the car but to see it in real life, I think it looks great,” said Blaney in a statement to reporters.   “Just to get to drive the No. 21 for the Wood Brothers is an honor. So to run a car that honors their history in the sport and what they’ve accomplished over the years is even more special.”

The venue makes the race even more special for Blaney.

“With Darlington trying to do a retro, throwback feel to their race and Snap-on stepping up and allowing us to run this scheme, I think it will be one of the fan favorite cars out there,” he said.

While the Wood Brothers perfect the synchronized ballet that are pit stops,  Snap-on pioneered interchangeable socket wrenches 95 years ago and has been revolutionizing the professional hand tool industry ever since.

“When this idea was brought up to us, we thought it was a good program for our brand,” said Yvette Morrison, vice president of marketing for Snap-on Tools.  “We are excited to be a part of the Darlington race with Ryan and the Wood Brothers team.  The fact that we can help honor the rich tradition of the Wood Brothers team with the retro, mosaic paint scheme is something we are proud to do.”

According to Eddie Wood, who now co owns the team with his brother, Len, the retro ride is a fitting tribute to the legacy of his family.

“We are honored that Snap-on would want to run a car honoring our history in the sport,” Wood said.  “We are proud of what we have been able to accomplish in the last 65 years and the fact that we are still going strong.  Darlington is one of the tracks that really holds a special place in our heart as a race team, so we are pretty excited to see what the car looks like on the track.”

During the annual NASCAR Charlotte Motor Speedway media tour in January, Wood Brothers officials announced that Blaney would compete in 18 Sprint Cup races this season in the No. 21 Ford. That schedule includes the Aug. 22 IRWIN Tools Night Race at Bristol Motor Speedway.

During his media tour session in Charlotte, Blaney spoke of his admiration for the extended Wood Brothers clan.

“I've admired them ever since I was a little kid. How could you not admire them?” Blaney said. “Just looking back at their history and their family tradition of racing, with me coming from some family, too, it's really cool that everyone has really gotten along so far and we can talk about racing. That's all we want to do is race and win.

In eight Sprint Cup starts this season, Blaney has crafted an average finish of 15.0, with a fourth place finish at Talladega. That performance at Talladega, where Blaney qualified third, generated a buzz that Blaney could be in line for a full-time Cup ride in 2016.

Blaney drives for Team Penske in the Xfinity Series and earned his first win of 2015 Saturday night at Iowa Speedway.

For now, Blaney is focused on his time machine journey at Darlington next month.

The last victory for the Wood Brothers came in the 20011 Daytona 500 with Knoxville, Tennessee, native Trevor Bayne. The Wood Brothers fielded a car at Darlington for Bill Elliott in 2008.

“Every race I drive for the Wood Brothers is special,” Blaney said. “But Daytona and then Darlington is extra special because of the history they had at these two race tracks. It will be a really big treat for me – and for them.”