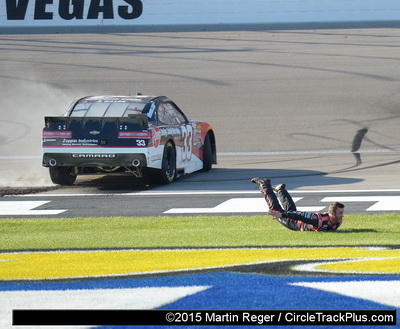 In addition to winning Saturday's race, Dillon also qualified on the pole for the event and was the fastest competitor in Friday's xfinity practice session.

Even though Dillon did lead a vast majority of the laps, he did not cruise to an easy victory. A hard charging Ryan Blaney forced Dillon to block almost every lane on the mile and a half racetrack over the final three laps.

"You gotta do what you gotta do to win," Dillon explained. "But to give one away like that would have been heartbreaking."

Behind the grip of four fresh tires, Blaney was able to recover from a late race incident and challenge for the win.

"I got a good run off four coming to the white and he did what he needed to do and stopped my run," Blaney explained.  "I think it was a good call to come in and put four on it and tighten me up some more. I was really loose all day and we didn’t have anything for the 33 all day and that gave us a shot at it. Hopefully next time.”

The late race incident which allowed Blaney to put on fresh tires took Erik Jones, driver of the 20 Interstate Batteries Toyota, out of contention for any kind of finish at all. Jones after contact from Blaney, shot up the race track and collided with the concrete wall ending his day.

Jones was not impressed with Blaney's ability to drive his race car.

“The 22 just lost it. Obviously not a lot of car control on his end today,” said Jpnes after exiting the care center. “Really unfortunate to be taken out that late. Had a strong car, one that I thought could have contended for the win," Jones said. "Wish we could have brought them home a better finish."

"I feel bad about what happened with the 20," Blaney said on Twitter Saturday afternoon. "Easy to get loose down there; definitely wasn't intentional by any means."

Team owner and grandfather Richard Childress saw the push Blaney was making toward Dillon in the closing laps, and Childress is no stranger to excitement in the final laps of NASCAR events.

"When I saw the 22 coming I thought the same thing as everyone else 'Oh crap'," Childress explained. "But it doesn't matter how many years you did this. It never gets old. It's still excitement right up to the finish."