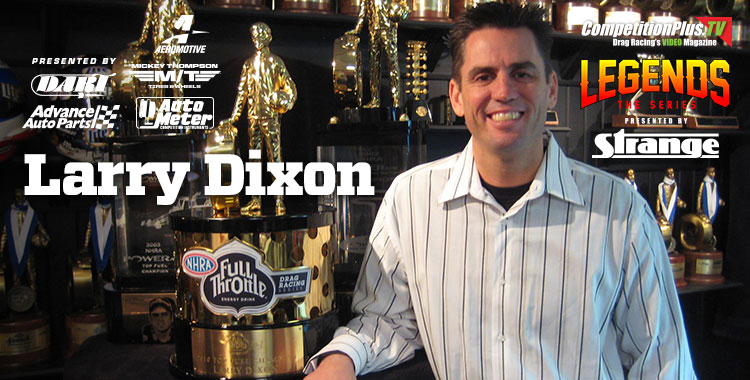 Larry Dixon may not think he’s a legend, but a body of work that includes 62 NHRA tour victories and Top Fuel championships with two different teams in two different decades would suggest otherwise.

Regardless, after beating cancer and emerging unscathed from some of the most spectacular accidents in the sport, the California native still is not ready to hang it up.

In this episode of Legends, the Series, season four, Dixon talks about his 20 years with Don “the Snake” Prudhomme, about winning the second pro race in which he ever drove, about the impact of his eventual departure from Snake Racing and about family, faith and life’s every day challenges.

“I had a lot of great cars, great teams, great runs, great jobs,” he says, “and then, not so much, (but) you gotta reset your goals. I’m working on stuff. I’m excited about things I got going on for the future. I don’t know what the future holds for me but whatever’s in store, I’m excited about it and, when I get there, I’ll appreciate it.”

With a candor that has been both a benefit and a bane during his career, Dixon talks about how “being a dad is way cooler than winning a championship,” about the “James Bond moment” he experienced upon first hitting the gas in a Top Fuel dragster and about how he feels safer in a 330 mile-an-hour race car than he does in his pickup truck.

So, settle in and absorb a little homespun wisdom from a man who’s “just out here trying to be a good person and a role model (for my kids),” a man who knows from experience that “every man dies but not every man lives.”