SEASON 4 REWIND - LEGENDS: THE SERIES - THE LEGEND OF AL SEGRINI 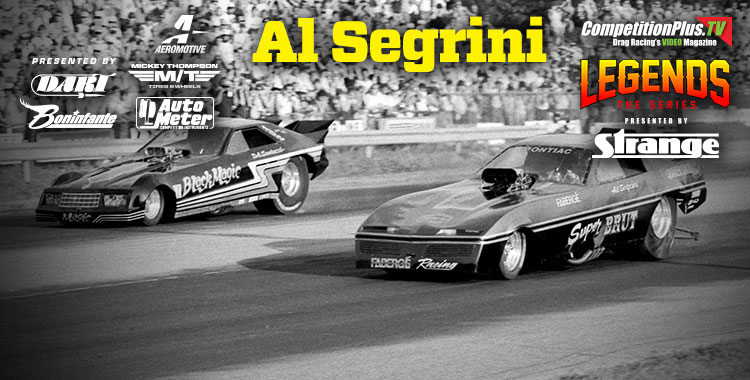 Al Segrini made the most of his short time racing in the NHRA. In fact, in his short career (1974-1984), he ran less than 60 total NHRA tour events. Nevertheless, he won five times, three times in the season-opening Winternationals, and his impact on the sport of drag racing is inescapable.

A protégé of the late, great “Jungle Jim” Liberman, for whom he once worked as a volunteer crew member, cleaning parts and steering the race car back to the pits, Segrini got his start driving the “Boston Shaker” Funny Car for a recovering Kosty Ivanof, who would introduce him to one of the individuals who would change his life, Jim Beattie, the founder of ATI.

The result of their collaboration was the creation of one of the era’s most celebrated Funny Cars, the Kenny Youngblood-designed “Black Magic” Chevy Vega that claimed “Best Appearing” honors in its debut at the 1974 Gatornationals. It’s the same car in which four months later Segrini would win his first major race, the NHRA Summernationals at Englishtown, N.J., with his idol, Liberman, in the other lane.

There followed a stint at the wheel of Fred Castronovo’s Custom Body Enterprises Plymouth Arrow, a sponsorship coup that turned the sport around and, finally, a curtain call at the wheel of Joe Pisano’s Dodge Daytona at the ‘85 Winternationals. Segrini made a short run at Top Fuel, but for the most part was content to ride off into the sunset.

In this episode of Legends, the Series, season four, “Action Al” talks about how “Jungle” shaped his career, about outfitting his crewmembers in matching uniforms for their Gainesville debut, about sharing the stage with Joe Namath and Farrah Fawcett as a pitchman for 1980s’ sponsor Brut/Faberge and about how drag racing has changed – and not always for the better.

So, listen, laugh and learn from one of the sport’s biggest personalities. - Dave Densmore