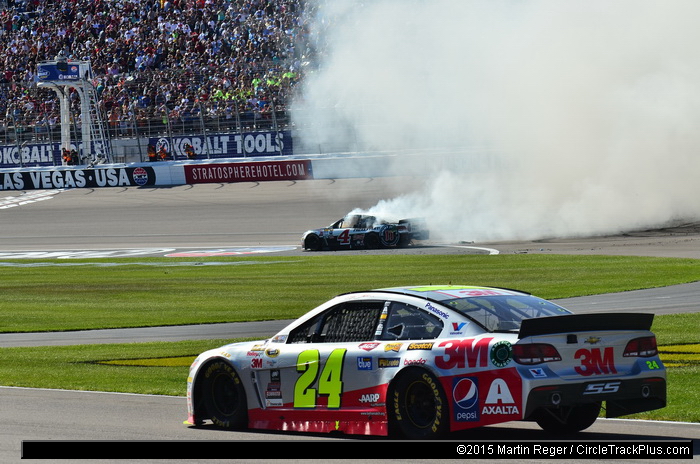 Kevin Harvick scored his sixth consecutive first/second place finish as he captured the win in the Kobalt 400 at Las Vegas Motor Speedway. He also shredded his right year tire as he celbrated his first win of 2015 in the third race of the season.

“It’s so cool to win here in Las Vegas and start this West Coast swing off this way is pretty awesome,” exclaimed Harvick from Victory Lane. “Just to be in front of all these fans I’ve raced in front of since about the mid-‘90’s. It’s pretty special to win here. I’ve got to thank Jimmy John’s, Budweiser, Chevrolet, and everybody on this car that makes it go around; and all these guys and everyone at Stewart-Haas for what they do.”

Harvick might have been in trouble had Truex, Jr. closed the gap faster.

"He was getting bigger in my mirror, but I believe he was playing with everybody,” thought Truex Jr. “He was just really, really strong. I was proud that we fought the way we did. We were off a bit at the start of the race, and got better throughout the day. At the end of the day we were the best that we were all day. I think without going to the garage and making a little adjustment we felt like we needed, we probably weren't going to get even close to the No. 4 (Kevin Harvick). Live and learn. Those guys have been really strong for a year. And we are just getting our stuff rolling. Hopefully we'll get it tuned up and be able to run with them soon."

For both Jimmie Johnson and Jeff Gordon the day did not go as planned. Gordon was involved in awreck in the final minutes of the final practice on Saturday forcing the team to go to a backup car and Gordon to fall back from the pole position to 43rd jiust prior to the waving of the green flag. Gordon moved forward but lost his battle when Johnson had issues.

“I guess Jimmie (Johnson) blew a right front tire,” started Gordon. “I was right behind Jeb (Burton) getting ready to make a move on him. I wasn’t sure if I was going to go inside or outside, but all of a sudden he started checking up and I thought he was doing it to let me go by him and I didn’t realize until right at that moment when my spotter said something to me that Jimmie was having a problem; and I ran into the back of him. It ruined our day with this 3M Chevrolet and certainly ruined the front end. Our car just wouldn’t go down the straightaway and it was real tight.

“Man, we were coming. We had one weird set of tires. We drove up there right at the beginning and the car was amazing on rails. The next set of tires, the thing was just terrible loose. So we made an adjustment and then the car went back to being tight. So, I don’t know what happened there, but that got us off a little bit. But it was a great effort. I just can’t believe the way these days are going.”

The tire blow for Johnson was his second, not his first.

“Yeah, the first one, they said the bead blew on it. We don’t have any brake temp here, so I don’t know what could have caused that. That’s kind of a freak deal. The second one, it went soft. So there could have been some damage that caused it or some rub or something like that, and it went soft going into Turn 3 and I hit the wall, unfortunately. I’m disappointed. We certainly had an awesome race car. I wish we could have won this KOBALT race in this KOBALT car, but we’ll come back next week.”

The next Sprint Cup Series race is just a couple of hundred miles south of Las Vegas in Phoenix, Arizona.