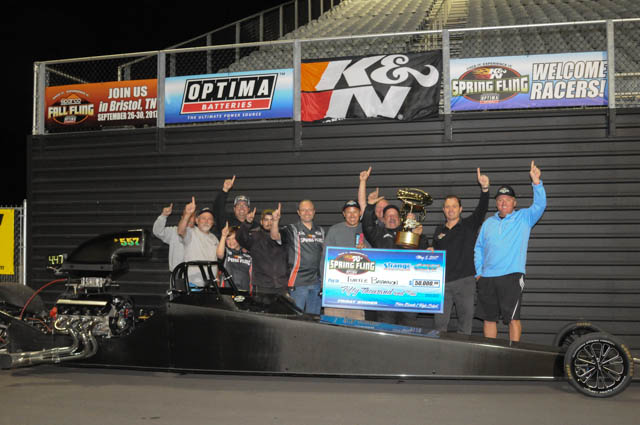 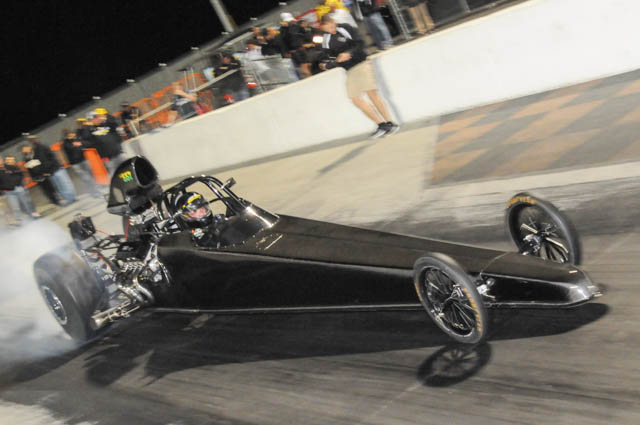 In the quarter-final round, Alford took out Plott’s dragster, NHRA champion Kevin Brannon’s father Turtle received the automatic win when Gantkowski red-lighted, and in the final pair prior to Cable’s bye run, Plott hung on with his Mustang to defeat Carr. The semifinals will be two door cars against two dragsters, with the pairings being the dragsters of Alford and Brannon racing each other and Cable and Plott facing, assuring at least a door car making it to the final round.

In the semis, Plott and Cable faced off with Cable taking the win and making his second final round appearance this week. In the other half, Alford’s car got out of the groove and was forced to lift to hand the win to Brannon.

For the final, Turtle proved his son isn’t the only Brannon who can turn on win lights as his dead-on the dial with a “0” and a .022 reaction time was enough to force Cable to run out.

“I have to thank the good Lord,” said Brannon, “as every round I was just praying to get it done.”

Naturally though, his final round opponent Cable has been a staple in Spring Fling history, with several wins, a points championship, and even his second final round appearance this week.

Day “last” will take place on JEGS Saturday where racers will once again race for $20,000 to win. First up in the morning will be the Spring Fling Reaction Time Challenge followed by eliminations on the last day of the K&N Spring Fling presented by Optima Batteries. With sponsorship from JEGS and Mickey Thompson Tires, the action will again be live at MotorManiaTV.com or www.bracketraces.com.