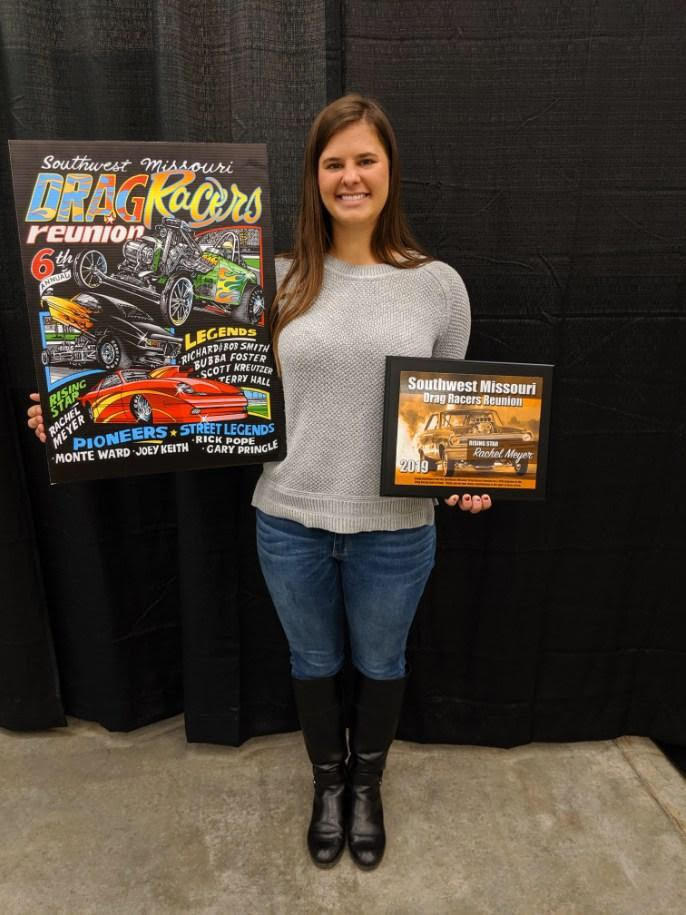 In November, Rachel Meyer was inducted into the Southwest Missouri Drag Racers Reunion Hall of Fame. She entered the Hall as their Rising Star.

A committee selected Meyer to be a part of the Class of 2019. She entered the Hall in their sixth class.

“It’s a great honor,” Meyer said. “There were a lot of people who got inducted. It’s an honor that they noticed me and selected me to be in the class. They noticed my dedication and hard work at racing. I’m not always the best – but they can tell that I give it my best, and I truly enjoy it. I try to go every single weekend that I can. It’s nice to be noticed for something that you’re passionate about.”

Meyer was selected for being a true sportsman.

“I got an award last year from Mo-Kan, a sportsmanship award, as I tend to stick around until the races are over to see who wins and how my friends do,” she said. “I want to see how they do, especially if I’m not still in the race. I enjoy being there and seeing everyone. It’s fun being there.

The Meyer sisters are proud of each other’s accomplishments. And they love each other.

But Rachel was excited to receive this honor. 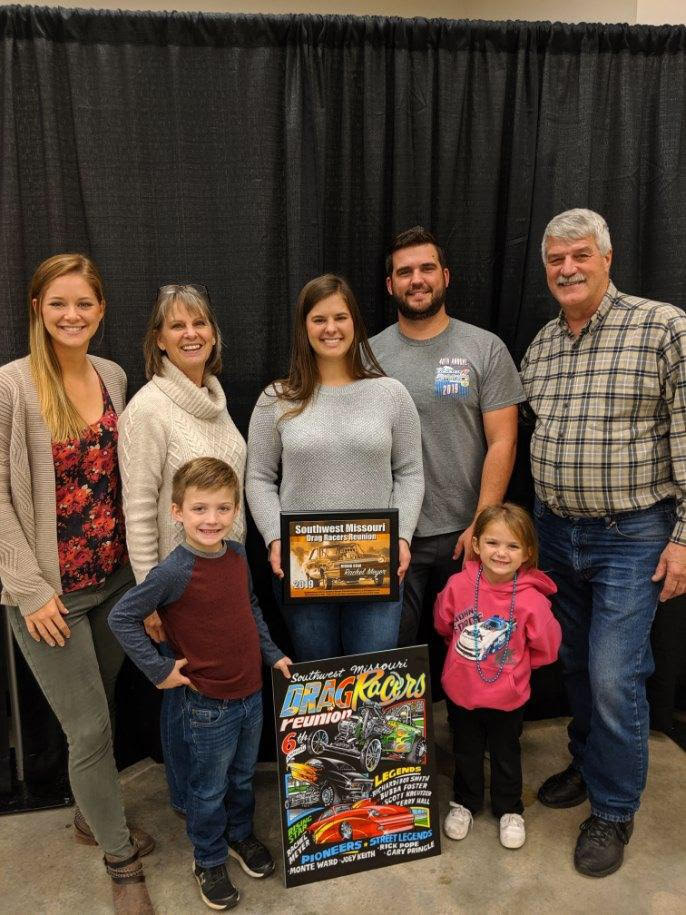 “I’m the first one,” Meyer said. “This may sound mean, but Megan always seems to get every award before I get it. Or every new car before I get it. It seems to me that she does, so to me, this is like, ‘Wow, this is something that I got that Megan hasn’t.’ Megan is older than me, but I always look up to her and my dad. It’s nice that someone recognized me and not Megan or my dad.”

Meyer, who is a product/machine design engineer at Leggett & Platt, completes in bracket races when she can in her Super Comp Dragster. She also competes in Top Alcohol Dragster at select races on a part-time basis.

This Hall of Fame honor recognizes her bracket racing in Kansas and Missouri.

“The track that I race the most is at Mo-Kan Dragway, and it’s right on the border of Missouri and Kansas,” she said. “They host about 14 regular bracket races a year. They’ll also have several big-money races, like during Memorial Day weekend and July 4th weekend. It’s only an hour away from where I live. It’s fun to load up every weekend and head out there to have fun with my friends when I can. It’s nice to know the people out there have become my family, as my parents cannot come to those races, as they’re always off traveling to a Divisional or National event.

“It’s nice seeing the hospitality at that track. Everyone is willing to help me out if I’m in a pinch if I ever need it. That makes me want to keep going out to that track because of how nice everyone is out there. It’s very humbling because even if you don’t win, people don’t seem to get upset out there, and everyone is a good sport out there.”

Meyer’s achievement was also the latest in a banner year for Randy Meyer Racing. Randy Meyer and his brother celebrated their 40th year in drag racing in 2019.

In addition, Megan Meyer won the Top Alcohol Dragster Championship. She became the first female driver ever to achieve this feat.

“It was great to have the success that we did in 2019,” Meyer said. “I was there with my sister when she won Indy. She defeated me in the semifinal before defeating Troy [Coughlin Jr.] in the final round. I have been with her through all the local races that I could go to with her and see her win or us battling it out against each other.

“My uncle got started with my father 40-years-ago – and he has a couple of kids, who race still – and they come out to the track. That’s where we’ll see them the most. The race track brings us together as a family.”