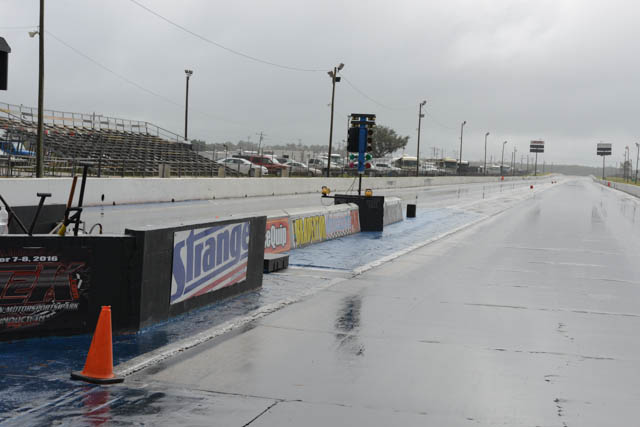 The plan was to finish that race and then roll right into the final $10K-to-win race originally scheduled for Sunday. Best laid plans of mice and men. The rain continued overnight forcing track officials into a drying session prior to racing continuing. With the delay, it became obvious trying to get two races in wasn’t feasible. As such, the decision was made to eliminate the final race, refunding everyone’s entry money, and continue with the Brown & Miller Racing Solutions portion of the event.

Once again, best laid plans of mice and men… With two rounds completed, Mother Nature came back with a vengeance prior to running the third round. Track officials made a valiant effort to dry the surface, but with a very wet race track and more rain eventually falling, the unfortunate decision had to be made to cancel the entire event and split the purse money between the remaining competitors.

Everyone involved from Scott Richardson, Jeff Stange of Strange Engineering, along with Alan Chervitz and his staff at Bradenton Motorsports Park are especially appreciative of all the racers who chose to attend and stick out the weather delays. “It was an unfortunate situation and a very tough one to decide, but in all fairness to the racers, it was only the right thing to do,” said Richardson. “I’d like to thank everyone for coming and their patience, and I hope to see all next year.” 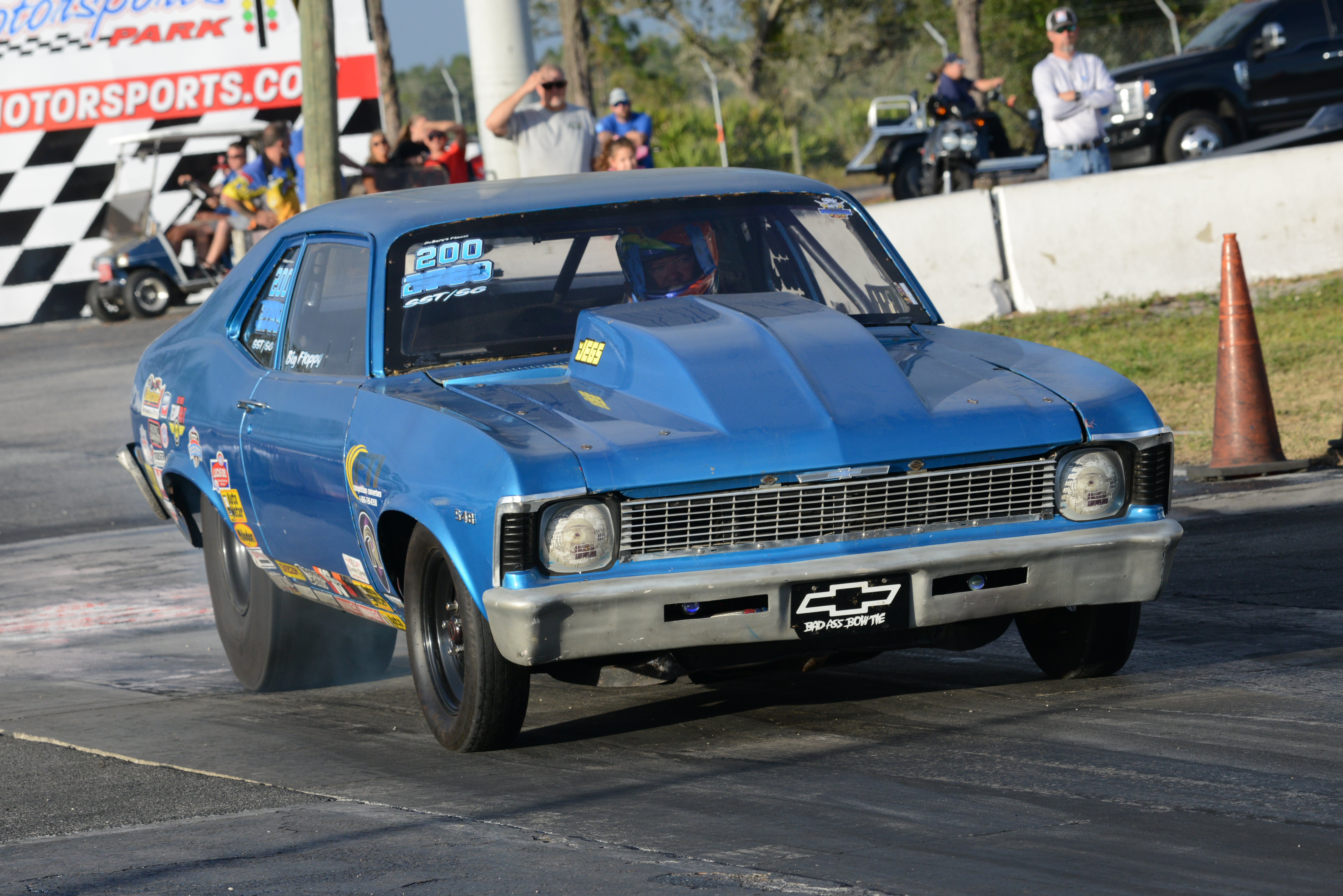 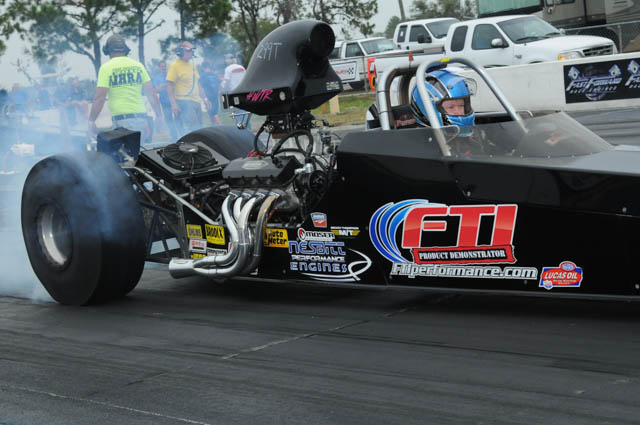 Saturday dawned with typical Florida sunshine and blue skies over Bradenton Motorsports Park for the 4th edition of the Fun In The Sun bracket series presented by Lucas Oil and Drag Racing Edge magazine.

Friday’s festivities were cut short at ten cars by a dropping temperature and an encroaching dew point. The decision was made to continue the round in its entirety along with reinstating Mike Bloomfield who won prior to the stoppage but crashed his car after the finish line.

For round seven, Butler received the odd car bye with Guerra and Williams moving on. Semifinal round, Guerra received the bye to ensure at least one door car in the final, while Williams and Butler did battle with Williams coming out on top.

In the finals, two close friends faced off and it was battle all the way, with Guerra’s door car receiving the handicap start leaving with a .004 reaction time. Williams wasn’t far behind with his own .003 reaction time making it a true finish line race with Williams taking a tight .002 of a second victory. 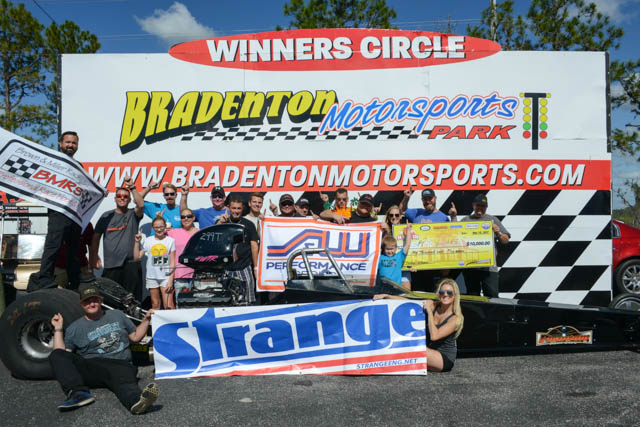 Round seven, Williams defeated Roberts, Crosby took out Valli and Keen broke off the starting line to hand the win to Johnson. For the semifinals, Crosby took the bye to the final while Williams and Johnson battled it out with identical reaction times, but it was Williams taking a .004-second victory at the finish line. The final was a little anticlimactic as Crosby broke on the starting line to give Williams the room at the finish line for his victory.

Race No. 2, the Brown & Miller Racing Solutions $20K-to-win tried to get started after Race No. 1’s final, but a slight rain cloud forced officials into a hold pattern. Once the rain was out of the area and the track was dry, racing continued. Unfortunately, the rain came back a number of times halting action for several minutes before it came back with a vengeance halfway through the second round. An executive decision was made to halt the activities for the night and continue bright and early on Sunday morning when the Brown & Miller Racing Solutions $20K will be completed followed by Race #4 of the weekend, a $10K-to-win affair.

FUN IN THE SUN – FRIDAY EDITION 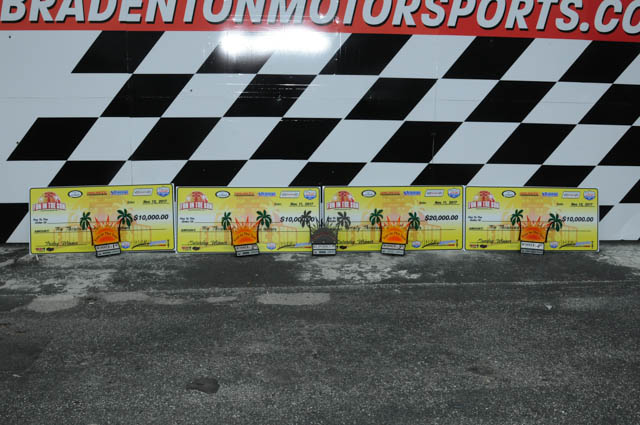 The sun didn’t exactly shine on Day 1 at the Fun In The Sun bracket series race at Bradenton Motorsports Park in Florida, but it was still 75-degrees with no rain. That didn’t matter to the 160 cars which showed up for the first round of eliminations who didn’t care about the cloudy skies one bit.

First up was a single time trial session followed by a Run for the Money time run where racers placed a dial-in on their car and the best package; a combination of reaction time and amount over the dial-in; took home some money. Manuel Soler from Orlando, Florida started off his weekend in a good way with a .003 package to win some money.

Round five found ten cars left; Mike Bloomfield, David Guerra, Trevor Beard, Alan Glatt, Jeremy Bargo, Mia Tedesco, Robby Officer, Gary Williams, Tim Butler, and Camryn Frederickson. Despite the fact it’s Florida, the dew point was becoming close enough to the temperature that the track surface was going away. The first pair of cars got loose and in the second pair, Bloomfield crashed after which the decision was made on the side of safety with as much money is on the line. The entire round will continue in the morning.

Saturday’s original schedule called for a time run followed by two complete races, first a $10,000-to-win race and the Brown & Miller Racing Solutions $20,000 race. With Race No. 1 still to be completed and a number of new entries rolling in tonight, Saturday will certainly be a long day.